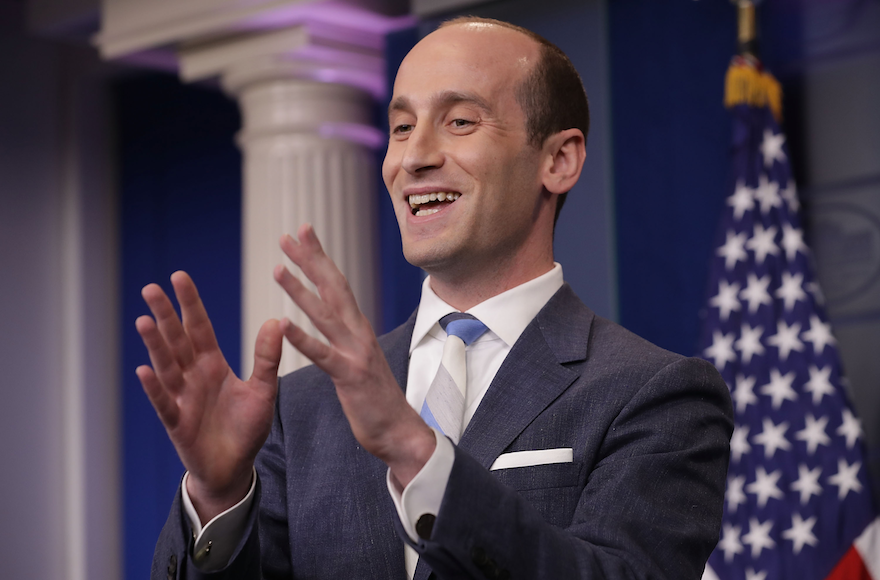 (JTA) — The uncle of Stephen Miller, a senior adviser to President Donald Trump, has accused his nephew of being an “immigration hypocrite” who supports policies that would have condemned his own Jewish family to death if they had been enacted a century ago.

Writing in Politico, Miller’s maternal uncle David Glosser described how Miller’s great-great-grandfather Wolf-Leib Glosser fled the Belarusian shtetl of Antopol, arriving in the United States in 1903 “with $8 to his name.”

“In the span of some 80 years and five decades, this family emerged from poverty in a hostile country to become a prosperous, educated clan of merchants, scholars, professionals, and, most important, American citizens,” wrote Glosser, a longtime volunteer with the Jewish-run refugee agency HIAS.

Miller, an immigration hardliner, has been instrumental in the administration’s crackdown on immigrants, including last year’s travel ban targeting seven Muslim-majority nations and the separation of migrant children from their parents at the border. Earlier this month, he was said to be behind a Trump administration proposal that would make it more difficult for legal immigrants to obtain a green card or become citizens if they have used public welfare programs.

“I have watched with dismay and increasing horror as my nephew, who is an educated man and well aware of his heritage, has become the architect of immigration policies that repudiate the very foundation of our family’s life in this country,” Glosser said.

“I shudder at the thought of what would have become of the Glossers had the same policies Stephen so coolly espouses … been in effect when Wolf-Leib made his desperate bid for freedom. The Glossers came to the U.S. just a few years before the fear and prejudice of the ‘America First’ nativists of the day closed U.S. borders to Jewish refugees. Had Wolf-Leib waited, his family would likely have been murdered by the Nazis along with all but seven of the 2,000 Jews who remained in Antopol. I would encourage Stephen to ask himself if the chanting, torch-bearing Nazis of Charlottesville, whose support his boss seems to court so cavalierly, do not envision a similar fate for him.”

Glosser went even further, comparing Trump, and by extension his nephew, to Nazis.

“Trump and my nephew both know their immigrant and refugee roots,” he wrote. “They repeat the insults and false accusations of earlier generations against these refugees to make them seem less than human. Trump publicly parades the grieving families of people hurt or killed by migrants, just as the early Nazis dredged up Jewish criminals to frighten and enrage their political base to justify persecution of all Jews.”

This is not the first time that critics have pointed out the immigrant history of Miller, who has said that he believes in favoring immigrants who already speak English over those who do not. Earlier this year, amateur genealogist Jennifer Mendelsohn posted data from the 1910 census showing that Miller’s great-grandmother did not speak English. Her post was retweeted 17,000 times.