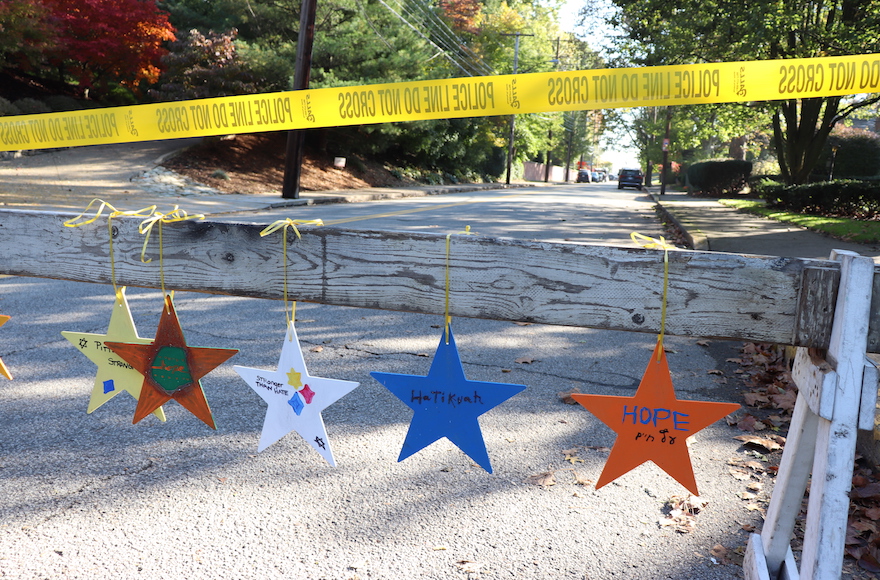 The stars now hanging in the Squirrel Hill neighborhood of Pittsburgh were painted by children from a Manhattan synagogue, but more are  coming from the survivors of other mass shootings. (Hane Grace Yagel)

PITTSBURGH (JTA) — In the middle of the day on Tuesday, above a growing pile of wilting flower bouquets and sympathy cards, five wooden, five-pointed stars hung on a signpost in front of Tree of Life Congregation, where 11 Jews were gunned down three days before.

Similar stars hang around the world at sites of other mass shootings known now by the shorthand of the cities where they took place: San Bernardino. Orlando. Newtown. Parkland.

Now they hang here, brightly colored and carrying messages of comfort and strength. One, painted yellow with five red hearts at its points, reads “Love.” Another — green, blue and pink — says “life.” A third, painted in red and blue stripes, has a variant of the same word in Hebrew: “Chai.”

Other stars hang on telephone poles and building frames. A row of 11, in plain white with black lettering, carry the names of the victims.

The stars come from a project called Stars of Hope, which organizes communities to paint stars like these for victims of disasters. The stars are then hung in the affected communities, and tend to stay up even as other memorials are cleared away.

“This is how you bring hope and healing back, to let them know that there’s good and there’s compassion and people care,” said Jeff Parness, the founder of Stars of Hope, who drove here from his home in New York City following the shooting.

“People want to do something tangible, but what do you do in a tragedy like this?” he asked. “You can’t bring people back. [But] you can hug them with love and you can express your compassion through art.”

The stars now hanging in Squirrel Hill, the diverse Jewish neighborhood where the shooting happened, were painted by children from Congregation Rodeph Sholom, a Reform synagogue in Manhattan. But more stars are coming from survivors of the 2015 mass shooting in San Bernardino, California, as well as the 2016 mass shooting at the Pulse nightclub in Orlando, Florida.

Parness began working on disaster relief in 2003 owing to his son, then 5 years old, who inspired him to drive a truckload of supplies from New York to San Diego to help victims of the wildfires raging in the Southern California city. For Parness, it was a way to show gratitude for the help New Yorkers received after the 9/11 attacks in 2001.

The side of the truck read “New York Says Thank You.” Parness, formerly a finance professional, ended up founding and running a nonprofit of the same name that helps rebuild the homes of disaster victims and first responders, along with educating students and others on good citizenship.

Stars of Hope was born out of that effort in 2007. It has since helped 220 communities in 26 countries, according to its website. Its beneficiaries range from victims of mass shootings and natural disasters — as far flung as the 2015 earthquake in Nepal — to a teacher fighting cancer in Tulsa, Oklahoma.

“There’s so much love and so much compassion that you have to pay it forward,” he said.

But the Pittsburgh shooting has special resonance for Parness as a Jew. Soon after the shooting, on Saturday afternoon, Parness posted a photo on Facebook of family members who were killed in the Holocaust.

And on Tuesday, though he generally goes without one, Parness chose to wear a kippah. He said it was a message that the gunman would not scare him.

“You can’t be afraid of this stuff,” he said. “He wanted us to be afraid. There’s evil everywhere, but as Jews, we also have the responsibility to bring light into the world.”

The post Stars of Hope brings comfort to Pittsburgh with the help of trauma survivors appeared first on Jewish Telegraphic Agency.