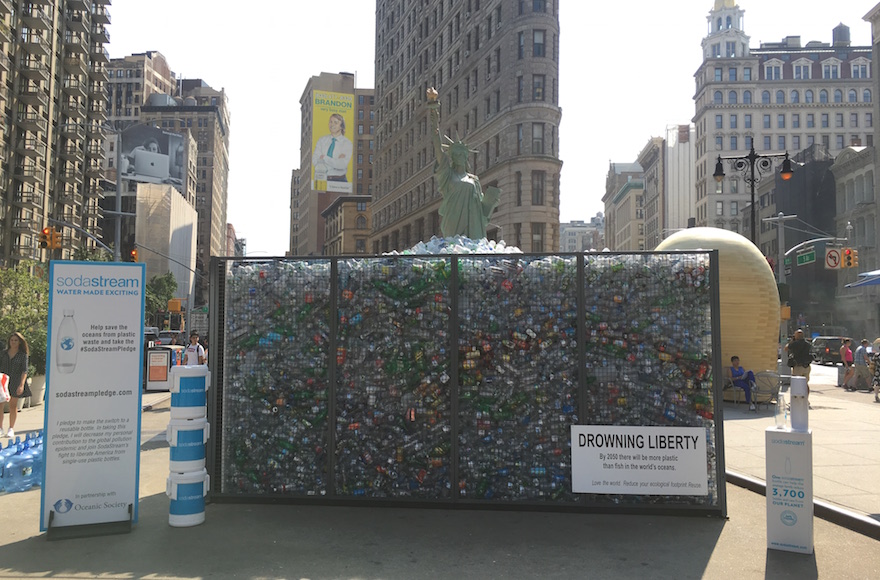 NEW YORK (JTA) — Tourists and locals wandering around Flatiron Plaza in downtown Manhattan were met with an unusual sight: a 20-foot replica of the Statue of Liberty standing in a steel cage filled with empty plastic bottles and metal cans.

On the other side of the eye-catching set-up, titled “Drowning Liberty,” were booths with people handing out glasses of seltzer. The installation, on display Monday to Wednesday, was organized by SodaStream, an Israeli company that sells at-home carbonation kits, together with the Oceanic Society.

Its goal is to raise awareness of the negative consequences of single-use plastic (and drum up business for the company while they’re at it). Passers-by were encouraged to sign SodaStream’s sustainability pledge, promising to eschew one-use bottles for reusable ones. The company claims that making soda at home in reusable bottles results in “less plastic manufactured, less plastic waste and less transport of bottled beverages.”

“We have no choice,” SodaStream CEO Daniel Birnbaum said in a statement. “We have to go reusable. Annual plastic production is skyrocketing and the U.S. is one of the biggest polluters in the world.”

Among those who stopped by to sign the pledge on Tuesday was Adrian Grenier, an actor known for his role on the TV series “Entourage.” 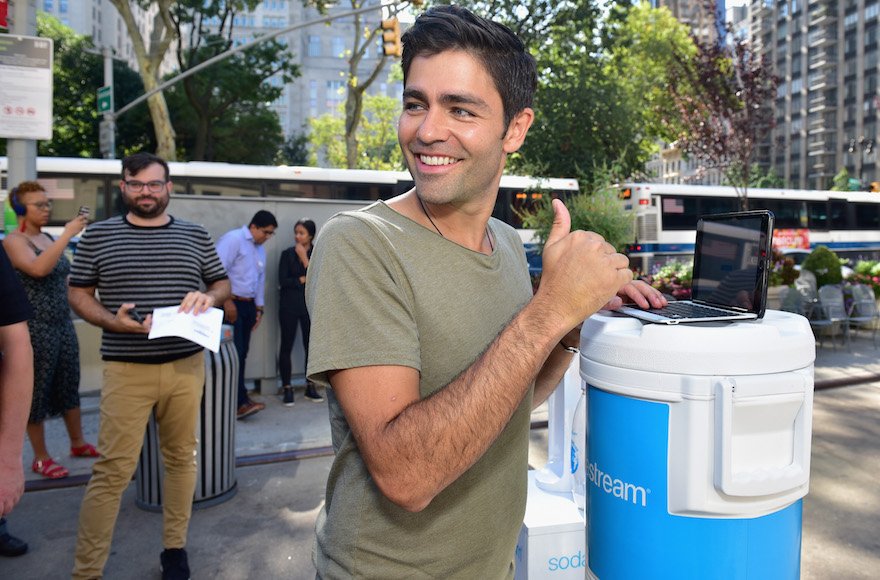 On Wednesday, passers-by who paused to take photos and have a drink of seltzer told JTA that the set-up resonated with them.

Henry Ortega, 24, said that seeing Lady Liberty up to her waist in plastic bottles reminded him of the importance of not littering.

“As you know, the City of New York is dirty in the streets,” he said. “This can actually give us an open mind that we’ve got to wake up. It’s a wake-up call.”

Azinat Axorova, a 28-year-old visitor from Russia, said the statue made her think of what she had observed about Americans’ consumer habits.

“Americans use a lot of things that they don’t need,” she said. “Consumption in this country is so vast that there is so much waste that you don’t even think about it.”

SodaStream isn’t without controversy. The company — and its spokeswoman at the time, Scarlett Johansson — was the target of anti-Israel boycotts because it maintained a factory in a West Bank settlement. (The company said at the time that it employed Jews and Arabs.) In 2015, SodaStream closed its West Bank location and moved its operations to southern Israel.

The post SodaStream is behind this 20-foot Statue of Liberty replica drowning in plastic bottles appeared first on Jewish Telegraphic Agency.