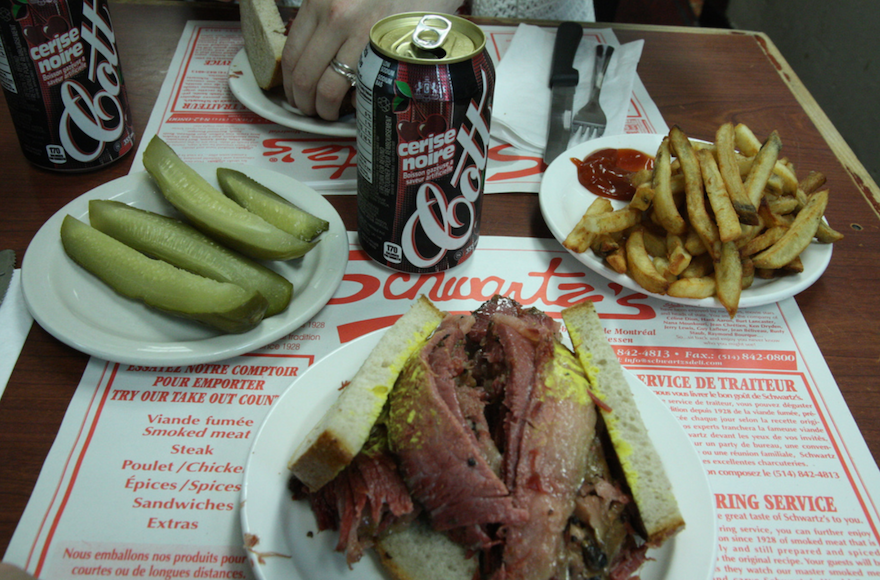 A can of Cott black cherry soda seen at Schwartz’s deli in Montreal. (kaworski/Flickr)

(JTA) — Canadians may be able these days to blame U.S. President Trump for a lot of things.

But a shortage of cherry soda to go with their classic smoked deli meats isn’t one of them.

CBC News reported Friday that Montreal’s iconic Jewish deli, Schwartz’s, had run out of cans of Cott Black Cherry Soda. This is a big deal for consumers of Schwartz’s famous smoked meat, an astonishing half of whom insist that nothing goes better with the salty tang of cured brisket than a sickly sweet cherry-flavored pop.

When Schwartz’s recently ran out of Cott’s, some were quick to blame the trade war between the U.S. and Canada. The Trump administration imposed levies on Canadian goods in July, leading Ottawa to retaliate with tariffs on aluminum imports, including cans, from the United States.

But it looks like a shortage on aluminum cans precedes the trade wars. Craft beer brewers and sparkling water makers have been increasingly shipping their products in cans over bottles, creating a demand that can manufacturers have been unable to meet, according to Manufacturing America, a trade publication. “Brewers have sometimes had to wait weeks or months for orders of cans to be fulfilled,” they write.

A spokesperson for the Cott Corporation confirmed to the CBC that the soda shortage is unrelated to the tariffs.

“The bottling industry is currently facing can shortages throughout the United States and Canada,” said Kim Wawro, spokesperson for Refresco North America, which purchased Cott Corporation earlier this year.

So what’s a deli aficionado to do? Montreal has smoked meat, New York has Dr. Brown’s Black Cherry Soda. Is a meet-up at the border out of the question?