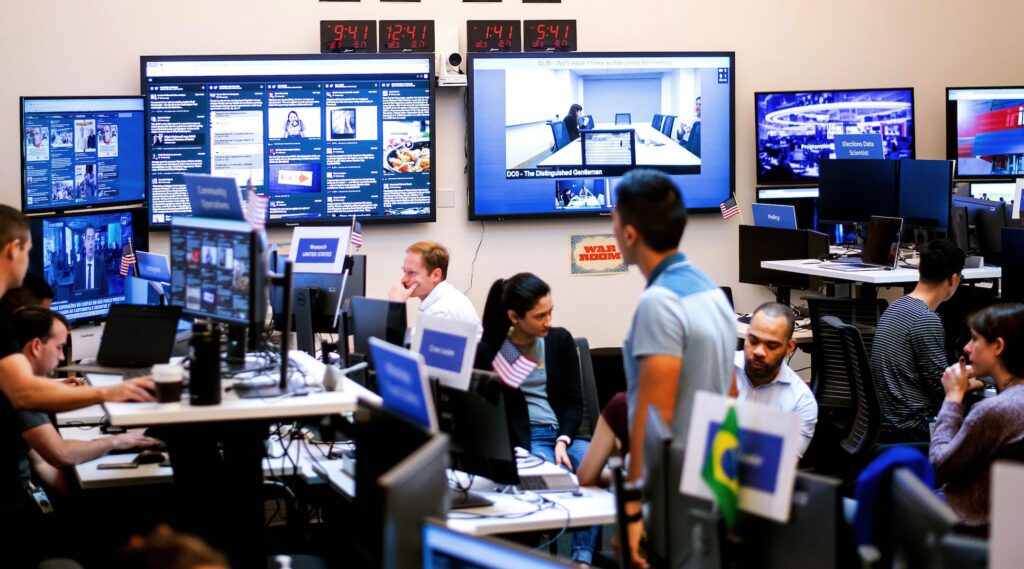 (JTA) — As of Wednesday afternoon, one of the first results in a Facebook search for “Holohoax” — a term popular with Holocaust deniers — was a post decrying “Zionist White Jewish Supremacist Child murdering Apartheid State, Talmudic Satanic Holohoax promoters.”

Right below it was a video, posted by a group with more than 6,000 followers, captioned “Research: Holohoax and Jew world order.”

These results showed up six weeks after Facebook announced that it was banning Holocaust denial and distortion across its platforms, including Instagram.

When it made the announcement, the company pledged that it would direct users to resources that provide credible information about the Holocaust. Those resources have yet to appear on the site.

In contrast, similar resources do appear on searches for the QAnon conspiracy theory, which Facebook announced it would ban approximately one week before announcing the ban on Holocaust denial. And QAnon groups appear to have been removed after that announcement.

It’s not just “Holohoax.” A page for the Institute for Historical Review, a Holocaust-denying organization masquerading as an academic center, is active and has more than 1,000 likes as of Wednesday afternoon. A recent post on the page links to an article titled, “Israel’s power is unlimited.” A post from earlier this month laments the “great loss of life and terrible suffering endured by the German people during the Second World War.”

A box on the side of that page labeled “Related Pages” directs users to several pages that either deny the Holocaust or spew blatantly anti-Semitic rhetoric. The Institute for Historical Review group and its related pages were first reported by the tech publication The Markup.

One, with 531 likes, is called “Goy Lives Matter” and features a stream of blatantly anti-Semitic posts and links. One example is a link to a website purporting to give information about the “The Jewish Ethnic Cleansing Of Europeans.” “Goy,” a Hebrew term that means non-Jew, has been appropriated by white supremacists.

Another far more popular page, with more than 11,000 likes, is called “Open Borders for Israel,” a trolling phrase that has become a slogan among white supremacists. The slogan implies that Jews are hypocritical because white supremacists believe Jews are trying to flood America with non-white immigrants, but Israel does not have a liberal immigration policy.

A version of the page’s logo includes Pepe the Frog, a cartoon appropriated by white supremacists. One of its posts is a meme featuring a visibly Jewish man saying “America is a nation of immigrants” and then, when someone asks him why Israel doesn’t absorb refugees, responding, “You’re being antisemitic.” Another post featuring a picture of Harvey Weinstein saying, “Israel won’t need to open its borders to the world to let Weinstein in. It only lets Jews in.”

The pages and posts — and others like them — show that more than a month after it pledged to remove content that denies or distorts the Holocaust, Facebook has yet to do so. The persistence of Holocaust denial on Facebook underscores the challenge social media giants face as they try to fulfil recent pledges to root out hate and misinformation from their platforms.

Spokespeople for Facebook, as well as a Jewish organization that’s working with it on these issues, say the social media giant is working hard to implement the policy. But they caution that it will take more time to refine artificial intelligence tools and create training materials for human moderators that can assist in recognizing Holocaust denial.

A spokesperson for Facebook said the company catches the vast majority of hate speech on the platform. The spokesperson told JTA that the company has 15,000 people reviewing content to monitor for hate speech and other violations. According to the company’s data, Facebook detects 95% of hate speech posts before users report them. And another recent report by the company says that from July to September, hate speech accounted for only 10 or 11 out of every 10,000 times someone viewed content on Facebook. (Given the billions of users Facebook has, that still results in a potentially enormous number of people viewing hate speech.)

“Detecting hate speech is not only a difficult challenge, it’s an evolving one,” the spokesperson wrote. “A new piece of hate speech might not resemble previous examples because it references a new trend or some new news story. We’ve built new tools so they can scale to future challenges as well as present ones. With more flexible and adaptive [artificial intelligence], we’re confident we can continue to make real progress.”

The spokesperson said the company has no further information on when or how it will direct users to credible external materials about the Holocaust. Facebook likewise said it would not detail its training materials or criteria for determining what constitutes Holocaust denial, out of concern that that would allow bigots to “game the system.” Facebook’s “Community Standards” likewise do not specify what counts as Holocaust denial or distortion.

Facebook has been more active on enforcing at least one other recently announced policy. On October 6, six days before it banned Holocaust denial, Facebook banned groups and pages promoting QAnon, the pro-Trump conspiracy theory with anti-Semitic overtones. Just 15 days later, the company announced that it had put links in place to credible information that users now see when they search for QAnon. No such links exist, as of yet, regarding Holocaust denial.

That Facebook is banning Holocaust denial at all is itself a major shift. Two years ago, Mark Zuckerberg told the tech publication Recode that he saw Holocaust denial as a lack of knowledge as opposed to an intentional expression of anti-Semitism. “I don’t believe that our platform should take that down because I think there are things that different people get wrong,” he said.

Zuckerberg’s statement sparked an outcry among Holocaust scholars. Earlier this year, a coalition of civil rights groups led by the Anti-Defamation League and NAACP organized a boycott of Facebook ads that grew to include more than 1,000 companies.

Now, in the face of that activism as well as studies showing that anti-Semitism is rising while knowledge of the Holocaust is decreasing, Facebook has done an about-face. The company ‘now views Holocaust denial as willful anti-Semitism. And before announcing the ban on Holocaust denial, Facebook said it had banned more than 250 white supremacist groups.

“Denying the Holocaust is not just getting your facts wrong,” Monika Bickert, Facebook’s head of global policy management, said in a video interview last month with the World Jewish Congress. “We know that Holocaust denial is used as a way to actually attack and stoke hatred against Jewish people.”

Yfat Barak-Cheney, an official at the World Jewish Congress who has worked closely with Facebook on the Holocaust denial policy, said she believes the company is sincere about banning Holocaust denial. She expects the policy to be fleshed out, at the soonest, in a few months, and says her organization is in near-daily consultation with Facebook about it.

“I think it’s a bit early to make these reports and look into this,” said Barak-Cheney, the World Jewish Congress’ director of international affairs. “The announcement is there. It’s not something they are trying to avoid doing. They are very serious about it. They’re definitely dedicating resources to it.”

As the election season heated up earlier this year and public pressure mounted on tech companies to confront hate and misinformation, several large social media sites announced bans on conspiracy theories or different forms of bigotry.

Earlier in the year, along with banning QAnon, Facebook also said it was cracking down on other anti-Semitic conspiracy theories. TikTok banned white supremacist content in October. YouTube banned QAnon in October as well. In response to the stepped-up action against hate groups, many far-right activists moved their center of activity to Telegram, an encrypted messaging and social media app, and more recently to Parler, which bills itself as a social network without restrictions on speech.

And Facebook’s policies don’t always result in blocking haters from the site. According to a recent report by two groups that monitor extremism, Facebook and Instagram “directly host neo-Nazi networks with over 80,000 followers,” some of whom use the site to see merchandise. After the report was covered in the Guardian, Facebook said it removed the neo-Nazis.

“For too long Facebook has chosen to respond to hate on their platform only when there is enough public outcry over it,” ADL CEO Jonathan Greenblatt tweeted about the report. “Case in point: Facebook knowingly hosted this neo-Nazi network for years.”

But Barak-Cheney said that the problem was one she expected Facebook to tackle. While she doubts that Facebook will be able to detect all Holocaust denial, she expects the platform to find and prohibit “most of it.”

“It’s hard to detect, and it changes all the time,” she said. “All of it is going to be hard, but it’s not going to be a static policy.”