Sidney Shachnow, Holocaust survivor who went on to command US forces in Berlin, dies at 83 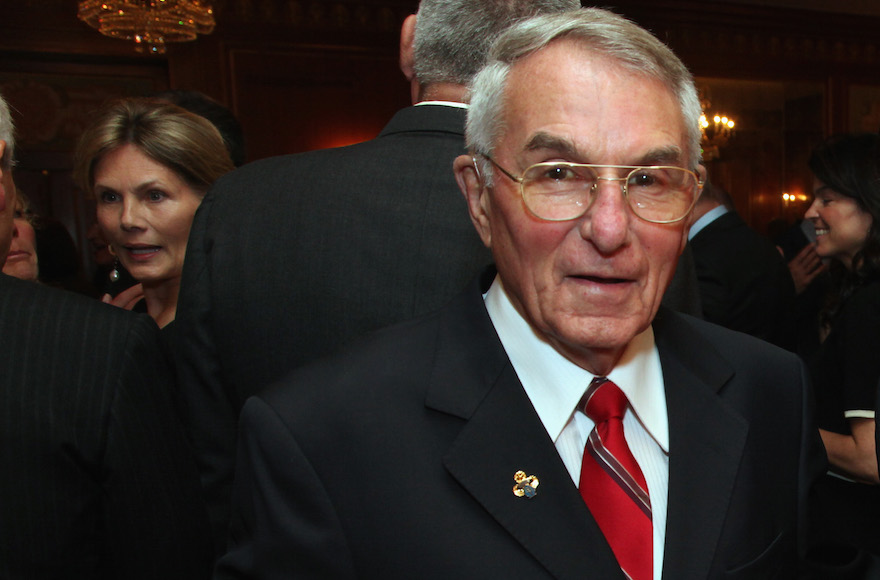 (JTA) — Sidney Shachnow, a child Holocaust survivor from Lithuania who went on to become a two-star general and the commander of U.S. forces in Berlin during the Cold War, has died.

Schachnow died Friday in Southern Pines, North Carolina, where he lived. He was 83.

He and his family survived the Holocaust in Lithuania, where he was imprisoned for three years in the Kovno concentration camp, by keeping their heads low and showing restraint. According to his autobiography, “Hope and Honor,” the same level-headedness guided him through the pains of assimilation as a young refugee living in Salem, Massachusetts, and then through a career in the military.

His stint, including a turn in the Green Berets in Vietnam and as an officer in an undercover unit infiltrating East Germany, ended with his command of U.S. forces in Berlin when the Wall came down in 1989. Among the medals he earned were the Bronze Star, the Silver Star and the Purple Heart.

His description of his childhood in Lithuania is heartbreaking and includes the shattering experience of witnessing a Lithuanian partisan rape his mother while his father hid under the bed. His mother had ordered his father into hiding, knowing that the discovery of adult males could mean a death sentence, but it appears as if Shachnow could never shake off the experience.

“I thought my father would go out and help,” he wrote. “He didn’t. I thought he was a coward. Maybe I was a coward, too.”

Shachnow was also on the board of advisers of the Jewish Institute for National Security Affairs, or JINSA, and appeared at a Jewish War Veterans event.

In a statement, JINSA Chairman David Steinmann said that the organization “was beyond privileged to have Sid as a Senior Advisor for nearly 25 years.”

“Two years ago, when he was honored among our Senior Advisors, Sid asked me to say the following words on his behalf, as his photograph was displayed on the great screen at our annual dinner,” Steinmann recalled. “‘I am a Jew and a Holocaust survivor (the only Survivor to attain the rank of General in the history of the Armed Forces). I was assigned as the Commanding General, Berlin and the Berlin Brigade. Defending the German people, the same people who imprisoned me for three years in a concentration camp. The same people who killed 38 thousand prisoners and left only 2,000 survivors in that camp, one of which I happen to be. I was prepared to fight the Russians, who liberated me. The irony is hard to miss.’”

“He was a very impressive man and his accomplishments were even greater,” Jewish War Veterans National Commander Barry Schneider said in a statement. “His contributions to our American military and to Jewish military history has majorly impacted the lives of Americans and Jewish Americans in ways that we cannot even know.

“Our brother Gen. Shachnow will be sorely missed.”

Schachnow is survived by his wife, Arlene, four daughters and many grandchildren.

The post Sidney Shachnow, Holocaust survivor who went on to command US forces in Berlin, dies at 83 appeared first on Jewish Telegraphic Agency.