Sen. Rand Paul is blocking US military aid to Israel 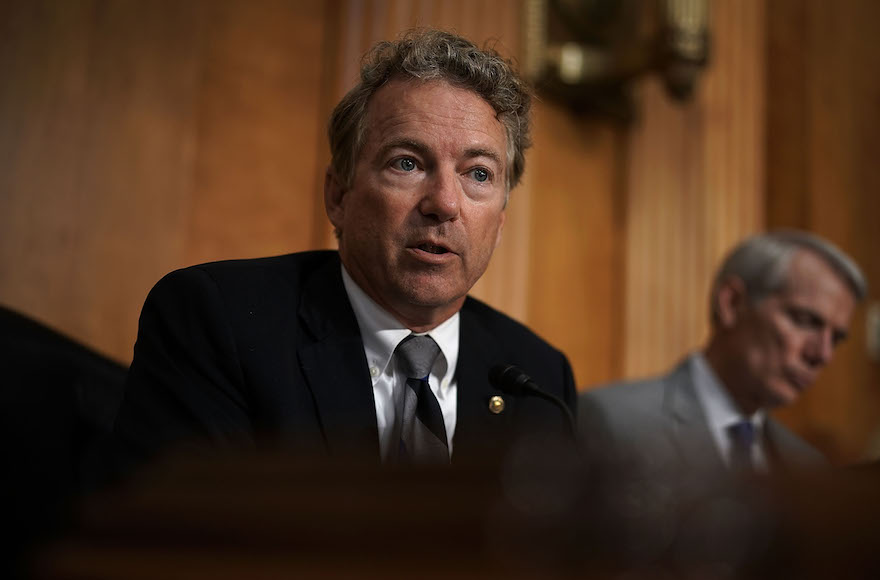 Paul, who has previously called to cut defense assistance to Israel, recently put a hold on the U.S.-Israel Security Assistance Authorization Act of 2018, which codifies into law the $38 billion defense aid package for Israel over 10 years that was negotiated in the final days of the Obama administration.

A hold is a parliamentary procedure that allows senators to prevent a motion from reaching a floor vote.

The Senate passed the act in early August; the House of Representatives followed suit the following month. Now the Senate must pass a final version in line with the bill passed by the House.

The American Israel Public Affairs Committee, or AIPAC, has bought advertisements on Facebook identifying Paul as the main force blocking the act, the Washington Free Beacon reported, citing what it called sources close to the effort.

Meanwhile, Christians United for Israel, or CUFI, sent out an Action Alert email blast on Monday to its supporters calling on them to flood Paul’s office with calls and letters encouraging him to support the legislation. CUFI also invested heavily in ads in Kentucky to target the senator’s constituents directly on the issue, the Free Beacon reported.

Paul’s office did not immediately return a request for comment.

Paul, a presidential candidate in 2016, alienated pro-Israel Republicans almost as soon as he became a senator in 2011, when he embraced his congressman father’s longtime call to cut defense assistance to Israel. The younger Paul later backtracked, saying he regarded Israel as a close ally, and would cut assistance only once it was clear the country was self-sufficient in its defense needs.

The hold comes as Israel faces major immediate threats from Hamas in Gaza, Hezbollah in Lebanon and Syria, and Iran.

The $38 billion deal negotiated in 2016 is the most generous ever to Israel. The act also expands a stockpile of weapons that the United States keeps in Israel, which may access the stockpile in wartime. It also enhances Israel’s qualitative military edge and urges space research cooperation between Israel and the United States.