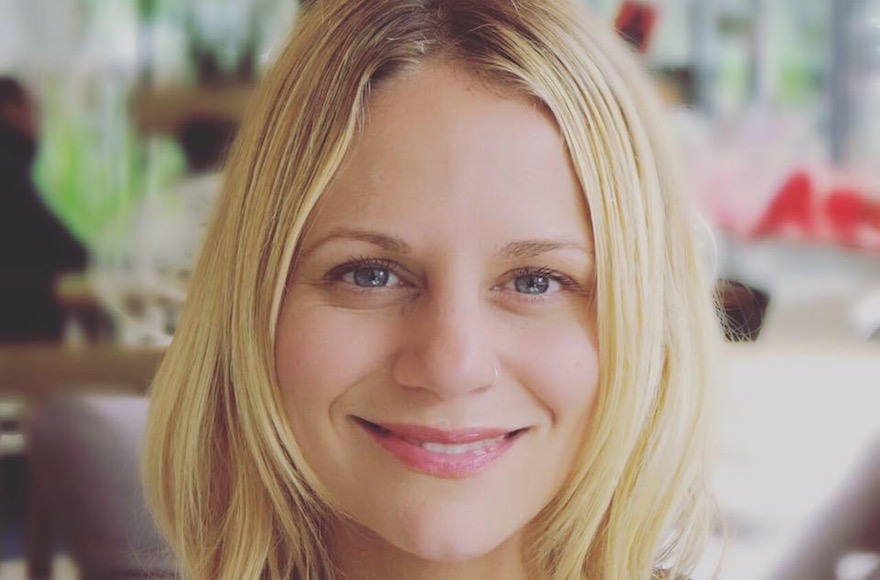 Sarah Tuttle-Singer has cultivated a following of enthusiastic supporters and rabid detractors with her opinions on Israel. (Courtesy of Tuttle-Singer)

JERUSALEM (JTA) — “People don’t know me,” Sarah Tuttle-Singer jokes while sitting curled up on a couch and sipping a cappuccino in the lobby of this city’s famed King David Hotel.

The controversial author and blogger laughs before continuing, a smile playing across her face.

“Let them get to know me, then I’ll give them plenty of reasons to hate me,” she says.

As a writer and social media presence, Tuttle-Singer, 37, can be a divisive figure, with both enthusiastic supporters and rabid detractors taking to the internet to debate her work and politics. A prolific blogger who recently published her first book, a personal narrative about living in Jerusalem’s Old City, she tends toward the left of the political spectrum and was recently was the target of an online campaign calling for the end of her “subversion against the state of Israel.”

A recent petition posted on Change.org called for a boycott of The Times of Israel, the news site where she works as new media editor.

A competing petition, meanwhile, called her “a voice of reason, moderation, and empathy” who “beautifully celebrates peace, justice, and progress within Israeli politics and culture while rightly criticizing racism, violence (on both sides) and the Occupation of the Palestinian people.”

While upset about the level of  public discourse, Tuttle-Singer has developed a thick hide. Asked about her reaction to the petition, she replies that she felt “abject humiliation that they [used] such a terrible photo.”

“I mean, God, what kind of animal does that?” she asks, chuckling. “Monsters! I mean, if you’re going to try and get me fired and shut me down, at least pick a picture where I look hot. Come on!”

In her writing, much of which is found on The Times of Israel site and her personal Facebook page (she has more than 19,000 followers), Tuttle-Singer has dealt with a host of hot-button topics, from questioning whether “Hatikvah” is a racist song (she concluded it is not) to sexual harassment to how she got a tattoo from an Egyptian Palestinian Christian.

Growing up in Los Angeles in the 1980s and ’90s, she recalls not being particularly interested in Israel — a viewpoint that changed after her mother put her on a Young Judaea trip here at age 16. She went on to become obsessed with the Jewish state, taking multiple trips and, when back in the States, “stalking falafel joints looking for Israelis to talk to.”

She eventually married one of them, had two children and taught preschool in Los Angeles. Her husband, however, was getting homesick for his native land and asked her to make aliyah. Despite her love of Israel, Tuttle-Singer was reluctant to leave her comfortable life in America, but eventually the couple moved to his childhood kibbutz.

Tuttle-Singer, who had studied conflict studies and anthropology at the University of California, Berkeley, suddenly found herself a stay-at-home mom in an isolated agricultural collective.

“I was home with the kids all the time and watching the paint dry on the walls. I went out of my mind. I was lonely,” she recalls. “I didn’t have anybody except for my ex-husband and his mother and my children.”

Within half a year her marriage had dissolved and she was faced with a choice.

“Do I hightail it back to L.A., fight to take the kids back with me, and go back to my family and Barnes & Noble and Coffee Bean, or do I suck it up and make it work?” she asks. “I chose option B.”

She began blogging as an outlet. Through her writing, Tuttle-Singer discovered that she wasn’t alone and that “there was a robust Anglo community here” — that is, English-speaking. A personal story brought her to the attention of The Times of Israel: She described how her childhood rabbi accidentally discovered a marital aid in a drawer in her house during a party celebrating the birth of her daughter.

The post “went sort of viral,” she says, “and they realized that they were looking for a social media person, and [if] this woman is out there enough to publish something like this, then we want her working for us.”

Her writing ranges from deeply personal to caustically political, sometimes in the same post or essay. Here Tuttle-Singer is describing what it’s like to raise her son and daughter during a terror wave: “I think about all the mothers and fathers out there whose kids breeze out the door each day, maybe blowing a kiss over their shoulder, but probably not. ‘Yalla, bye see you later.’ Like it’s a given. And usually it is a given. Until it’s taken away.”

And here she posts on the upcoming visit to Israel by the Filipino strongman Rodrigo Duterte: “We interrogate liberal Jews at the airport and the Sinai border, and welcome the guy who admires Hitler with open arms?!? Israel, WTF?”

Her writing has led to a host of confrontations. Some in turn have led to lasting friendships.

“People in general are a lot nastier online,” she says. “People in person mostly know how to behave in society, are mostly quite pleasant, and that’s why when comments get heated I will sometimes say ‘let’s meet for coffee.’ And [sometimes that is the] first conversation that leads to friendship.”

Much of her writing has focused on the Old City of Jerusalem and its varied cast of characters, including national-religious Jews, Arabs, Christians and Armenians, who make up its diverse and often confrontational social fabric. Initially terrified of the Old City after being stoned at the Damascus Gate during a visit her senior year of high school, Tuttle-Singer eventually returned with a journalist friend and fell back in love with the walled rabbit warren that is the heart of Jerusalem. Tuttle-Singer, shown here in the Old City of Jerusalem, is most recently the author of a book about its religious and cultural mosaic. (Courtesy of Tuttle-Singer)

Eventually she began living there, spending half the week on a moshav and the remaining days living in a series of hostels and temporary rentals across the Old City’s four quarters, an experience that she turned into the well-received “Jerusalem, Drawn and Quartered: One Woman’s Year in the Heart of the Christian, Muslim, Armenian, and Jewish Quarters of Old Jerusalem” (Skyhorse).

“I realized that I don’t want to just visit but I want to live here, and one way to pull that off and to do some really crazy and stupid shit was to do a book,” she says. “That way you could say ‘oh this is for my art, I have to do this because I’m writing a book,’ otherwise you’re that lunatic wandering around at 3 in the morning climbing the ramparts.”

Tuttle-Singer remembers showering in a hostel when a man covered in Russian prison tattoos accidentally walked in on her. He began speaking and she pulled out her phone to use Google Translate. It turned out that he was asking her out to Midnight Mass.

Not every hostel is friendly. One Old City establishment, run by a follower of the late militant rabbi Meir Kahane, recently published a list of purported “haters of Israel” who have been banned “because of crimes committed against the Jewish people.” Among those listed were “all Times of Israel staff (especially STS).”

Tuttle-Singer and other journalists mostly found the list amusing, with those not banned complaining that they didn’t make the cut.

She believes that she is being singled out for a variety of reasons, including because she is so open with personal issues and controversial topics.

“But I also think that we can’t overlook the fact that I am a woman,” she adds. “I dress how I want to dress, I speak how I want to speak, I act how I want to act and even post-MeToo we still have a long way to go.”

At the end of the day, Tuttle-Singer says she is an optimist who loves to write and wants to bring people together.

“I worry about this country,” she says. “Israel is [our] larger family and there is love and concern, and even as things become increasingly more uncomfortable in many ways with the nation-state law and the attacks on the media and the quote-unquote left, I’m not going to leave.

“I believe in this country and its robust democracy, and I’m staying and I’m going to fight for what I believe in.”

The post Sarah Tuttle-Singer pulls in readers — and trolls — with her warts-and-all portrayal of Israel appeared first on Jewish Telegraphic Agency.