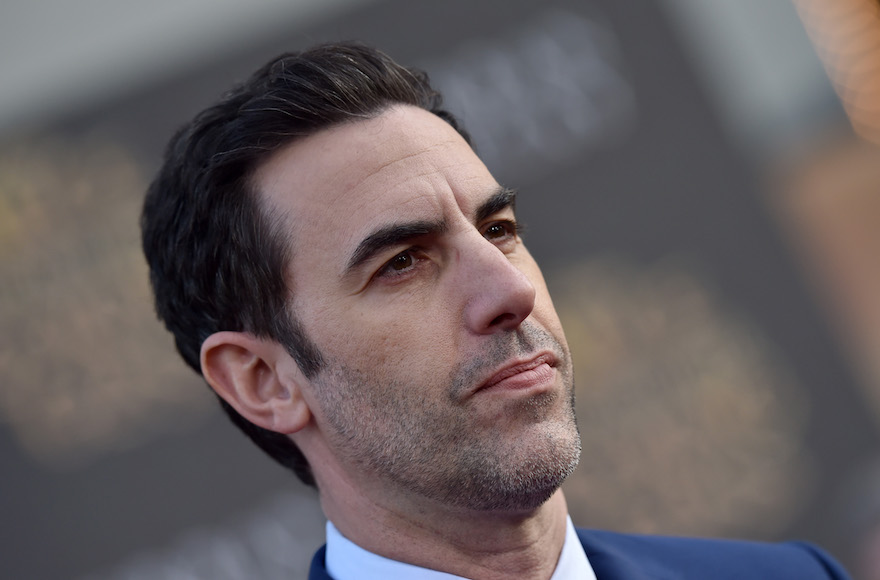 Sacha Baron Cohen at the El Capitan Theatre in Hollywood, Calif., May 23, 2016. (Axelle/Bauer-Griffin/FilmMagic)

WASHINGTON (JTA) — Sacha Baron Cohen is back, and he is taking aim at a strain of “pro-Israel” thought that has both delighted and unsettled many American Jews: the unconditional love engendered by the country among deeply conservative Americans.

In “Who is America?,” a show that made its debut Sunday night on Showtime, the British Jewish comic returns with the shtick that made him famous — disguising himself in order to prank the famous and not-so-famous.

The gun rights activists, Philip Van Cleave and Larry Pratt, endorse Morad’s “Kinderguardian” program. So do Trent Lott, the former senator from Mississippi; Reps. Dana Rohrabacher, R-Calif., and Joe Wilson, R-S.C.; and a former Rep., Joe Walsh, R-Ill. (Van Cleave stars in a Barney-like instructional video in which he sings a variant of “Heads, Shoulders, Knees and Toes”: “Aim at the head, shoulders, not the toes, not the toes.”)

Rep. Matt Gaetz, R-Fla., acquits himself well: “Typically, members of Congress don’t just hear a story about a program and indicate whether they support it or not,” he tells Morad.

The entire segment appears to have taken advantage of the targets’ pro-Israel sympathies. Walsh told CNN that Cohen had fooled him into participating by telling him that he was “getting an award from some Israeli TV station because I’m a great supporter of Israel.” For a segment that did not air Sunday night, Roy Moore — whose bid for a Senate seat in Alabama fell apart over old allegations of soliciting minors — also said he had fallen for the Israel-award thing.

Walsh said he had been asked to read a story off a teleprompter about a 4-year-old Israeli who grabbed a gun and subdued a terrorist. Walsh said he thought, “Well, this is kind of crazy, but it is Israel and Israel is strong on defense.”

Cohen apparently intended the segment to be an expose of zealous support for gun ownership, although it could be seen as an example of blind support of everything Israel. In real life, gun rights activists have frequently — and often erroneously — cited Israel as an example of a country with few restrictions on gun rights. In fact, restrictions on gun use and ownership in Israel are far-reaching.

David Frum, a Jewish conservative who writes for the Atlantic magazine, tweeted that Cohen “repeatedly takes advantage of people’s affection and respect for the State of Israel to deceive and humiliate them.”

Allison Kaplan Sommer, an Israeli American who writes for the liberal Israeli daily Haaretz, was critical, too.

“Yes, your satire was outrageously on point and Col. Erran Morad was spot on,” she wrote on Facebook, addressing Cohen. “Still — bad enough that Israel gets demonized for the things it actually does — you have to go and make horrifying fake stuff up? Satire or not, I’m afraid the American public is going to be left with the impression that we are, in fact, gun fans when the truth is our gun control is a million times stricter than in the US.”

Another Israeli writer, Noga Tarnapolsky, thought Cohen’s blows landed on two worthy targets: “Sacha Baron Cohen deployed the weirdo fetishization of Israel & Benjamin Netanyahu personally among right-wingnuts in an utterly clarifying way,” she tweeted. “How Bibi became a cult-like object for the gun rights people is beyond me.”

Cohen, for sure, is a shock comic. But he is also a satirist, and one intimately acquainted with Israel: He speaks Hebrew, grew up in a Zionist youth group and spent summers there. His mother was born in Israel and he has family there.

It appears on early evidence that Cohen’s target is not “pro-Israel” per se, or even “right-wing pro-Israel,” but a strain of Israel support that imagines Israel as its own distorted reflection — and not what it is.