WASHINGTON (JTA) – Ruth Bader Ginsburg, the first Jewish woman to serve on the Supreme Court and a tireless advocate for gender equality, has died at 87.

A fierce jurist known for her outsized presence and outspokenness, Ginsburg died from “complications of metastatic pancreas cancer,” the Supreme Court announced Friday night. She had survived multiple bouts of different cancers over the course of two decades, vowing that she was healthy enough to continue her work and at times returning to the bench shortly after hospital stays.

Ginsburg’s death comes on the eve of Rosh Hashanah, six weeks before the presidential election and at a time of intense political polarization.

Four years ago, the Republican-held Senate refused to consider President Barack Obama’s nomination of Merrick Garland to the Supreme Court, and Senate Majority Leader Mitch McConnell has said he will attempt to fill any spots that open up on the court while President Donald Trump is in office. He repeated that pledge on Friday night following news of Ginsburg’s death.

“The American people should have a voice in the selection of their next Supreme Court justice,” said Schumer, who is Jewish. “Therefore, this vacancy should not be filled until we have a new president.”

McConnell used precisely the same words to justify delaying a Supreme Court nomination in 2016 following the death of Antonin Scalia, a conservative justice, much earlier in the election year than Ginsburg’s passing.

Ginsburg reportedly told her granddaughter Clara Spera in her final days: “My most fervent wish is that I will not be replaced until a new president is installed.”

In her 27 years on the court, Ginsburg emerged not only as the putative leader of the court’s liberal wing but as a pop cultural phenomenon and feminist icon, earning as an octogenarian the moniker Notorious R.B.G. — a play off the deceased rapper Notorious B.I.G.

She won liberal acclaim by penning blistering dissents in high-profile cases concerning birth control, voter ID laws and affirmative action even as she maintained a legendary friendship with Scalia, the staunchly conservative firebrand who died in 2016.

Ginsburg was frank as well about the importance of Jewish tradition in influencing her life and career, hanging the Hebrew injunction to pursue justice on the walls of her chambers.

“I am a judge, born, raised and proud of being a Jew,” she said in an address to the American Jewish Committee following her 1993 appointment to the court. “The demand for justice runs through the entirety of Jewish history and Jewish tradition.”

Ginsburg was nominated to the nation’s highest bench by President Bill Clinton following the retirement of Byron White. In her Rose Garden nominating ceremony, Clinton lauded Ginsburg for standing with the “the outsider in society … telling them that they have a place in our legal system, by giving them a sense that the Constitution and the laws protect all the American people, not simply the powerful.”

Ginsburg attributed that outsider perspective to her Jewish roots, pointing often to her heritage as a building block of her perspective on the bench.

“Laws as protectors of the oppressed, the poor, the loner, is evident in the work of my Jewish predecessors on the Supreme Court,” she wrote in an essay for the AJC. “The Biblical command: ‘Justice, justice shalt thou pursue’ is a strand that ties them together.”

The Brooklyn native was the daughter of Nathan Bader, a Russian immigrant and furrier, and the former Celia Amster. She often noted that her mother was “barely second generation,” having been born a scant four months after her parents’ arrival from Hungary. Ginsburg was keenly aware of the Jewish immigrant experience and her own good fortune to be born on these shores.

The Holocaust colored her perspective of the world and the law. 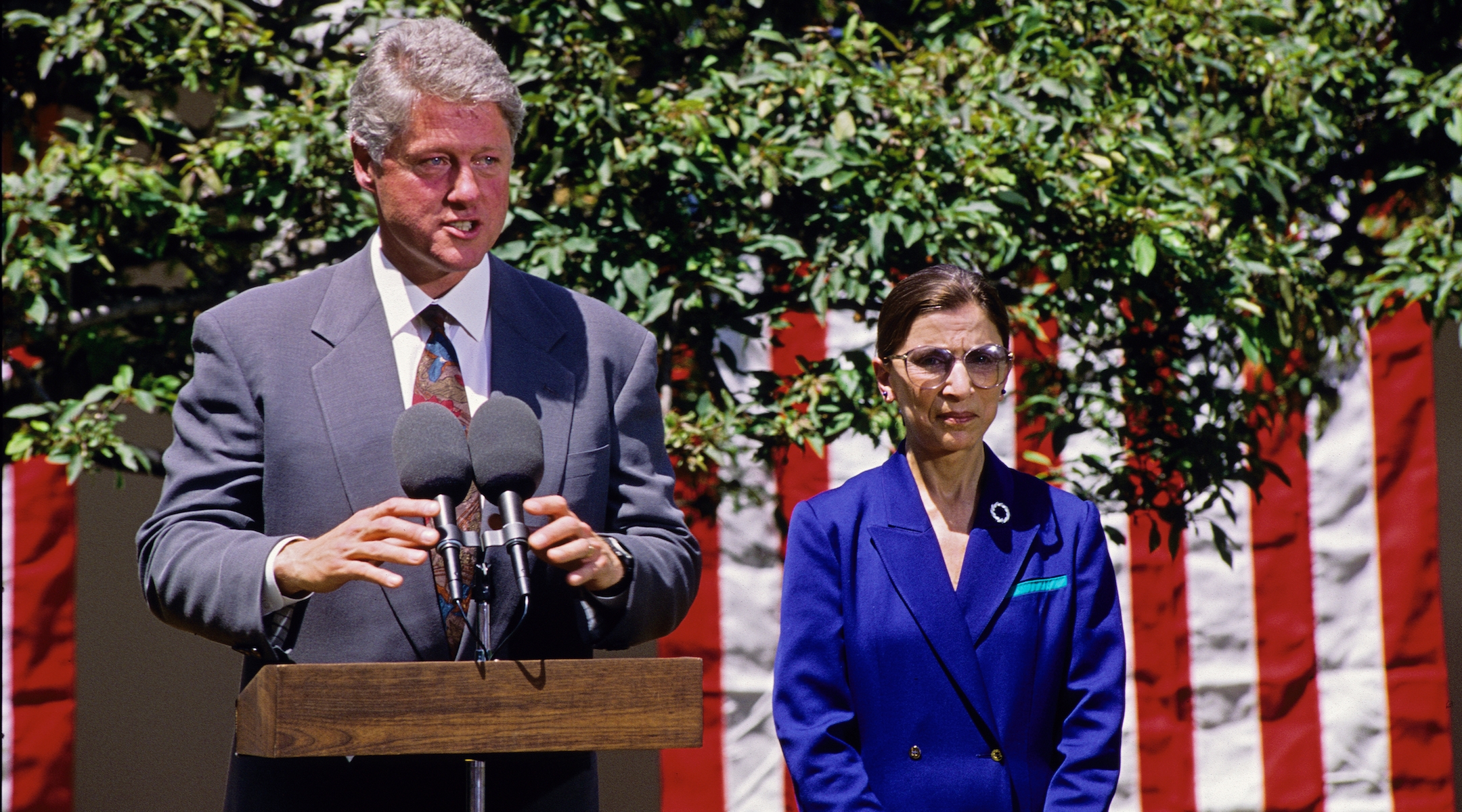 “Our nation learned from Hitler’s racism and, in time, embarked on a mission to end law-sanctioned discrimination in our own country,” Ginsburg said at a 2004 Yom Hashoah commemoration at the U.S. Holocaust Memorial Museum in Washington, D.C. “In the aftermath of World War II, in the civil rights movement of the 1950s and 1960s, in the burgeoning women’s rights movement of the 1970s, ‘We the People’ expanded to include all of humankind, to embrace all the people of this great nation. Our motto, E Pluribus Unum — of many one — signals our appreciation that we are the richer for the religious, ethnic and racial diversity of our citizens.”

But while Ginsburg was fortunate to be born in the United States, even brilliant women in the 1950s had no easy path. Following her graduation from Cornell University, where she met her husband, Martin Ginsburg, Ginsburg lived for two years in Oklahoma and experienced the setbacks that women faced at the time: She was demoted from her job at the Social Security Administration after her supervisor discovered she was three months pregnant.

Two years later, Ginsburg was one of only nine women in her Harvard Law School class with about 500 men. She had a 14-month old daughter and had to battle the endless skepticism of her professors and colleagues. A well-known story has it that at a meeting of her female classmates with the law school dean, the women were asked why they deserved a spot taken from men.

When Martin, a Harvard Law graduate, took a job at a New York law firm, Ginsburg transferred to Columbia. At both schools she served on the Law Review, and she finished Columbia tied for first in her class. Yet not a single law firm would hire her.

Ginsburg eventually clerked for Judge Edward Palmieri and went on to teach law at Rutgers University. She created the Women’s Rights Project at the American Civil Liberties Union and was the first tenured woman to teach law at Columbia. Ginsburg quickly built a reputation for establishing gender parity before the law, arguing six major sex-discrimination cases before the U.S. Supreme Court, winning all but one.

In one of those winning cases, Weinburger v. Wiesenfeld in 1975, Ginsburg represented a widower left with a child in his care when his wife died in childbirth. The father requested the childcare benefits that a woman would receive if her husband died but which were then denied to men.

“From the outset, she insisted that gender discrimination was not only an issue of women’s rights, demonstrating how using gender as a basis for different treatment was also harmful to men,” Judith Rosenbaum of the Jewish Women’s Archive said.

In 1980, President Jimmy Carter named Ginsburg to the U.S. Court of Appeals for the District of Columbia. Her nomination to the Supreme Court was approved overwhelmingly by the Senate on Aug. 3, 1993. She took her judicial oath of office a week later, becoming only the second woman to serve on the court after Sandra Day O’Connor.

As a Supreme Court jurist, Ginsburg continued her fight for gender equality. In 1996, she wrote the majority opinion in United States v. Virginia, which deemed the Virginia Military Institute’s policy of not admitting women unconstitutional. She also authored the dissent in Ledbetter v. Goodyear Tire, a pay discrimination case that would lead to the 2009 Lily Ledbetter Fair Pay Act. Though a critic of the landmark Roe v. Wade case that decriminalized abortion nationally, Ginsburg consistently argued for protecting the right to abortion.

Late in her career, she emerged as a cultural icon. In 2013, law student Shana Knizhik started a Tumblr blog collecting all manner of Ginsburg fan art, from celebratory tattoos to coffee mugs, T-shirts and onesies. The blog spawned a 2015 book with the Notorious R.B.G. tag co-authored with Irin Carmon.

“Justice Ginsburg more than earned her Notorious crown and the admiration of millions of people with her fearless advocacy for marginalized people and her stubborn belief that women are people,” Carmon said. “People felt moved to make fan art and tattoo her face on their bodies because she spoke for them when it mattered.”

Ginsburg is survived by two children — Jane, a law professor at Columbia, and James, a music producer — and four grandchildren. Martin Ginsburg died in 2010.