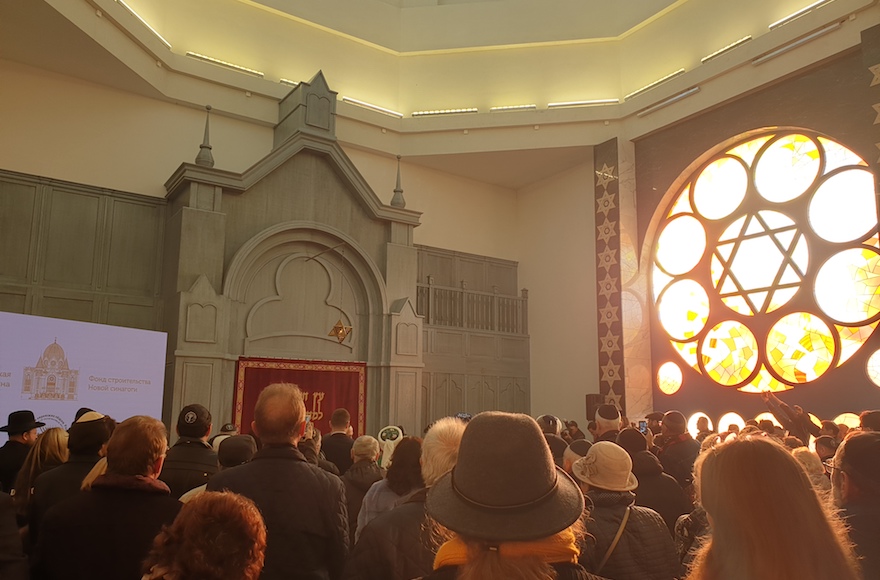 KALININGRAD, Russia (JTA) — Walking to school and back, Michael Wieck twice a day would pass by one of Europe’s largest and most spectacular Jewish places of worship: Koenigsberg’s New Synagogue.

The mammoth shul was built in 1896 in the Aesopian style in the bustling port city that is now called Kaliningrad. Its two enormous spires were dwarfed by the building’s even larger dome.

“The synagogue was never empty,” Wieck, a 90-year-old Holocaust survivor, told JTA in a telephone interview from his home in Berlin. “It was a very diverse Jewish community. We had a good life.”

Indeed, the New Synagogue was a symbol of that good life and of how integrated and safe Jews felt in Koenigsberg, which the Russians took away from Germany in 1945.

This is why the synagogue’s destruction and torching by the Nazis in the Kristallnacht pogroms that began on Nov. 9, 1938 was particularly shocking to Wieck and the thousands of Jews who lived there.

“We saw the hulking ruin of our historic old synagogue each day, now a silent, accusatory memorial, a memorial to suffering,” Wieck wrote in a 2003 biography that he penned about his childhood in Koenigsberg.

“It’s the only synagogue in Russia that was destroyed during Kristallnacht,” Rabbi Alexander Boroda, president of the Chabad-affiliated Federation of Jewish Communities of Russia, said of the New Synagogue of Koenigsberg. “It’s very symbolic that we’re rebuilding it almost exactly as it was, not only restoring its glory but expanding on it.”

On Thursday, thousands of locals gathered outside the synagogue and viewed on a giant screen live footage of Rabbi Berel Lazar, one of Russia’s two chief rabbis, blowing the shofar inside for about 1,000 guests at the rededication ceremony. Diplomats and government officials joined congregants in the sanctuary. 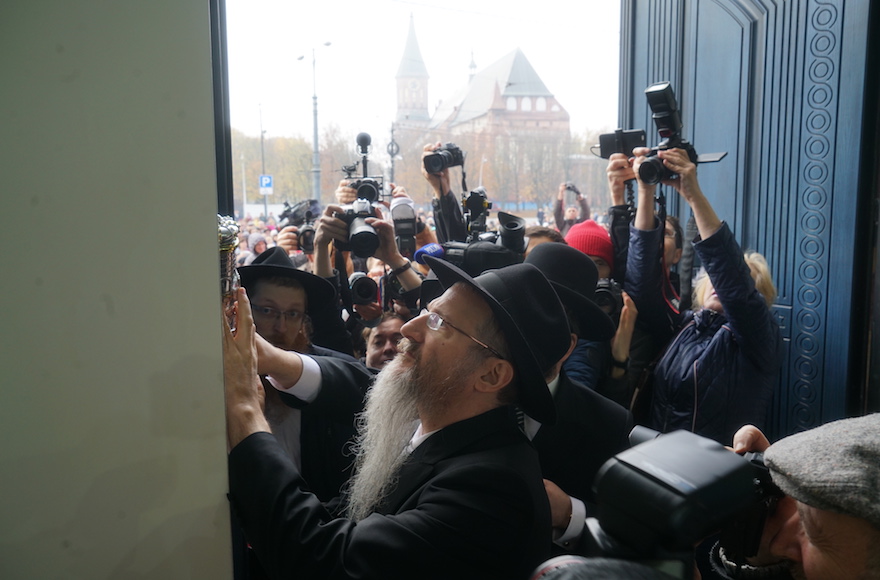 Rabbi Berel Lazar affixes a mezuzah to the front door of the New Synagogue in Kaliningrad, Nov. 8, 2018. (Cnaan Liphshiz)

There used to be three synagogues in Koenigsberg, a former capital of the now defunct German state of East Prussia. Sandwiched between Poland and Lithuania, the Prussian enclave had a German-speaking population and Jewish community that was very different from the Yiddish-speaking ones living around it in impoverished Jewish towns, or shtetls.

Like their counterparts in Berlin and Munich, Koenigsberg’s Jews were highly intellectual, largely liberal and heavily assimilated.

They felt so much at home that the eruption of violence on Kristallnacht – five years after the Nazis rose to power – “took us completely by surprise,” Wieck said.

Kristallnacht was an orchestrated campaign of terror that the Nazis unleashed following the assassination of a German diplomat, Ernst vom Rath, in Paris by a young Jew, Herschel Grynszpan.

Nearly 100 people died and countless thousands were wounded in reprisals waged in Austria and Germany during the pogroms. Many scholars consider it a watershed moment in the history of the Holocaust because it was the first large-scale wave of physical violence directed by the Nazis against Jews.

Wieck recalls that on the day after the first of the Kristallnacht pogroms, his parents were “upset and worried.”

“They wouldn’t allow me to go to school that day and told me that the synagogue — and that meant our school, too — had been burned down,” he said.

A few years later he noted that much of Koenigsberg had been turned into a smoldering ashes as well because of Soviet and Allied bombings.

“If you wanted to, you could see this as God’s judgment,” Wieck said. “I couldn’t. What happened punished us and many others in the same way, and often more harshly than those who were really guilty.”

Wieck said he has “no words to describe” his feeling about the re-inauguration.

“There’s too many emotions, too many nuances,” he said, his tone emotional.

Nehama Drober, another survivor in her 90s who witnessed Kristallnacht in Koenigsberg, came especially for the re-inauguration from Israel, where she has lived since 1991.

“It feels like a closing of a circle, a measure of compensation,” said Drober, a great-grandmother of four who lost both her parents in the Holocaust. “Besides, this city should have a synagogue. Jews should have a place to pray, here of all places.”

The restoration cost millions of dollars, largely provided by a local philanthropist, Vladimir (Dan) Katsman, who heads a food conglomerate. It required a massive engineering and restoration operation that included the casting, transportation and complex installation of a 23-ton metal dome earlier this year.

The building is still in the last stages of construction, its wall featuring exposed wires and pipes and its backyard essentially a construction site. Even the impressive facade has missing tiles. One half-built tile roof above the entrance tells the story of elastic deadlines and a building opened hastily to make the historic anniversary.

Still, on the eve of the inauguration, the illuminated stained-glass of the octagonal base for the synagogue’s enormous dome already dominated the waterfront of the Pregolya River promenade, with its quaint wooden bridges over water that in autumn is covered with fallen yellow and orange leaves.

But the new building is more than a monument, Boroda said. One of the few Soviet cities where Jews were admitted without problem into university, Kaliningrad became a Jewish hub with more than 3,000 Jews living there today — approximately the same number as in Lithuania and Poland combined, Boroda said. Services and activities are being held now at a temporary building, making the New Synagogue the first such institution to open in the city in decades.

And whereas the original synagogue was merely a house of worship with a classroom, the new one is both a synagogue and a Jewish community center with activity rooms, computers and an auditorium that can hold hundreds.

“It’s more than restoration, it’s revival,” Boroda said, naming the word that many Chabad emissaries use to describe the growth in the infrastructure of Russian Jewry under Vladimir Putin, the nation’s authoritarian president.

Putin is accused by his critics of enlisting homophobic and xenophobic legislation and rhetoric for his populist agenda of restoring Russia to the world stage as a superpower, with references to its czarist and even communist past. He undid a decade’s worth of democratization, turning Russia into what many say is once more a police state.

Through it all, however, Putin has remained committed to curbing anti-Semitism.

Under him, the state gave millions of dollars in funding to Jewish institutions. And regional leaders returned – mostly to Chabad-run outfits — dozens of assets seized from Jewish ownership under communism, including the land for the Koenigsberg synagogue. 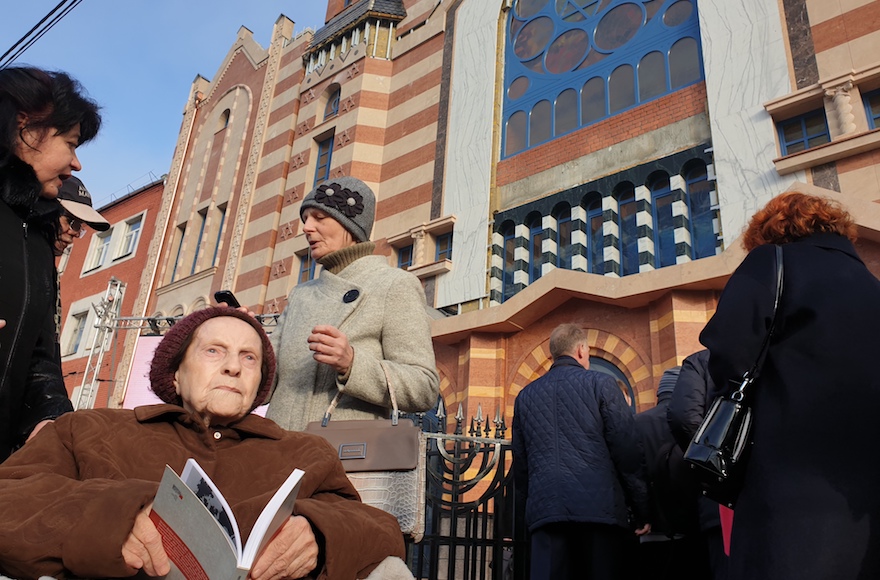 Lazar, the Chabad-affiliated chief rabbi, called this “a golden era” for Russian Jews, who “have never had a friendlier leadership” in Russia.

Putin’s example and the judiciary’s aggressive handling of anti-Semitic hate crimes have made it a rare occurrence in Russia. At a time when the United Kingdom, France and Germany are registering hundreds of anti-Semitic incidents annually, Russia has seen a fraction of that sum.

A report from last month by a human rights group critical of the Kremlin, the SOVA Center, suggested that the number of anti-Semitic hate crimes documented in Russia in the first half of 2018 was fewer than 10.

But surveys suggest that this in no part is because of any major shift in popular perceptions about Jews in Russia, a country where they had been persecuted for centuries.

When the Pew Center asked thousands of Russian adults if they would accept a Jew into their family, only 40 percent said yes. The figure in Western Europe ranged from 96 percent in the Netherlands to 57 percent in Italy.

Crediting a dictatorial Putin with the paucity of attacks in Russia is cause for concern to many Russian Jews, who wonder about their future in a post-Putin Russia.

And a growing number of Russian Jews are leaving — especially from the large cities of Moscow and St. Petersburg, where most of Russia’s 250,000 Jews live.

Last year, Russian immigration to Israel grew to 7,224 newcomers, the highest figure on record in over a decade, making Russia the largest single provider of immigrants to Israel under its Law of Return for Jews and their relatives that year, or aliyah, that year.

Part of the reason for the surge is the economic crisis hitting Russia as a result of dropping oil prices and sanctions over its territorial conflict with Ukraine.

But that’s only part of the story, former refusenik Natan Sharansky, the former chairman of the Jewish Agency for Israel, told JTA last year.

Amid the erosion of democracy in Russia, he said, Jewish “businessmen, people from the intelligentsia, they are afraid to find themselves yet again closed off from the free world.”