Russia blames Israel after its military aircraft shot down over Syria 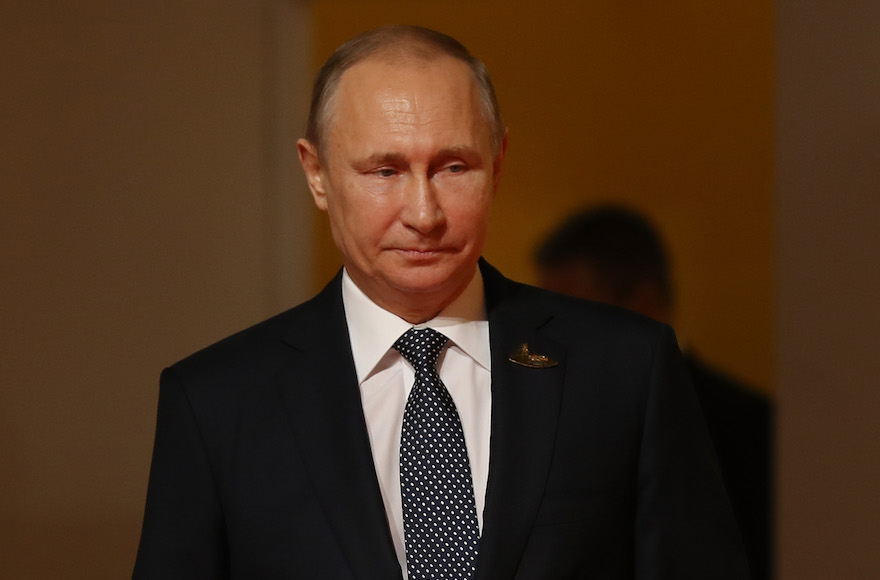 JERUSALEM (JTA) — Russia is blaming Israel after one of its military aircraft was shot down over Syria.

The plane disappeared Monday from radar following an alleged Israeli airstrike on a Syrian air base near Latakia.

Israel used the Russian reconnaissance aircraft as cover for its mission, Russia’s Ministry of Defense charged in a statement on Tuesday.

“A Russian Ilyushin Il-20 plane was downed by Syrian Air Defense missile after Israeli F-16 pilots used it as cover, thus setting it up to be targeted by [anti-aircraft] defense. Such actions can only be classified as a deliberate provocation,” the statement said.

Israel has neither confirmed nor denied that it launched such an attack. Israel rarely comments on such reports.

Russia’s Defense Minister Sergei Shoigo on Tuesday told his Israeli counterpart Avigdor Liberman that his government holds Israel responsible for the downing of the plane.

Fifteen Russian servicemen were killed in the crash.

Russia says that Israel gave it one minute of warning before it launched its airstrikes on the Syrian targets in Latakia, which was not enough time to get its planes out of the area.

Russia’s Defense Ministry said it could respond to what it called Israel’s “provocative actions.”

“We regard the provocative actions of Israel as hostile. As a result of the irresponsible actions of the Israeli military, 15 Russian servicemen were killed. This is absolutely not in keeping with the spirit of the Russian-Israeli partnership. We reserve the right to adequate response,” the ministry’s statement said.

Syrian state media said its air defense system was activated at about 10 p.m.  and that the projectiles came from the sea.

CNN cited what it called a U.S. official with knowledge of the incident as saying that the Syrians were trying to stop a barrage of Israeli missiles when the Russian aircraft was hit. A second official confirmed that Israel was responsible for the missile strikes on Syria, CNN reported.

Syrian media reported  earlier in the week that Israel targeted the Damascus International airport with missiles on Saturday night.

The post Russia blames Israel after its military aircraft shot down over Syria appeared first on Jewish Telegraphic Agency.