Ronald Lauder, in second public rebuke, asks if Israel ‘is losing its way’ 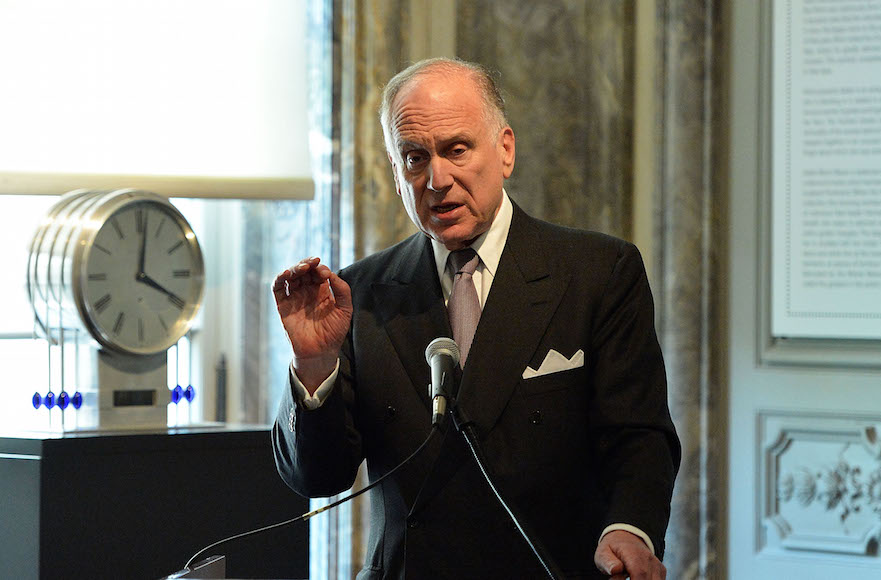 JERUSALEM (JTA) — The president of the World Jewish Congress issued another rare rebuke to Israel on Tuesday, panning the recently passed nation-state law, calling out the country’s Orthodox monopoly and accusing the Netanyahu administration of damaging “the sense of equality and belonging of Israel’s Druze, Christian and Muslim citizens.”

Writing in The New York Times, Ronald Lauder, a usually vociferous defender of Israel, listed a number of recent incidents — including the arrest of a Conservative rabbi for conducting weddings and the exclusion of same-sex couples from a newly passed surrogacy law — that he believes “are creating the impression that the democratic and egalitarian dimensions of the Jewish democratic state are being tested.”

“Israel is a miracle. The Jews of the diaspora look up to Israel, admire its astonishing achievements and view it as their second home. However, today some wonder if the nation they cherish is losing its way,” he wrote.

Asserting that Zionism traditionally merged Jewish nationalism with universal humanism and the values of the enlightenment, he said that the Israeli government “appears to be tarnishing the sacred value of equality,” causing many supporters to “feel it is turning its back on Jewish heritage, the Zionist ethos and the Israeli spirit.”

“The issue at hand is first and foremost a moral one, but the new nation-state legislation may also have severe national and international repercussions. In Israel, it will heighten the sense of polarization and discord,” Lauder wrote. “Abroad, Israel may find itself associated with a broken values system and questionable friends. As a result, future leaders of the West may become hostile or indifferent to the Jewish state.”

Lauder also critiqued the Israelis for “unintentionally undermin[ing] the covenant between Judaism and enlightenment” and by doing so “crush[ing] the core of contemporary Jewish existence.”

The op-ed is his second this year openly critical of Israel. In another New York Times piece published in March, Lauder broke with Prime Minister Benjamin Netanyahu in pressing hard for a two-state solution — a significant stance because the cosmetics billionaire has the ear of President Donald Trump, who has spoken repeatedly about unveiling a Middle East peace proposal.

A number of Jewish organizations in the Diaspora have been critical of the nation-state law and other indicators of what they see as a drift away from democratic values. The Jewish Federations of North America and The International Fellowship of Christians and Jews, two organizations that provide major funding to projects in Israel, both criticized the nation-state law in recent weeks.

Netanyahu’s aides have defended the nation-state law, saying that while Israel already had laws to protect individual freedoms and minorities, there were none specifically defining the Jewish identity and purpose of the state.