Romanian Jews bid ‘goodbye to an era’ with death of their longtime leader, Aurel Vainer, at 89

BUCHAREST (JTA) — Aurel Vainer, a longtime leader of Romania’s Jewish community who, as the only Jewish member of parliament, befriended colleagues of all political stripes, has died.

Dozens of Romanian Jews on Tuesday defied fear of the COVID-19 wave ravaging their Eastern European country to pay their last homage to Vainer, who died Sunday at age 89. The longtime head of the Federation of Jewish Communities in Romania was buried with military honors and top politicians in attendance at the Filantropia Jewish cemetery in Bucharest.

Besides leading Romania’s Jewry, Vainer also served three terms in Romania’s parliament, where he established warm relationships with across political parties. He was friendly with Corneliu Vadim Tudor, a vociferous antisemite and court poet of communist dictator Nicolae Ceausescu, who became leader of Romania’s nationalist right.

“He got to know antisemitic persecution and the hatred of those around him,” David Saranga, Israel’s ambassador to Romania, said at the funeral. “However, despite all the suffering, he chose to live a life in the spirit of love.”

The seventh child of a family of modest but prosperous merchants, Vainer was born in the shtetl of Stefanesti, northeastern Romania, in 1932, when the number of Jews living within the country’s borders neared 800,000. He survived the horrors of the 20th century and experienced firsthand the dramatic demographic decline of a community whose numbers are south of 10,000 today.

“With his death, we say goodbye to an era,” Gilbert Saim, a prominent member of the community who helps lead services at the Choral Temple in Bucharest, told the Jewish Telegraphic Agency. 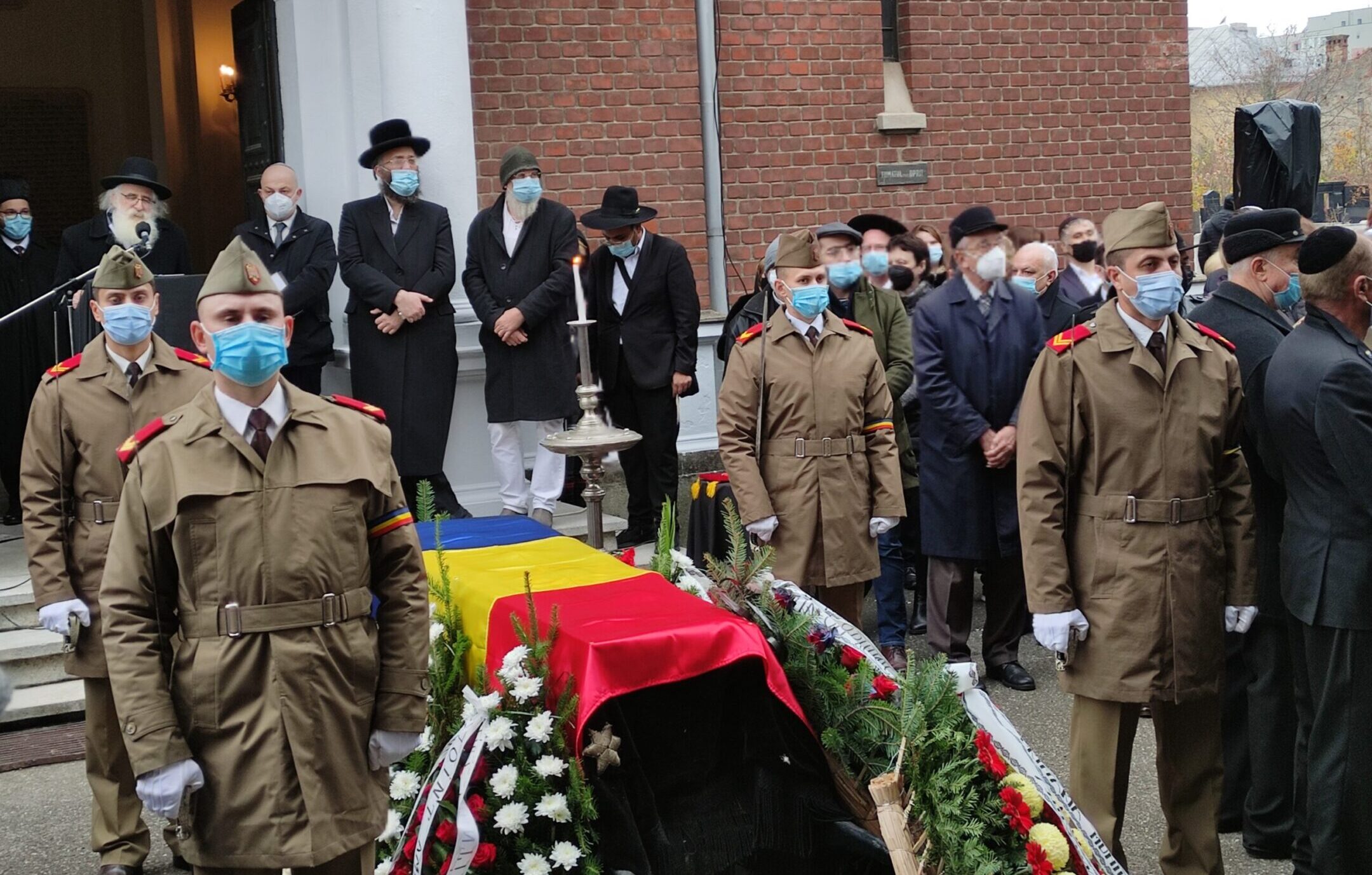 Vainer’s introduction to state antisemitism came when he was 9, when he witnessed a visit by a commando of the viciously antisemitic Iron Guard, which was then part of the government and had come to inform his father of the immediate confiscation of all his property, in application of the so-called Romanization laws.

“He broke down,” Vainer recalled in an interview a year ago. His mother took over the reins of the household and the children started working to help with money. Despite all the hardships, she offered them all a good education, which later allowed her youngest child to have a successful career as an economist under communism.

At the advent of democracy in 1990, Vainer’s connections and professional experience landed him a job as vice-chairman at the Romanian Chamber of Commerce. In 2004, when he was 73 and ready for retirement, he was elected as the representative of Romanian Jews in Parliament. A year later he was chosen as head of the Federation of Jewish Communities in Romania, a position he held until his retirement last year.

The Jewish community he had been appointed to lead was totally different from the vibrant one he had known as a child. Roughly half of the Jews living in prewar Romania had been murdered by German, Romanian or Hungarian forces. Fleeing new forms of discrimination, repression and state-ordained poverty under communism, the survivors’ overwhelming majority, including Vainer’s siblings, subsequently emigrated to Israel, the U.S. or Western Europe.

“I was the only Zionist in the family, and I’m the only one who’s not made aliyah,” Vainer said in the interview last year. His dream of moving to the homeland of the Jews was frustrated by both politics and chance. As a 12, perhaps 13, years old member of the leftist-Zionist youth movement Dror Habonim, he joined a kibbutz set up in the Romanian Black Sea coast for training before emigration.

“We lived a collective life while also unloading timber from ships at the port,” Vainer said. When a ship bound for Israel finally arrived, a group of anti-Zionist Jews of the Jewish Democratic Committee, a puppet organization of the communist regime, made use of their influence to get on board. Vainer and his enthusiastic comrades remained ashore. Soon after, the communist authorities issued a ban on Jewish emigration which would last several years.

“I accepted my destiny,” he said decades later about his fate.

As head of the Romanian Jews, Vainer was in charge of an aging and ever-shrinking community of hardly 10,000 people, but also of 86 synagogues and over 850 cemeteries, often scattered through remote villages where Jewish life ceased to exist long ago.

“This is to say, very few people and great obligations,” he said in retrospect about the mission he had set on.

Wielding his charisma and diplomacy, Vainer brought on board Jewish international organizations such as the Joint Distribution Committee and appealed to the Romanian state to fund the renovation of several synagogues and cemeteries, many of which were in an advanced state of dilapidation or on the brink of collapse. “There are many examples: the Choral Temple in Bucharest, the synagogues in Oradea and Timisoara,” Vainer said about the most iconic monuments refurbished during his tenure. “They are the best evidence that Romanian Jews had contributed greatly to the country’s heritage.”

He also presided over the partial transformation of synagogue buildings into Jewish cultural centers increasingly catering to non-Jewish Romanians, which has become an imperative to keep infrastructure in use in those parts of the country where Jewish communities disappeared.

A champion of dialogue and forgiveness, Vainer was an inveterate optimist who always chose to see the bright side of people and things. In 2020, during the commemoration of the 1941 Bucharest pogrom, he advocated caution when looking at the discouraging results of a study on perceptions on the Jews. He said the surveys might be worth looking at, but stressed the fact that more and more non-Jewish Romanians were attending events such as the ceremony he was speaking, which in his view was a sign of how antisemitism is fading in significant segments of Romanian society.

He had excellent relations with the German minority in Romania and the successive German ambassadors in Bucharest. In recent years, Vainer repeatedly condemned the comments of a number of Social Democratic Party leaders who called Romania’s president, Klaus Iohannis, a Nazi because of his German origins.

Ovidiu Gant, who represents the German minority in Romania’s parliament and was Vainer’s colleague at the Minorities Parliamentary Group for over a decade, said at the funeral that he was “profoundly impressed” by the way that Vainer, as a Holocaust survivor, showed sympathy for Germans in Romania.

“The German minority is profoundly grateful to him for the singular way in which he defended us when we were subjected to coarse public attacks,” Gant said.

In one of his final public appearances, Vainer and his successor at the helm of the community, Silviu Vexler, voiced concern over the recent entry in the Romanian Parliament of the Alliance for the Union of the Romanians, known as AUR. The populist right-wing party obtained 9% of the vote in the December 2020 elections. Some of its leaders have praised antisemitic historical figures and members of Marshal Ion Antonescu’s government, which directed several massacres of Jews during World War II, drawing condemnation from the Israeli embassy and civil society leaders. AUR’s leader, George Simion, attended Vainer’s funeral on Tuesday.

Since last year, Romania’s Jewish community leaders have denounced a recrudescence of old antisemitic prejudices — such as blaming Jews for the Soviet takeover of the country —  in the public discourse, after Vexler championed a law that would exclude former fascists from compensation for having been persecuted by the communist regime.

Asked in last year’s interview about antisemitism in Romania, Vainer warned against exaggerations. “For example, some cemeteries have been vandalized recently, and surely there are some extremist elements within any society; but, in general, one could safely sleep at a Jewish cemetery,” he said.

“There are deviations, yes, but we shouldn’t make this the end of the world or say that in Romania there’s a ferocious antisemitism,” Vainer concluded.

Speaking about the future of Romanian Jewry, Vainer was realistic. “The number Jews is in a continuous decline, and demographic laws have the final say, but there will always be a kernel that will always act to preserve what we’ve had and all what it means.”

Vainer, who did not have any children, is survived by his second wife, Anette Vainer. One of his Israeli nephews attended the funeral.