‘Remembrance is constantly evolving’: This year’s Yom Hashoah Holocaust memorials are forced online by the coronavirus

(JTA) — For more than three decades, thousands of teenagers from dozens of countries have trekked each April to Auschwitz to learn about the horrors of the Holocaust.

This year, they’re staying home. With the coronavirus pandemic making travel and gatherings impossible, the March of the Living, like so much else, is taking place exclusively online.

So are countless other memorial programs developed for Yom Hashoah, the international Holocaust remembrance day that this year is taking place April 21. They include films, prerecorded concerts and talks by survivors and even the recitations of names of victims that are a centerpiece of observance in many communities.

Coming 75 years after the end of the Holocaust and as the coronavirus poses a serious threat to frail, elderly survivors, this Yom Hashoah is giving rise to innovation — but also grief about what has been set aside, and questions about whether online Holocaust education can replicate the impact of an in-person experience.

To cancel the March of the Living was “a heavy decision,” chair Shmuel Rosenman said from his home in Israel.

“You don’t know if the survivors will be able to come next year … because of their age or because they are not with us any more,” he said. “But sometimes, you know, if you have a tsunami you have to run away as fast as you can.”

Instead of convening young adults in person, this year the March of the Living will broadcast an online ceremony April 21. The organization also is launching an online memorial with “virtual plaques of remembrance.”

Also marking the day with an online remembrance program: the World Jewish Congress, formed in 1936 in Geneva, Switzerland to defend the rights of Jews and Jewish communities worldwide. The group is premiering a video that includes testimony given at WJC’s event in Krakow, Poland, in January by survivor Rachmil (Ralph) Hakman, who died in March.

Hakman, who was 94, had been planning to return to Auschwitz this spring, according to reports about his death.  Menachem Rosensaft, the World Jewish Congress’s associate executive vice president, told JTA that he was told Hakman died of COVID-19. Meanwhile, Rosensaft had planned to take part in WJC’s ceremony this month at the site of the Bergen-Belsen concentration camp, where he was born in 1948 in the nearby displaced persons camp to parents who had survived the Holocaust. 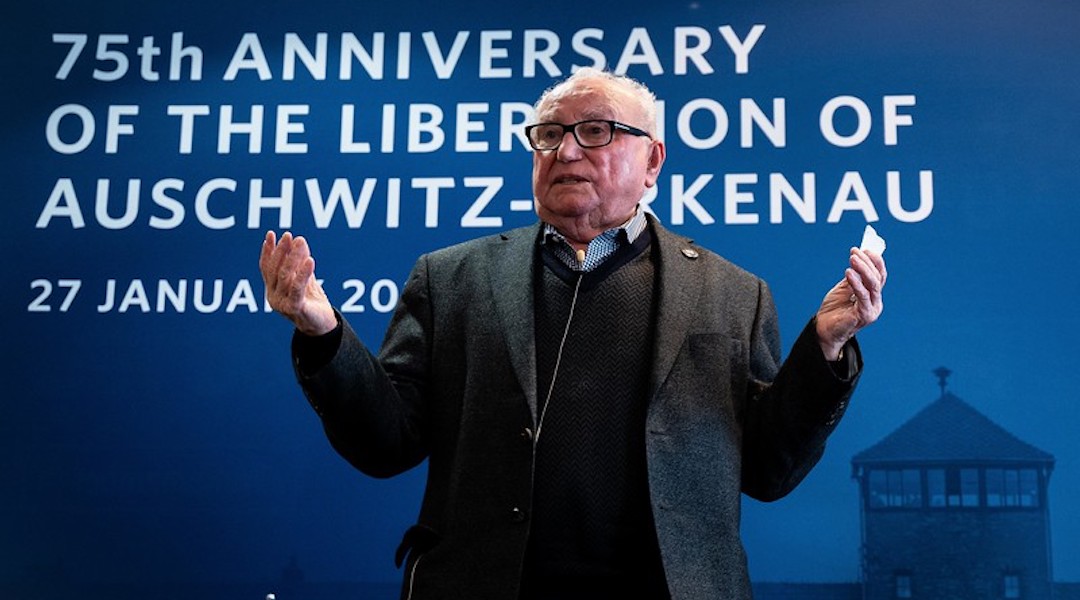 Holocaust survivor Ralph Hakman, who died last month at 94, had been planning to visit Auschwitz this year. (Phelia Barouh for World Jewish Congress)

Rosensaft said he has been struck by the pause the pandemic has placed on public expressions of grief about the Holocaust.

“This is the first time there will be no commemorations on the sites of the camps, or in synagogues or Jewish centers, or the U.S. Capitol rotunda, or the United Nations, or anywhere,” he said.

The online ceremonies are wide-ranging and, in many cases, the first that Holocaust education groups are designing for an online-only audience. Assembled in record time are countless contributions:

The shift to online memorials this year accelerates a trend toward digital education approaches that has already been underway as the number of living survivors diminishes, according to Lennart Aldick, deputy executive secretary of the Berlin-based International Holocaust Remembrance Alliance, a network representing 32 countries.

One of the most prominent examples of that trend is the USC Shoah Foundation’s Dimensions in Testimony, an interactive program that started recording “two-dimensional” interviews with survivors in 2014. Another is the Falstad Center in Norway, which uses virtual reality to allow visitors to “see” that concentration camp site and supports other institutions to develop similar tools.

“The effectiveness of such approaches… needs to be assessed,” Aldick said. But, he added, “it is safe to say that due to [the pandemic], many of these developments will enter the spheres of education and remembrance much quicker and profoundly than many would have expected a few weeks ago.”

When his planned Holocaust memorial in Prague was cancelled, Mark Ludwig, executive director of the Terezín Music Foundation, decided to “build a program that would give a sense of community within our homes.” In the end, several survivors and numerous renowned artists — including cellist Yo-Yo Ma and the Israel Defense Forces’ chief cantor Shai Abramson — delivered performances from their homes for a concert that premieres Sunday.

The resulting program, Ludwig said, is intended as “a program of remembrance and comfort for us, for what we are all enduring: this pandemic.”

“Remembrance is constantly evolving, because it is in the hands not only of the survivors but future generations,” he added. “They all bring to the table something of what resonates in their own life and how they connect to the Holocaust.”

This year, it is not hard to make a connection between the privations induced by the pandemic and the Holocaust, even as the two historic traumas are dramatically different in important ways.

“All of a sudden, everyone is in the same boat,” Rosensaft said. “Everyone is afraid of this invisible but all powerful enemy that strikes anyone at random. We are all afraid, all afraid of having loved ones who will end up in a hospital without us; we all see people dying on their own. … We are all fighting fear.” 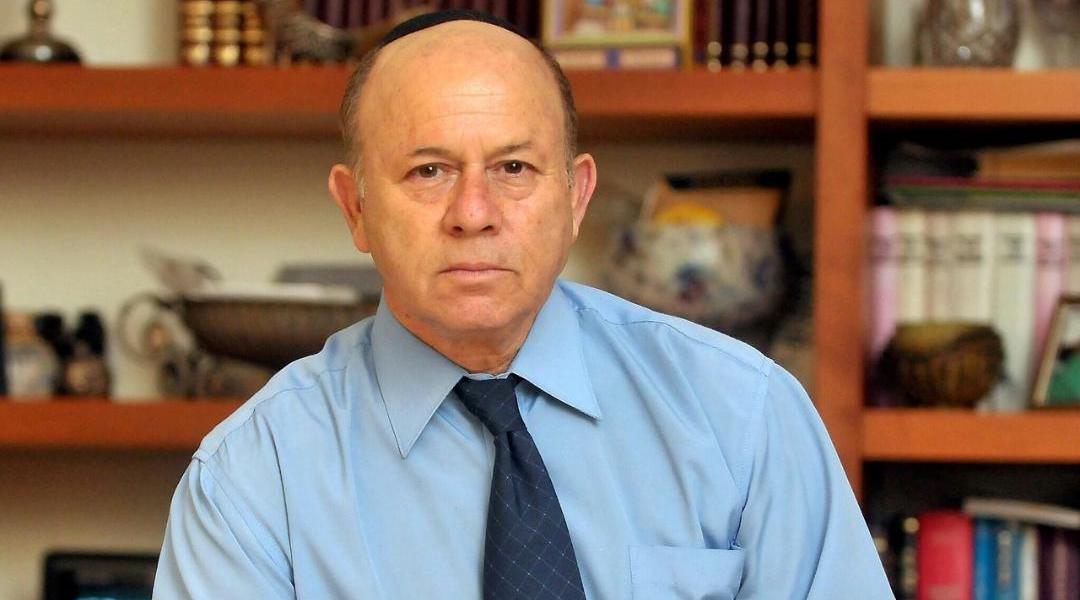 The March of the Living chair Shmuel Rosenman said canceling the annual event was a “heavy decision.” (Courtesy of Rosenman)

In Ludwig’s film, Anna Ornstein tells the story of how her mother found an apple core for her, at Auschwitz. To this day, Ornstein — who told JTA that she was “delighted” to be invited to participate in the film because “we will not be able to gather in any particular place, and express our feelings about those years” — never wastes a single bit of apple.

Eating the core “always raises my spirits and renews my belief in miracles,” the 93-year-old Boston-based psychoanalyst says in the story, first published in her 2004 memoir, “My Mother’s Eyes.”

Today, “everything in our lives is topsy turvy” because of the pandemic, Ornstein told JTA. “Maybe it is telling us that unless we learn to share and take care of others, we will not survive on this earth.”

Indeed, part of what sets Yom Hashoah apart this year may be its renewed potential to make history relevant.

“I teach, live and breathe Holocaust history and memory, and personally I think that is helping me cope with what is happening in the world,” said Danny Cohen, professor at the School of Education & Social Policy and the Crown Family Center for Jewish & Israel Studies at Northwestern University.

As the founder of the Unsilence, a nonprofit that designs online education on “hidden Holocaust histories,” Cohen has worked with Northwestern’s Hillel to organize an online event that focuses on the story of man who comes out as gay to his parents — both Holocaust survivors.

The Holocaust history “reminds me that there is a much bigger picture we are living in,” Cohen said.

“That’s not to minimize the real grief, anxiety and loss that many people are experiencing now,” he said. “But when we study history and how it connects to today, it can give us a sense of purpose, and meaning and remind us of the bigger context in which we are living.”