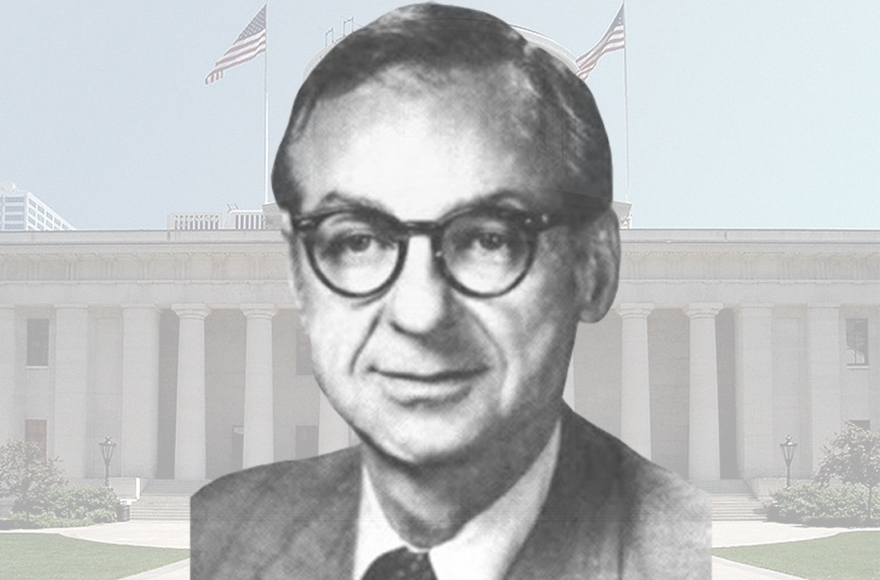 WASHINGTON (JTA) — There’s a nail-biter in Ohio’s 12th District, if you haven’t noticed.

Danny O’Connor, a Democrat, has refused to concede to Republican Troy Balderson following Tuesday’s hair’s-breadth special election for the seat encompassing Columbus and its environs. The winner will succeed longtime Republican incumbent Pat Tiberi, who abruptly left Congress for the private sector.

No major news outlet has declared a winner – the gap between O’Connor and Balderson is a third of the size of the number of provisional ballots yet to be considered.

O’Connor would be the first Democrat to take the district since Bob Shamansky served from 1981 to 1983. Shamansky’s life was marked by hardship, Jewish pride and tilting at windmills.

In describing the significance of so close a race, reporters have pointed out that the district has been Republican since the Reagan era in the 1980s or hasn’t gone for a Democrat in all but two years since the days of FDR going back to the ’30s and ’40s.

The winner of that single term, a major upset in 1980 that ousted 11-term Republican Sam Devine in an otherwise bad year for Democrats? Shamansky.

Shamansky was something of an outlier: A lifelong bachelor who had overcome a respiratory illness as a child, he was quixotic, taking on big tobacco in Congress, “which was probably not politically astute for a freshman congressman,” he once said. He had come up sort in his bid to oust Devine 14 years earlier, in 1966, when it seemed impossible.

His iconoclasm likely cost him a second term. In addition to angering the powerful tobacco lobby, Shamansky refused to endorse Vern Riffe, the speaker of the state House and its most powerful Democrat, for governor, and at a particularly inopportune time: Ohio’s House was redistricting, and Riffe, according to this account in the Columbus Monthly, promptly redestricted Shamansky out of a job.

Shamansky remained a lifelong and active member of his Jewish community.

“I’ve never not been a part of the Jewish community,” he told the Columbus Jewish Historical Society in 1989.

Shamansky saw himself as part of a generation that transitioned from Jews who played down their Jewishness to those who were proud of it.

“I grew up during an age that was ‘sha, sha zag gornisht,’ which means ‘quiet, quiet, don’t say anything,’” he told the historical society in 1993.

“There were these two worlds, the Jewish world and the world in general. I think I functioned in both without feeling that my being Jewish was disqualifying, other than some clubs which obviously I could visit but could not join. I think those barriers are now down for people younger than myself.”

Shamansky, a lawyer who graduated from Harvard law school, brought his Jewish sensibility to Congress. His spokesman was Eric Rozenman, a Columbus native who went on to a career in Jewish journalism (editing the Washington Jewish Week) and advocacy – he is now a communications consultant to the Jewish Policy Center, a conservative think tank.

In 1982, Shamansky warned Secretary of State George Schultz that he would not successfully pressure Israel to make concessions unless he was able to show its people and the U.S. Jewish community that Arabs “explicitly” recognized the country. The Reagan administration at the time was making much of covert Arab-Israel ties as a harbinger for a better future. (Nothing much has changed.)

He tried again for Congress in 2006, a good year for Democrats, when he was 79, and spent $1 million of his own money, but he lost to Tiberi. Prone in his later years to depression, he sought counseling, and family and friends believed he had rallied.

Shamansky, whose parents divorced when he was a child – unusual at that time – was haunted throughout his life by a 1951 automobile accident that killed his best friend, Ted Huntington. Shamansky was driving, but the accident was not his fault.

Sam Shamansky, his nephew, still could not process his uncle’s suicide three years later. Speaking to Columbus Monthly, he recalled his uncle “would tell us, those of us who are sometimes paralyzed by fear, ‘Why take yourself out of the game?’”

As for the significance of this week’s election, Donald Trump won the district by 11 points in 2016 and Tiberi won it by a whopping 36 points the same year, so just getting this close is a morale booster for Democrats, who see it as auguring their takeback of the U.S. House of Representatives in November.

(Even without the an official winner, Trump, who stumped over the weekend for Balderson, rushed to declare victory and take credit for it.)