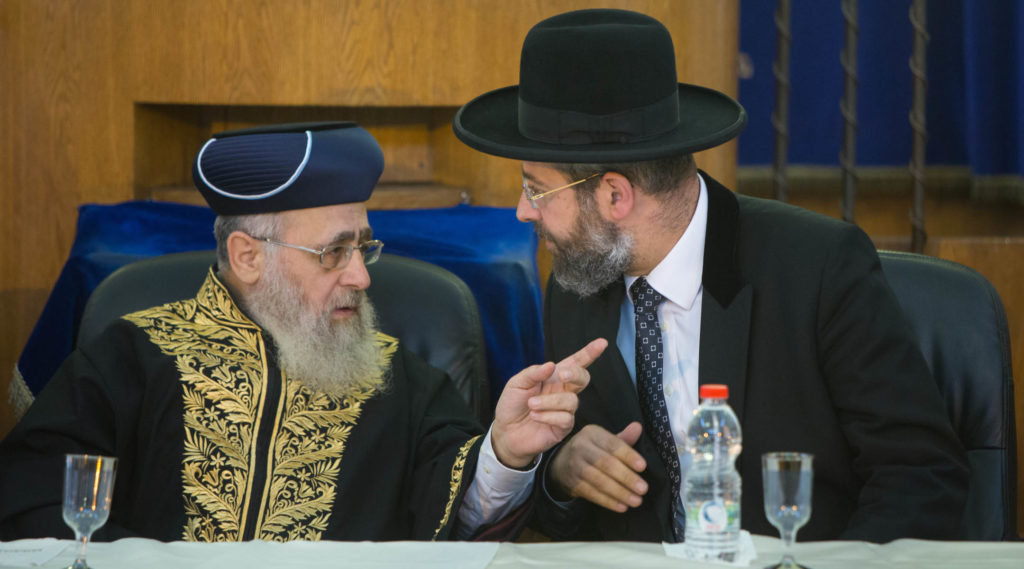 JERUSALEM (JTA) — Mikhail (not his real name), who immigrated to Israel with his parents during a wave of migration from the countries of the former Soviet Union, recently was engaged.

He went to the Chief Rabbinate to register his upcoming wedding — couples must prove their Jewish identity — and like many “Russian” Israelis was asked to return with documents proving his Jewishness. Mikhail was asked to present seven different documents that included things like his grandparent’s Jewish marriage contract and his mother’s birth certificate.

According to Itim, an Israeli organization that shared Mikhail’s story, the Chief Rabbinate was unconvinced by one of the documents and thought it raised the possibility that Mikhail was not Jewish. It decided to place him on the list of non-Jewish citizens who cannot marry a Jewish Israeli through the Chief Rabbinate — in Israel, the only way a Jew may marry.

Adding insult to injury, the Chief Rabbinate put all of Mikhail’s siblings on what some critics are calling the “blacklist” and threatened to retroactively annul his parents’ marriage.

Mikhail’s story is not unusual, and is becoming even more common, according to Itim’s director, Rabbi Seth Farber. And in an increasing number of cases, the Chief Rabbinate has asked people, many of them immigrants or children of immigrants from the former Soviet Union, to undergo DNA testing to prove their Jewish roots.

“A new culture has developed within the Rabbinate that suspects everyone and relies on documents and science and technology, and not on religious norms,” Farber, whose organization helps Israelis navigate the nation’s Orthodox-run religious monopoly, told the Jewish Telegraphic Agency.

A study recently released by the Israel Democracy Institute and Itim warns that over the next two decades, hundreds of thousands of Israeli citizens from the former Soviet Union or of Ethiopian descent may need to undergo a process to validate their Judaism.

Although those numbers may appear small, Itim and other advocates say the process is humiliating, demoralizing, unnecessary and undertaken with no clear or uniform standard for validating a person’s Jewishness .

Immigrants to the country must prove to a rabbinical court that they are Jewish. Defenders of the Chief Rabbinate’s policies say tens of thousands of emigres from the former Soviet Union came under Israel’s Law of Return and needed to have only one Jewish grandparent to qualify for citizenship. Jewish law, or halacha, they say, only recognizes as Jewish those whose mothers are Jews, or who themselves converted to Judaism under approved authorities. The demand for a paper trail assures those claiming to be Jewish really are, they say.

According to the study, however, “This move represented a major departure from the halakhic tradition, which holds that individuals’ declaration that they are Jews is sufficient for them to be recognized as such.” It also deviated from a halachic principle that emphasizes the “presumption of Jewishness” for members of an established community or from a pool of Jews with similar backgrounds.

Shuki Friedman, one of the study’s authors and the director of the Israel Democracy Institute’s Center for Religion, Nation and State, said the rabbinical courts can be a very unpleasant experience for the person whose Judaism is being investigated. The Chief Rabbinate appoints a “Jewish investigator,” who assesses the the applicant’s documents and is familiar with the history of the Jewish communities in the areas from which the immigrants originated.

Some rabbis are now asking individuals whose Judaism is in question to take DNA tests to prove they are Jewish. This is not official policy for the Chief Rabbinate, Friedman stresses — but it might just be a matter of time.

Farber said that in the past two years his organization has represented at least 14 people who were asked to take DNA tests, which he calls a “scientifically flawed and Jewishly misguided approach to proving Jewish identity.”

If the requests for such genetic tests continues to increase, Farber said he will ask the civil Supreme Court to rule that the Chief Rabbinate has no authority to order such tests.

The Chief Rabbinate, he said, argues that it does not force anyone to undergo a DNA test if he or she does not want to. But in practice, declining leaves prospective spouses in limbo, for they cannot marry without the Chief Rabbinate’s go-ahead. The DNA test issue was taken up by Avigdor Liberman, head of the Yisrael Beiteinu party, which represents many immigrants from the states of the former Soviet Union.

A spokesman for the Chief Rabbinate did not respond to JTA’s request for an interview.

Farber said that a cloud of suspicion about Jewishness now surrounds anyone who comes from overseas, including Jews from the United States.

“Instead of a country who welcomes immigrants, we suspect them,” he said.

A 2010 statement of principles on Jewishness was supposed to standardize what the Chief Rabbinate expected in terms of the rules and regulations for determining Jewishness. But it has not been able to standardize things enough.

The IDI-Itim study includes recommendations for the Chief Rabbinate to make the process less cumbersome and more respectful for those who must undergo a verification process.

Among the recommendations: Codify a halachic policy that “recognizes the presumption of Jewishness and rules of evidence that were the norm for the Jewish people over the generations”; train rabbinical court judges so that they acquire expertise on the issue; and reduce the number of investigations of Jewishness and make such investigations less threatening and less intrusive.

Friedman said there is potential to change the process to make it more “friendly,” but it will not change the procedure dramatically. For real change to occur, the Chief Rabbinate would have to adopt a different halachic attitude toward the issue. And Friedman is not very optimistic about that.

Farber believes it is going to take a Knesset law delineating the reach of the Chief Rabbinate to improve the situation.

“It needs a government that is willing to understand that the Zionist enterprise needs to be embracing,” he said, and to tell the Chief Rabbinate that it is overstepping its legal and religious authority.