JERUSALEM (JTA) — Most of Yael Eckstein’s neighbors didn’t know that her father was the head of one of the largest charities supporting Jews in Israel and around the world until he died earlier this month. Many of them still don’t think that is important.

That’s OK with her: She doesn’t thrive on publicity like he did.

Rabbi Yechiel Eckstein, founder and president of the International Fellowship of Christians and Jews, or IFCJ, died earlier this month of a heart attack at the age of 67. His death leaves his daughter to run an organization that raises about $130 million a year, mostly from evangelical Christians. And a lot of that money came in due to her father’s strong and charismatic personality.

Yael Eckstein had known that she would be taking over for her father at the fellowship. Three years ago he blessed her, literally – the moment was captured on video — after determining that she would be the best person to carry on his work. He began to mentor her, handing over more and more responsibility and decision-making power.

A year ago, the group’s board of directors selected Yael Eckstein to be its president-elect (her father was not in the room during the vote, she says). This was all in preparation for the rabbi’s retirement, which was scheduled to begin about two years from now.

But when the Soviet Union began to collapse, allowing Jews by the early 1990s to leave in droves for Israel, the United States and other countries, Christian leaders came to the rabbi and asked them how they could help. This began the group’s first major fundraising effort, “On Wings of Eagles.” Since the first planeload of Jews from the former Soviet Union arrived in Israel in 1992 under the auspices of the fellowship, the program has brought hundreds of thousands of Jews to Israel from countries including Russia, Ethiopia and Brazil.

Yechiel Eckstein moved to Israel in 2000 and opened an office in Jerusalem. Once he saw how great the needs were in the Jewish state, he began raising money to help poor Israelis — sometimes in competition and more recently in concert with the government, the quasi-governmental Jewish Agency for Israel and the range of Diaspora-based Jewish philanthropies.

Yael Eckstein and her husband, a native Israeli who moved to the United States at 7, made aliyah in 2005, arriving on her father’s doorstep in Israel eight days after making the decision to move. While living with her father, she saw what the fellowship was doing and decided that she needed to be a part of it.

But her father wanted her to attend law school and refused to hire her, so Eckstein went to the head of the Israel office and asked for a job. For a year she stuffed envelopes – that was fine with her father, who thought it would push her to law school. When she saw no real chance for advancement in the Israel office, she called the Chicago office and asked for a position. That’s when she started talking to the donors.

During the day she cared for her infant daughter, and by night she called donors halfway across the ocean on her father’s behalf. The donors loved it, and so did the younger Eckstein.

“Once I started talking to the donors I fell in love with them,” she says. “I caught the vision.”

Eckstein has since served in several positions in the organization, including global executive vice president, senior vice president, and director of program development and ministry outreach. Her father at some point gave up on the idea of law school.

Eckstein’s sink is overflowing with dishes and a child’s ride-on toy lies on its side in the cheerful and light-filled kitchen in her home in a sleepy residential neighborhood in a northern Israeli city. Eckstein explains that she left her house at 2:30 that morning to meet a plane carrying more than 240 new immigrants from Ukraine, leaving her husband to take care of the morning routine for their four young children.

On a chest of drawers a large memorial candle, meant to burn throughout the week of shiva, is lit. Shiva has been over for nearly two weeks, and the shloshim, the 30-day mourning period for her father, will not take place for another week. Eckstein says she plans to keep a candle burning in her father’s memory for the whole year of aveylut, or mourning. 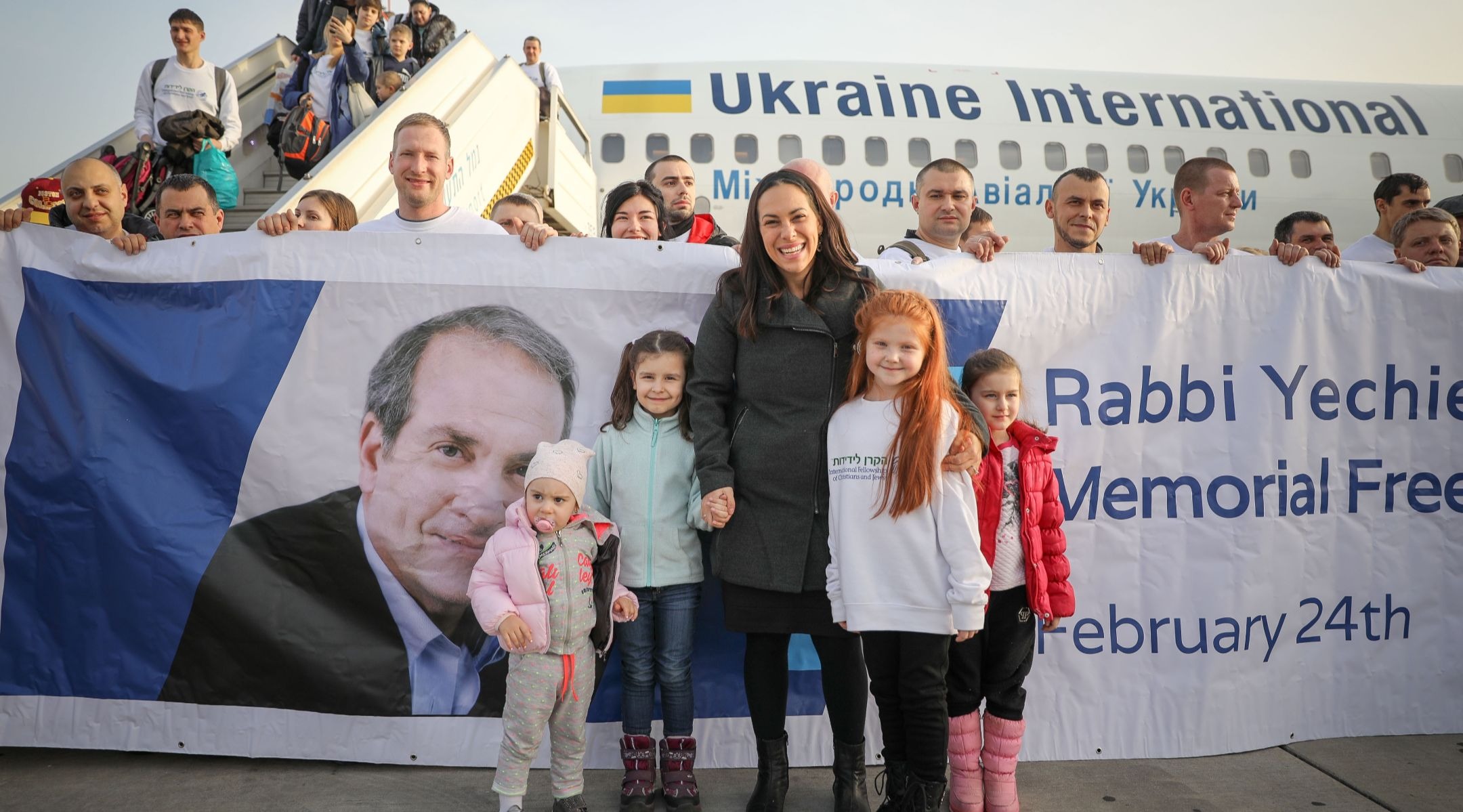 Yael Eckstein greets some of the 243 immigrants from Ukraine on the “Rabbi Yechiel Eckstein Memorial Freedom Flight” arriving in Israel on Feb. 25, 2019. (Noam Moshkowitz/IFCJ)

The immigrant flight that she met that morning was dubbed the “Rabbi Yechiel Eckstein Memorial Freedom Flight.” A flight also arrived the day of his funeral, and immigrants continue to arrive regularly under the fellowship’s auspices. She meets a flight about once a month.

Eckstein travels to the Jerusalem office about twice a week, though it practically runs without her. Her highest priorities, she says, are fundraising, marketing and donor relations. She oversees 200 fellowship employees in Chicago, Israel, Korea, Brazil, and Canada.

She says her anonymity is important, unlike her father, who was recognized everywhere he went and was criticized at times as a self-promoter.

Outside of Israel, she has already been introduced to donors as her father’s successor, and they seem to love her.

“But I am not going to base the entire organization around me,” she says.

Eckstein knows how to talk to the donors. In the videos she makes for them, posted on the fellowship’s website, she speaks about spiritual connections and being blessed. It’s not an act, she says. She practices Orthodoxy, but calls herself a “religious rebel,” saying that she connects to Judaism through spiritual eyes.

“I’ve never really fit into a box. I’m my father’s daughter,” she says.

Her father was an ordained Orthodox rabbi. When Yechiel Eckstein began working with Christians he was shunned in his own community, including not being called to the Torah for an aliyah.

Israel and the immigration establishment would later be happy to accept the money he raised, but bristled when he demanded a seat at the table in setting policy for immigration and absorption. Eventually he became a member of the Jewish Agency’s board, but broke with the agency about five years ago. His fellowship began running its own aliyah fights and including extra grants, and its volunteers help the newcomers find an apartment and settle down in a community. Eckstein says the olim that come on the fellowship’s flights need the extra attention.

Eckstein is happy that her father lived to see the Jewish community thaw in its feelings about the fellowship. She said the one dream that was unfulfilled at the time of her father’s death was to have the Jewish community involved in the organization and not leave all the heavy lifting for the Christians. In recent years, she says, Jews have learned to appreciate the fellowship’s work and “and even give money to it.”

“I think that the Jewish community loved the fellowship,” she says, “but sometimes had issues with my father.”

Eckstein says the organization is apolitical and gives money to needy Israelis wherever they live, and whether they are Jewish, Arab or Bedouin — something she believes all Jews should be able to get behind.

The organization runs about 450 programs across Israel — Eckstein can name most of them — and has over 5,000 volunteers. Some of the programs, once they are on their feet and have proven themselves, are turned over to the Israeli government, leaving the fellowship free to embark on new ones. Eckstein sees more partnerships in the organization’s future.

One of her father’s dreams was to build an International Center for Christian Outreach in Jerusalem to help shepherd the more than 1 million Christians who visit Israel each year, and send them home as ambassadors for Israel. Land was purchased for the center and half of the $60 million needed to build it raised. The plans for the building are almost completed as the fundraising continues.

The center will include a memorial to her father, as well as an auditorium and other areas that can be rented out to defray its costs.

Eckstein says her organization also has to educate Christian youth — her future donors — about why Israel is important. Like young Jews, they are often disassociated and assimilated. She notes that there are 150 Christian colleges and seminaries in the United States alone, and they are a good place to start. She wants the fellowship to reach them before the Boycott Israel movement.

The fellowship finished the last fiscal year in the red, down about 5 percent of its actual budget. Among the unexpected expenses was the war in Ukraine, during which the fellowship helped evacuate Jews to Israel. And donations are dropping.

Eckstein says it has been a “wake-up call” to the changing world of fundraising. Large organizations have to take “dramatic steps,” and she says she is ready with new and interactive fundraising models.

Still, Eckstein says, “I am not naive or oblivious to the fact that the fellowship might not survive.” But she says that “would not mean that we failed my father’s legacy” of bridge-building between Jews and Christians and their mutual love for Israel.

In the weeks before the rabbi’s death, the entire family was together for several simchas, including for the bat mitzvah of Eckstein’s daughter, a nephew’s bar mitzvah and a sister’s wedding. Two weeks ago Eckstein sat shiva at her father’s apartment with her two older sisters, who both live in the United States, and with the rabbi’s wife Joelle. Her mother, Bonnie, her father’s first wife, lives in the U.S., too, and often visits Israel.

Yechiel Eckstein clearly was looking forward to his retirement but, his daughter says, his soul may have known what was actually in store. At the recent Friends of the IDF Gala in Los Angeles, which she attended with her father since the fellowship provides it with funding, the rabbi introduced his daughter as his successor.