Progressives have a new definition of racism: ‘prejudice plus power’. What does that mean for Jews? 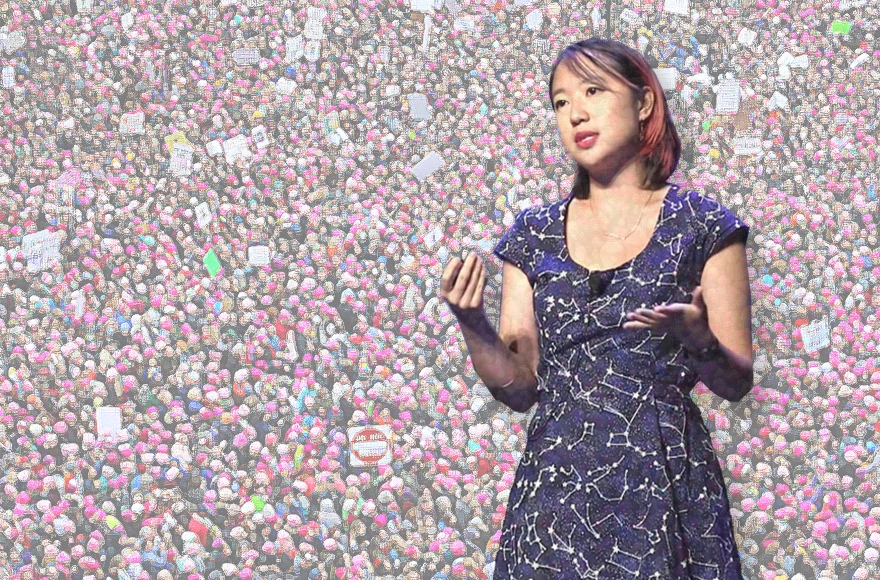 NEW YORK (JTA) — Are Jews too powerful to be considered “victims” of racism?

Some progressives think so and have been downplaying accusations of anti-Semitism in light of a debate over prejudice and power.

This week, The New York Times took heat for hiring Sarah Jeong, a technology writer, to its editorial board. Some have called her racist against white people, pointing to past tweets in which she proclaimed that “White men are bullshit” and “#CancelWhitePeople.”

The debate over her tweets often centered around the very notion of anti-white racism, and especially whether minorities (Jeong is Korean American) can be accused of racism when ridiculing the white power structure.

Former Bernie Sanders campaign aide Symone Sanders said on CNN last week that Jeong was not being racist because racism is only “prejudice plus power” — implying that only those in positions of power over others can be racist.

Sanders’ point is not new — she is building off the work of others, such as social scientist Patricia Bidol-Padva, who used the “prejudice plus power” definition in the 1970s. As a stand-up comedian might explain it, racism means “punching down,” not punching up.

Prominent activists such as Linda Sarsour and Melissa Harris-Perry have promoted the idea as well, and applied it to defend people they consider relatively powerless against charges of anti-Semitism.

“The thing I’m always worried about in the world is power, and how power is wielded in ways that cause inequity,” Harris-Perry said earlier this year about Nation of Islam founder Louis Farrahkhan, a notorious anti-Semite. “So if you can show me that Minister Farrakhan has taken his position and used his position to create inequity and inequality for Jewish people, then I will denounce that tomorrow.”

She went on to contrast Farrakhan to President Donald Trump, whom she considers a bigot and an anti-Semite who wields actual power.

“Because Louis Farrakhan is empowered to do what? He runs an organization that controls what resources? And creates what policy? And owns property where?” Harris-Perry asked rhetorically.

Some think this new formulation of racism has problematic implications for Jews, for multiple reasons.

First, it equates Jews with white and presumably institutionally privileged people, ignoring the history and ongoing prevalence of anti-Semitism.

“If Jews are seen as ‘white’ (which, in this permutation of progressivism, they are), and ‘whites’ cannot be subjected to racist attacks, then anti-Semitism becomes a trivial concern,” K.C. Johnson, a history professor at Brooklyn College, former Fulbright instructor at Tel Aviv University and regular Washington Post contributor, told JTA.

Second, it ignores the fact that Jews as a class are often falsely maligned as too powerful — which, paradoxically, would make them fair game for ridicule under the prejudice-plus-power definition.

“Antisemitism is a strange form of prejudice,” Olivia Goldhill wrote in Quartz. “Rather than denigrating Jews as inferior, it casts them as maliciously superior” — and thus worthy of denigration.

The U.S. Holocaust Memorial Museum recognizes anti-Semitism as racism and as “prejudice against or hatred of Jews based on false biological theories.” Last month, a federal judge ruled that racial discrimination law applies to Jews, noting that anti-Semites hate Jews for their “Jewish blood” and for “the fact that they were Jewish.”

However, especially on the left, some see anti-Semitism as a wholly separate phenomenon from — and perhaps a lesser form of bias than — racism. Racism, in this line of thinking, is fundamentally worse than all other forms of prejudice precisely because it is systemic.

“I want to make the distinction that while anti-Semitism is something that impacts Jewish Americans, it’s different than anti-black racism or Islamophobia because it’s not systemic,” said Sarsour, the Women’s March leader and prominent activist in the anti-Israel Boycott, Divestment and Sanctions movement, in a video posted to Facebook by Jewish Voice for Peace in April. “It’s not systemic, and we need to make that distinction.”

Jews, this argument purports, are too embedded within the system — that is, too powerful — to have prejudice effectively wielded against them as racism.

Rabbi Jill Jacobs, the executive director of the left-leaning T’ruah: The Rabbinic Call for Human Rights, largely refutes this idea.

“There is a difference between anti-Semitism and accusations of racism against white people, who are not a coherent historical ethnic group, and who have never been the victims of systemic prejudice,” Jacobs told JTA. “Jews have experienced a genocide within living memory, and continue to experience anti-Semitism both in words and in actions.

“Ashkenazi Jews enjoy white privilege much of the time, but also regularly encounter anti-Semitism perpetrated by people of many backgrounds.”

Johnson and others suggest that the prejudice-plus-power dynamic is in play in England, where Labour Party leader Jeremy Corbyn has been accused of enabling anti-Semitism within his party. According to this theory, Labour is nonchalant about attacks on Jews because they are as a whole relatively affluent and politically influential unlike say, Muslims, who lack the same institutional power and therefore need increased defending.

“We’ve had a preview of how this approach operates with recent events in the U.K. with the Labour Party,” Johnson told JTA.

Corbyn “understands racism purely through the prism of power — which, in his simplistic and vulgar Marxist worldview, Jews possess,” according to Brookings Institution fellow James Kirchick.

Bret Stephens, a conservative columnist for The New York Times, also worries about the effects of redefining racism as only able to “punch down.”

“The criterion for racism is either objective or it’s meaningless,” he wrote in a column welcoming Jeong to The Times. “If liberals get to decide for themselves who is or isn’t a racist according to their political lights, conservatives will be within their rights to ignore them.”

Jacobs, on the other hand, said she is interested in moving beyond the so-called “oppression Olympics” and toward actual problem-solving.

“There is still a lot of work to be done to dismantle racism, sexism, anti-Semitism and other isms within our society,” the rabbi told JTA. “We should focus on doing that work rather than argue about hierarchies of privilege and power.”