WARSAW (JTA) — A Warsaw mayoral candidate has fired one of his campaign aides over a 2010 Facebook post advocating the murder of Jews when he was 15.

Szpądrowski joked in the post about shooting Jews with an assault rifle after a friend wrote on his Facebook page that “tomorrow is the raid of the Jews on Warsaw! A Boeing 747-400 is arriving from TLV. If you want, we will go at 6.20am to the airport and welcome them with gas.”

“If it was not so early,” Szpądrowski replied, “I would greet them with a … Kalashnikov.” 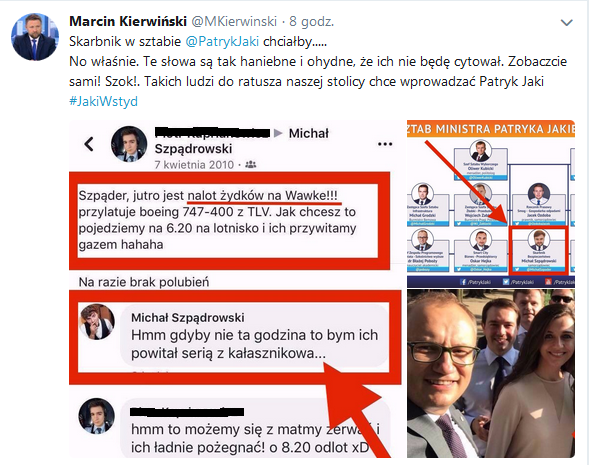 Following his firing, Szpądrowski tweeted that his remarks were “shameful” and he had made a donation to the Foundation for the Preservation of Jewish Heritage in Poland. He also declared that he was a “decisive enemy” of totalitarian ideologies and deeply respected the Jewish nation, “its suffering, history and culture.”

Jaki, a member of the ruling Law and Justice Party, is a right-wing populist who has said that Poland’s controversial law on Holocaust rhetoric, which bans falsely blaming the Polish state and people for “crimes against peace, crimes against humanity or war crimes” committed during World War II, provided his country with “catharsis.”

“I am not saying that we shouldn’t speak about difficult moments in the history of any country, any nation,” he told Reuters in February. “But if we are to build our international image as a state, we should base it on positive things.”