Pittsburgh tries to see the future through the darkness 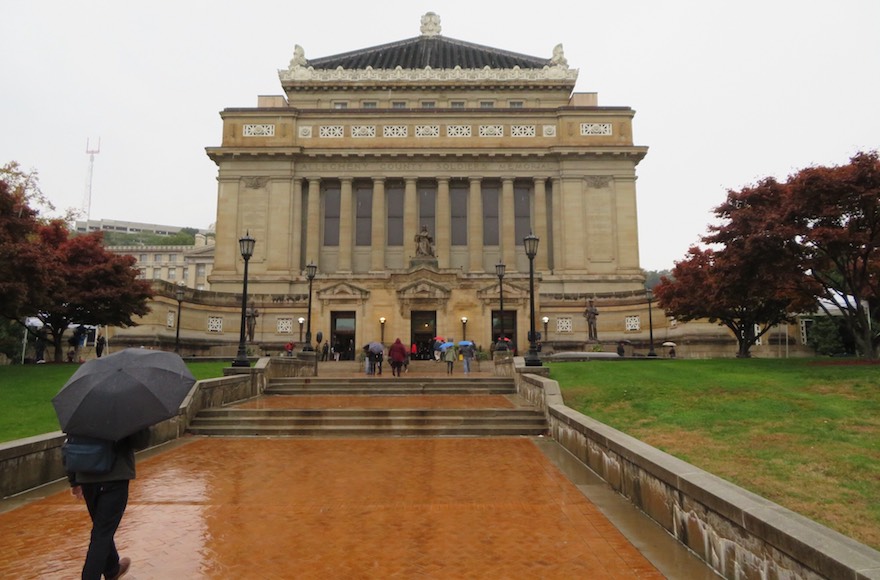 People enter the Soldiers and Sailors Memorial Hall in Pittsburgh, Oct. 28 2018, to attend a memorial service for the mass shooting a day earlier. (Ron Kampeas)

PITTSBURGH (JTA) — The day after the killings, a man who brings Jewish boys into the covenant and escorts the Jewish dead to their final resting place finally got to fulfill the mitzvah of shmira, keeping watch over the bodies.

The day after the killings, women gingerly entered a popular cafe and hugged the first responders taking a cappuccino break.

The day after the killings, congregants asked their rabbi whether it would be safe to let the kids out to play next Shabbat.

The day after the killings, Pittsburgh’s Jews threw up umbrellas to drive off a rain as cold and cutting as steel. They filed into halls that never were associated with Jewish worship, and they prayed, because one of their houses of worship had been profaned by a killer swearing that he would kill every one of them.

The day after a gunman entered The Tree of Life Congregation complex in Squirrel Hill and killed 11 people belonging to the three congregations that it houses, there were persistent, nagging questions.

The members of Congregation Dor Hadash, who lost Jeremy Rabinowitz, a beloved physician who was once president of the Reconstructionist congregation, filed into East Liberty Presbyterian Church. On their way in, congregants thanked the staff for giving them a place to grieve. When the room they were assigned proved too small for the hundreds who turned up, they thanked them again for moving them to a larger room.

On Sunday evening, most of them filed out and thanked the security and made their way to a vigil for the victims at Soldiers & Sailors Memorial Hall and Museum, where they joined thousands of others and sought answers.

“So God, why us?” said Rabbi Jeffrey Myers, rabbi of the Tree of Life*Or L’Simcha Congregation, who was the last to speak at the memorial hall. “Why couldn’t he turn his car in a different direction?”

He asked the question every clergyman asks at each worship service: Why do congregants sit at the back of the sanctuary? The stage was packed with an interfaith array of Pittsburgh’s clergy.

The laughter faded as Myers explained the deadly consequences: Of the 12 worshipers in the sanctuary at the time of the shooting, the eight at the back were easy targets. Seven died, one was wounded. The rabbi was able to pull the four at the front to safety.

“Seven of my congregants were shot dead in my sanctuary,” he said, and his voice was thick with the guilt that haunts survivors.

Where will the children play?

The questions flew at a meeting earlier in the day bringing together local rabbis and Jewish community professionals and officials from law enforcement and the state and the municipality,

Is this a trend?, the Jewish leaders asked, according to an official in the room. Was the gunman a lone wolf? Can we expect copycats? What do we do when Jewish day schools open tomorrow? Will there be extra police? (For now, it appears, yes: A police guard was set up across the street from the Jewish community center in the Squirrel Hill neighborhood, blocks away from the shooting, the deadliest attack on Jews in U.S. history.)

Rabbi Yisroel Rosenfeld, a Chabad rabbi who attended the briefing, said key questions were unanswered — were too open-ended to answer in the short term.

His congregants wanted to know what to do next Shabbat, a time that the Orthodox tend to allow their kids to run free in the neighborhood. Was that safe now? Was it reasonable?

“That needs to continue,” he said of the free play the kids enjoy. “What do you do to make sure that fear doesn’t prevail?”

At the Presbyterian church where the Dor Hadash congregants met, there were shared memories of Rabinowitz, a past president of the congregation. Media was not permitted to enter the hall, but the laughter and the sobs of the congregants wafted out of the room into the cavernous church where the Mellons, one of this country’s best known philanthropic families, are buried.

“I just hope we continue to be as welcoming,” a man said. 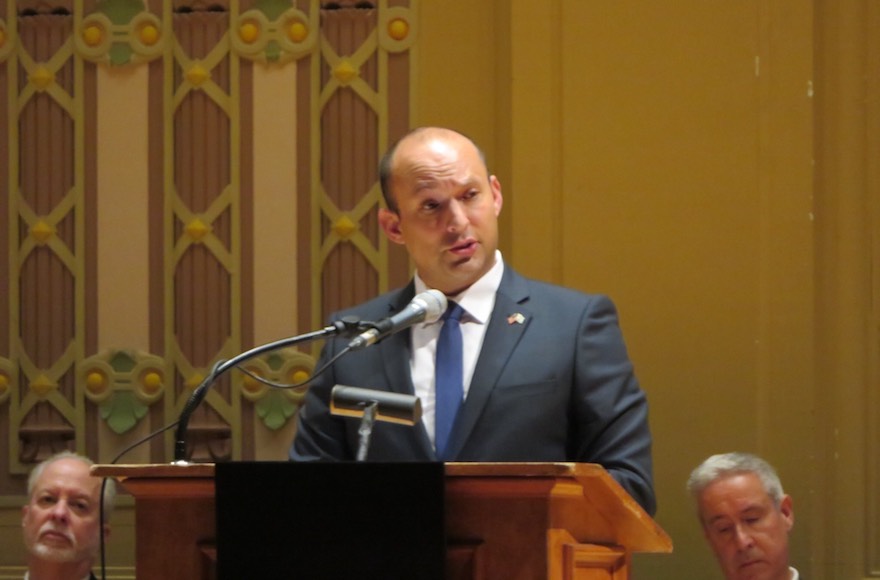 When can we do our duty?

Rabbi Elisar Admon fretted throughout Saturday: Law enforcement would not let him into the synagogue to attend to the bodies.

Admon is a mohel — trained to circumcise Jewish boys, joining them to the ancient Jewish covenant Abraham forged with God. He is also the representative in Pittsburgh of ZAKA, the Israel-based Jewish burial society that specializes in attending to terrorist sites, preparing bodies for burial.

He was attending services blocks away from the synagogue when he heard the sirens and assumed the worst, he told JTA in an interview. A man ran in and confirmed the congregants’ fears, and the synagogue went into lockdown. Once the all-clear was given, he ran to the site and tried to persuade law enforcement to allow him inside.

“We told them, we exist to help, we can help you and you can help us in our religious need” to bury the dead as quickly as possible.

Admon and a colleague stood in the chill until 9:30 p.m. when authorities allowed them to enter, not to touch the bodies, but to map out the carnage so they knew where to look for remains later.

“I’ve done this before,” in Israel, he said. “It always is hard. But it was hard seeing people you know, people you see in the street and say ‘shalom shalom’ to.”

It bothered him that the bodies did not have shomrim, the volunteers who keep watch on the dead until they are buried, reading psalms.

He went home and a law enforcement official called him at 4:30 a.m., saying he should come over and help bring out the bodies. “We had the ‘mini-funeral’,” he said, referring to the prayers he said. It was a measure of closure. He called on 11 volunteers to keep watch over the 11 bodies at the police morgue until the forensic coroner cleared them for burial.

“I don’t know,” he said. “It depends on when they are released.”

How do you recover?

Sunday morning at first was silent along Murray Street in Squirrel Hill, packed with kosher eateries and favorite cafes. Laura Horowitz, a congregant at Dor Hadash, greeted friends at the 61C cafe as they walked. They checked on one another (“Where were you” when it happened?) and exchanged hugs. Two women hugged two policemen taking a coffee break.

A press conference is taking place at the same time, naming the victims. Horowitz checked a friend’s phone and her face crumpled when she saw Rabinowitz’s name.

“The cliche is you come out stronger,” she said. “But I don’t know how you recover from the loss of place. That was where we were safe.”

“It starts with speech”

On Sunday evening, Horowitz was in attendance at the memorial service, and there were stabs at answers, from politicians, from Naftali Bennett, the Israeli minister of the Diaspora who flew in specially for the service.

The crowd appreciated the speakers, but their defiance seems wan adjacent to the grief.

The room recited Psalm 23, “The Lord is my shepherd,” the one in which the supplicant “fears no evil.”

But evil persists, and no one knows quite what to make of it. Myers, the Tree of Life rabbi, drew a line to the recent toxic political rhetoric. “It starts with speech,” he said to a standing ovation. “Words of hate are unwelcome in Pittsburgh!”

But minutes earlier, there was another moment, one of recognition. Wasiullah Mohamed, the executive director of the Islamic Center of Pittsburgh, said to cheers that the city’s Muslims had, in less than 24 hours, raised $70,000 for the families of the dead and wounded.

Then, like so many others throughout the day, he described what he felt when he heard the news. “I couldn’t see the city anymore,” he said. “I could just see its dark corners.”

The post Pittsburgh tries to see the future through the darkness appeared first on Jewish Telegraphic Agency.