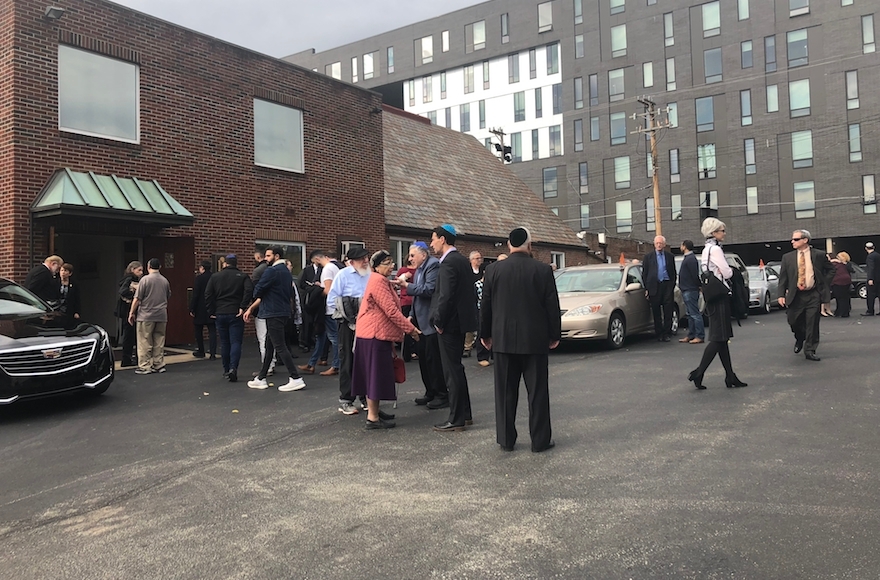 Mourners at the funeral for Melvin Wax in Pittsburgh, Oct. 31, 2018. (Arielle Kaplan)

PITTSBURGH (JTA) — Every Friday night, Melvin Wax would show up for services at the New Light Congregation in a jacket and tie. And early the next morning he would be back to pray again.

Wax was dedicated to his congregation. Last week, he was killed at the building where it met.

“Mel would pray from the heart,” Rabbi Harvey Brotsky, Wax’s cousin and a former rabbi at New Light, said in a passionate eulogy on Wednesday. “He wouldn’t just be going through the motions. And he prayed every single Shabbat that I was at New Light Congregation, unless he was ill, and he came early on Saturday. It cost him his life.”

Wax, 88, was one of the 11 victims of the synagogue shooting here on Saturday. On the morning of the attack, he was leading services at New Light, one of three congregations that meet at the Tree of Life synagogue in the Squirrel Hill neighborhood. He and several other New Light congregants were hiding in a storage closet when Wax opened the door and was shot.

At a funeral that drew some 200 people, Wax was remembered as a hardworking, kind man who was devoted to his family and community. Brotsky said Wax, an accountant, was a happy person and a baseball fan who loved watching the Pittsburgh Pirates.

“If you look in the dictionary under the word unselfish, you’ll see the name Melvin Wax because he was one of the most unselfish people I’ve known in my entire life,” Brotsky said. “If anyone on this earth walked humbly with their God, it was Mel Wax. He did not have a conceited bone in his body.”

Wax, his eulogizers said, didn’t have the easiest time growing up. His father died when he was 4, leaving his mother alone to raise her two sons. After graduating high school with honors, Wax was drafted, and served in Germany after World War II and then in the Korean War. Upon returning home, he graduated from college and became an accountant.

“I hated it so much,” Brotsky recalls Wax saying of his military service. But Wax would add, “I would do it over again in place of my brother, so that he wouldn’t have to do it.”

Hardship did not prevent Wax from leading a happy life, Pearlman said. The rabbi recalled Wax’s daughter Jodi saying that her father never raised his voice.

“He not only lived his life unselfishly before God, before people — he lived his life joyfully,” Pearlman said. “He was one of the happiest men I’ve ever met: content with his lot and passionate about what he believed in and how he practiced.”

Wax’s generosity and sense of duty continued until the day he died, Pearlman said. The rabbi said Wax inspired him to wear a jacket and tie to services, and was the kind of person who would not wait for others to perform a necessary task.

Wax also never stopped helping people. A month ago he learned how to register people to vote, and set up a registration booth in his apartment building’s lobby.

And whenever he would visit Pearlman’s building, he would deliberately park at a distance.

“He said, ‘I want to give people who have trouble walking the easiest path to the front entrance,” Pearlman recalled. “I can walk, thank God. I don’t need to park there.’”

Along with his daughter Jodi and her husband, Todd Kart, and his grandson Matthew Ryan Kart, Wax is survived by his brother and sister-in-law, Edward and Bonnie Wax.

Wax’s funeral was one of three that took place Wednesday for victims of the synagogue shooting. Two others were held Tuesday.