Pittsburgh is where I lived. Synagogue is where I’m home. 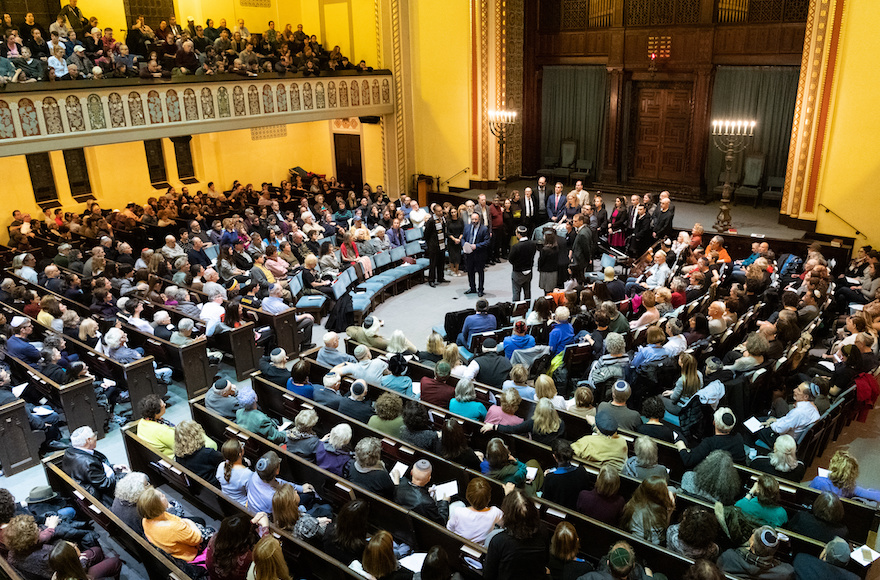 LOUISVILLE, Ky. (JTA) — On Saturday, the front line in the struggle to save and perpetuate Judaism ran through Pittsburgh, Pennsylvania.

I know a little something about that front line. Born in Pittsburgh, raised in her suburbs, an adult living on the North Side and East End of the city, I am – with apologies to my new hometown in this city – a Pittsburgher until I die.

As the editor of The Jewish Chronicle of Pittsburgh for 13 years, ground zero for my coverage was Squirrel Hill, the Pittsburgh neighborhood where Tree of Life*Or L’Simcha synagogue, the scene of Saturday’s deadly shootings by an anti-Semitic gunman, is located.

It is simply a beautiful place to live and be.

But everywhere are reminders that Squirrel Hill was, and is, the heart of Pittsburgh Jewish life. Bearded men in kippot and fedoras walk briskly to their next appointments. Women push strollers heavy with kids. Fliers for this Jewish event or that are taped to street lamps and shop windows.

And there are the synagogues.

Like everywhere, synagogue life is in jeopardy as Jews increasingly reject organized religion. Still, it is impossible to walk a couple blocks in Squirrel Hill without seeing a shul. They’re in old houses, stately temples with stained glass windows or buildings, like Tree of Life, constructed along modern architectural lines.

One congregation, according to urban legend, started life in a mansion whose previous owner’s wish was that a Jew never own it. That was the benign anti-Semitism we were used to until Saturday’s brand left us all scarred.

I know Tree of Life*Or L’Simcha very well. My great-uncle Herman Halpern, a giant in the Conservative movement of his day, was the rabbi there years ago, when it was just Tree of Life. I reported on a succession of rabbis. I covered its merger with Or L’Simcha, a new congregation that had no building. My wife, then just a student rabbi, was asked more than once to read Torah on Shabbat at Tree of Life.

And today it is on the Jewish front line. So is every synagogue in Pittsburgh, Louisville, North America, the whole world.

The 11 people who died Saturday lost their lives because they chose to express their Judaism in the house of worship. Had they rejected synagogue life, as so many others have, they would probably be alive today.

But they wouldn’t really be living. Part of what made them Jews, what gave their lives meaning, was what went on within those walls.

During his recent visit to Louisville, Jewish scholar Avraham Infeld, in his talks about the preservation of Jewish culture, made the case for strong Jewish community centers, but not at the expense of the synagogues. He said Jews are a people with a “God-centered culture,” and he took his fellow Israelis to task for rejecting the synagogue in droves.

If you go to a synagogue, if you support a synagogue – if you are on the front line – part of you is crying not only for the loss of life but for the assault on the idea of synagogue itself — literally, as a sanctuary. You may not have given voice to it, but I bet you feel it.

Synagogues are not profit makers. Far from high-tech startups, brewpubs or espresso bars, they’re a tough sell to millennials and Gen Z’ers.

But they are where Judaism happens every day. And they are threatened, mostly by the choices of Jews.

For those who have decided to express their Judaism in a way that does not include synagogue affiliation, OK, that’s your choice. Now is the time, though, to ask yourselves how you will express your Jewishness – now, after the worst, and perhaps the first, murder of American Jews in their own house of worship.

I don’t mean to demean Jews who have chosen to walk away from their faith or simply not to affiliate. I don’t know their experiences; I can’t walk in their shoes.

But as a Jew who is on the front line, like thousands of others, struggling to preserve a critical component of Jewish existence, I can say this: We need you. More than ever, we need you.

(Lee Chottiner, editor of the Jewish Louisville Community, served as editor of The Jewish Chronicle of Pittsburgh from 2001 to 2014.)

The post Pittsburgh is where I lived. Synagogue is where I’m home. appeared first on Jewish Telegraphic Agency.