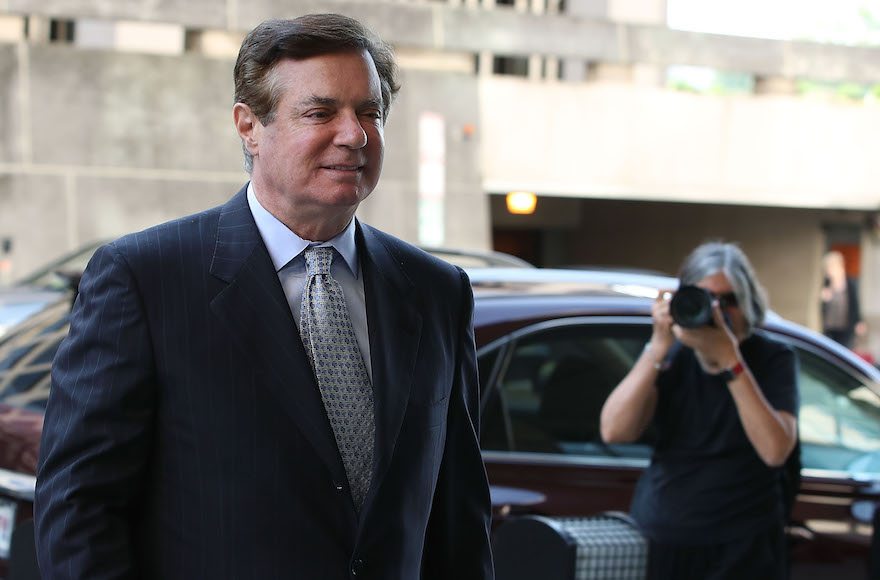 WASHINGTON (JTA) — Paul Manafort, the former campaign manager for President Donald Trump, solicited a senior Israeli official in a bid to get then-President Barack Obama to ease pressure on his clients, the Russia-allied leaders of Ukraine.

The revelation Friday, which also included a plan to turn Obama’s Jewish supporters on the president, came Friday as Manafort pleaded guilty to not registering as a foreign agent in a plea deal with Robert Mueller, the special prosecutor investigating alleged improprieties in Trump’s campaign and presidency.

The deal, which averts a trial, comes after Manafort was convicted on related fraud and tax evasion charges, and will be part of an overall agreement with Mueller to include cooperation with the investigation.

Mueller filed the indictment to which Manafort pleaded guilty.

Manafort, who represented Russian interests in Ukraine, in 2012 sought to smear Yulia Tymoshenko, the predecessor to Viktor Yanukovych, the Russia-supported president of Ukraine at the time. Yanukovych had arrested Tymoshenko, and Manafort hoped to tamp down criticism of the Ukrainian president’s treatment of his opponent.

“In October 2012, Manafort orchestrated a scheme to have, as he wrote in a contemporaneous communication, ‘obama jews’ disavow Tymoshenko and support Yanukovych,” the indictment said.

Part of the scheme included having a “senior Israeli government official” blast Tymoshenko’s party for its alliance with a smaller ultranationalist party known for making anti-Semitic statements. That, in turn, would focus critical attention on a senior Cabinet official in the Obama administration known to be sympathetic to Tymoshenko.

The American Cabinet official targeted by the scheme appears to be Hillary Clinton, then the secretary of state and in 2016 Trump’s rival in the presidential election. Breitbart, a right-wing news outlet, subsequently cited Liberman and an anonymous “prominent Jewish leader” in criticizing Clinton for a New York Times op-ed attacking the Yanukovych government.

Western-leaning democrats deposed Yanukovych in 2014. Mueller’s indictments have described a Russian government role in interference in the 2016 U.S. presidential election.