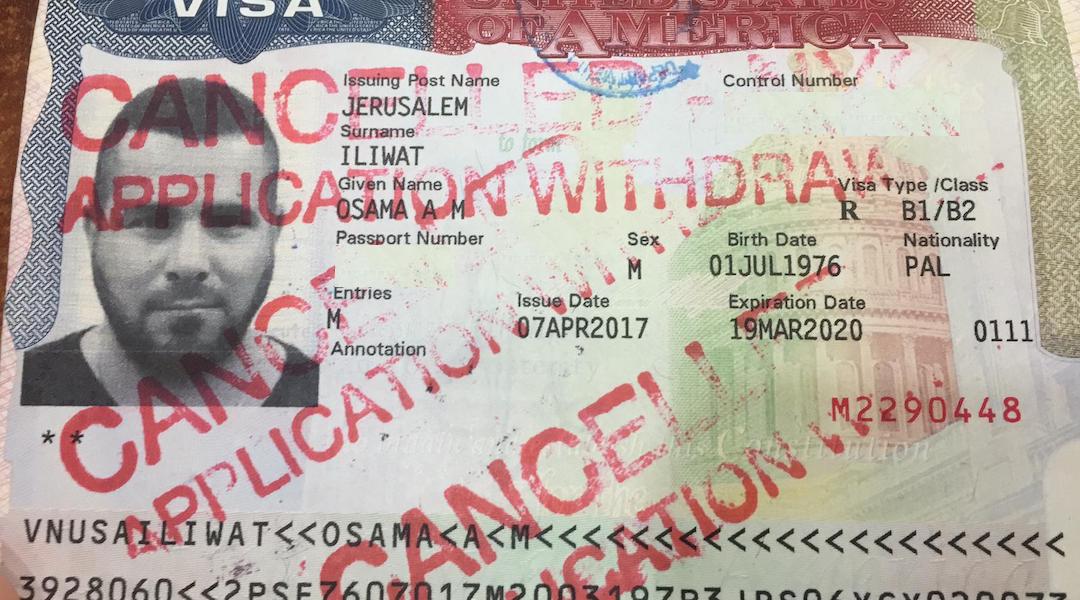 NEW YORK (JTA) — A Palestinian peace activist was denied entry to the United States and deported, despite having a valid visa.

Osama Iliwat, 42, was questioned over the course of eight hours by officials from Customs and Border Protection at John F. Kennedy Airport in New York City on Feb. 24 before he was sent on a flight back home. He was embarking on a speaking tour for Combatants for Peace, a group of Israelis and Palestinians who, according to its website, “have taken an active part in the cycle of violence; Israelis as soldiers in the Israeli army and Palestinians as part of the violent struggle for Palestinian freedom,” but now advocate joint nonviolent activism.

Iliwat had a three-year visa that allowed him to visit the United States, but Customs and Border Protection annulled it before Iliwat was deported. A Customs and Border Protection spokesman said the agency does not generally comment on individual cases. But according to documents obtained by the Jewish Telegraphic Agency, Iliwat was sent back on suspicion of wanting to remain in the United States as an immigrant.

He said the reason is a false pretense for keeping him out of the country. Less than a year ago, he traveled to the United States for a similar tour without incident. His deportation was first reported this month by +972 Magazine, an Israeli publication.

“That was the only reason they can use against me, they can’t find anything else, so they used this excuse to send me back,” Iliwat said. “They know that I’m going on a speaking tour. They know I have been in America more than one time.”

Iliwat lives in Jericho, and is a former Palestinian Authority police officer. He was active in the second intifada — a wave of Palestinian terrorism in Israel and subsequent Israeli clampdown on the West Bank — but said his activism was nonviolent, hanging flags and writing graffiti. He has never been in Israeli prison, he said.

Iliwat became active in Combatants for Peace after a friend brought him to a meeting with Jewish-Israeli peace activists.

“People are people, blood is blood,” he said in a call Tuesday organized by Encounter Programs, a nonpartisan organization that brings North American Jewish leaders to Palestinian areas to meet Palestinians and see their society firsthand. Iliwat has spoken to their delegations. “There is no difference between human beings. Our enemy is our fears. Our enemy is that we are not able to open up our eyes and see the other side.”

Iliwat’s case reflects the broad latitude officials at the border have to deny entry to people, particularly Arabs and Muslims, said Diala Shamas, a staff attorney at the Center for Constitutional Rights, a legal advocacy group that advocates for Palestinian causes. Shamas said that for Customs and Border Protection,  immigration concerns are “an easy way to use their discretion to not allow people into the country even though they have a valid visa.”

“It sounds like he’s actually being denied entirely because of his political activism and his identity as a Palestinian or maybe a Muslim,” Shamas said, calling it “something that’s unfortunately very common at airports across the country for anyone coming from the Arab world. To add onto that the Palestinian element is almost a surefire recipe for extra scrutiny.”

When he arrived in New York last month, Iliwat planned to speak to audiences at places like synagogues and universities. But when he arrived at JFK Airport at around 9 a.m. on Feb. 24, he said an officer at the passport check took him to a separate room, where he was questioned intermittently until 5 p.m. Iliwat said he was not given anything to eat until 4:30 p.m., when he complained. An officer first offered him candy before giving him hot food.

Iliwat said the Customs and Border Protection officers asked him about his activism with Combatants for Peace, his relationship with the leaders of the organization, whether he had been arrested recently, whether he plans to immigrate to America and which Palestinian political party he supports. He told them that he had not been arrested recently, he does not wish to immigrate to America and that he supports the Palestine Liberation Organization because it favors a two-state outcome to the Israeli-Palestinian conflict.

Iliwat said the officers searched his phone for at least 20 minutes, and escorted him whenever he needed to use the bathroom. The officers did not let him call anyone while he was detained, he said.

“He was showing me how friendly he is, but after the questions he was giving me an evil face,” Iliwat said of one of the officers. “I think I was detained because of my organization because they really did not like that some of the people of my organization were ex-fighters and were in jail.”

Following the questioning, Iliwat said, the officers took his fingerprints and a mugshot, and placed him in handcuffs. They stamped his visa with the word “cancelled.” He was made to board a 9 p.m. flight back to Qatar and then to Amman, Jordan, where he had departed.

American Friends of Combatants for Peace, a partner organization to the Israeli-Palestinian group, is consulting with the American Civil Liberties Union about possible next steps. Dror Ladin, a staff attorney in the ACLU’s national security project, said he’s not certain of the exact reason why Iliwat was denied entry.

But Ladin said the United States has sought to prevent speakers from coming to the country based on their ideology since at least the Cold War. Previous activists who were barred from entering include Pierre Trudeau, who later became Canada’s prime minister, and Mahmoud Darwish, the Palestinian poet.

“If Osama was excluded on the basis of his ideology, that’s certainly something that’s happened in the past in the United States,” he said. “It’s troubling if the government is seeking to exclude people based on their viewpoint.”

Yona Shem-Tov, Encounter’s executive director, said it was unfortunate that audiences in the United States would be deprived of hearing Iliwat’s story.

“Part of what inspires me about the work of people like Osama is that they’ve been willing to go through major transformations,” Shem-Tov said. “They’re willing to step out of entrenched paradigms. There is a courage and a rigorous discussion of the pursuit of a different way.”

Iliwat hopes to return to the United States to speak. He believes that he was barred not due to policy but because of the actions of the specific people who questioned him.