Pace of haredi Orthodox integration into Israeli life slowing down 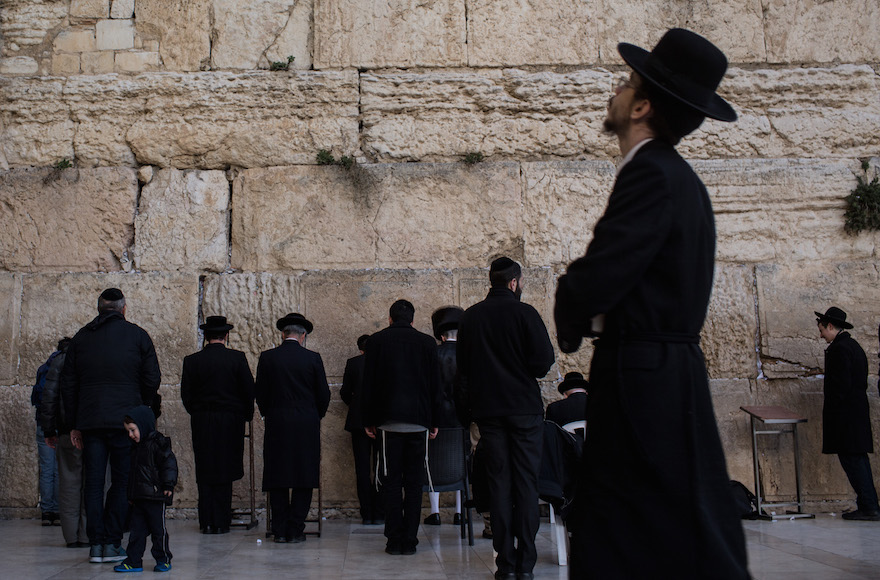 JERUSALEM (JTA) — The pace of haredi Orthodox integration into both the workforce and academy has slowed significantly, indicating a “worrisome” trend in Israeli society, a Jerusalem think-tank warned in a new report.

The Israel Democracy Institute said Wednesday that full-time yeshiva enrollment has increased among the fervently Orthodox haredim, rates of employment have slowed and fewer members of the community are enrolling in secular higher education.

According to the IDI, as of last year there were 114,000 haredi Orthodox men in full-time religious study, a rise of 21 percent over three years ago and a reversal of the previous trend of growing workplace participation.

By contrast, between 2013-14 there was a 16 percent drop in yeshiva enrollment. During the past decade, amid calls for reform, the number of haredi students had grown by 141 percent and the number of haredim registered in secular graduate programs as of 2017 was five times what it was in 2010.

“This year’s report reveals worrisome trends,” said IDI researchers Gilad Malach and  Lee Cahaner. “The findings show that the trend towards the rise in the rate of employment and academic studies has come to a standstill, after several years of a consistent increase in both. Although there is encouraging data regarding an increase in income and a decline in poverty rates, this appears to be the fruits of past government policies that encouraged higher education, army service and employment.”

Israel’s growing haredi population currently numbers over a million. Characterized by strict religious observance, the communities also exhibit lower rates of employment and military enlistment. Israel’s non-haredi policymakers, and even some in the haredi community, say the lifestyle is not sustainable economically and is a threat to Israel’s democratic and civic fabric.

Efforts to integrate haredi Jews grew apace in recent years. Although 45 percent live in poverty, the average haredi monthly income increased by eight percent between 2015-16, “reflect[ing] a rise in ultra-Orthodox salaries among those employed,” said IDI. While the poverty rate among the haredim is high compared to the 11 percent rate among other Israelis, it is actually a significant improvement over the 58 percent haredi poverty rate as recently as 2005.

The recent gains can be credited to the “rise in the number of well-educated members of the ultra-Orthodox community and the advancement of ultra-Orthodox workers in the labor market (as a result of a combination of appropriate skills and education, and government programs),” Malach and Cahaner commented. “Nevertheless the expenditures of the ultra-Orthodox are still higher than their income, which may point to the transfer of illegal funds and the receipt of unreported donations from abroad.”

Meanwhile, despite opposition by many rabbis to internet-connected devices, 54 percent of haredim in 2017 reported using a computer, an increase of 10 percent over 2007. The rate of enlistment in the military has also increased significantly, with 3,700 Haredim having enlisted in the Israel Defense Forces or a civilian national service framework last year, a slight increase.

According to a government report issued last year, Israel’s population will double in about 40 years. Some 29 percent — or 5.25 million of its projected 18 million residents — will be haredi Orthodox Jews.