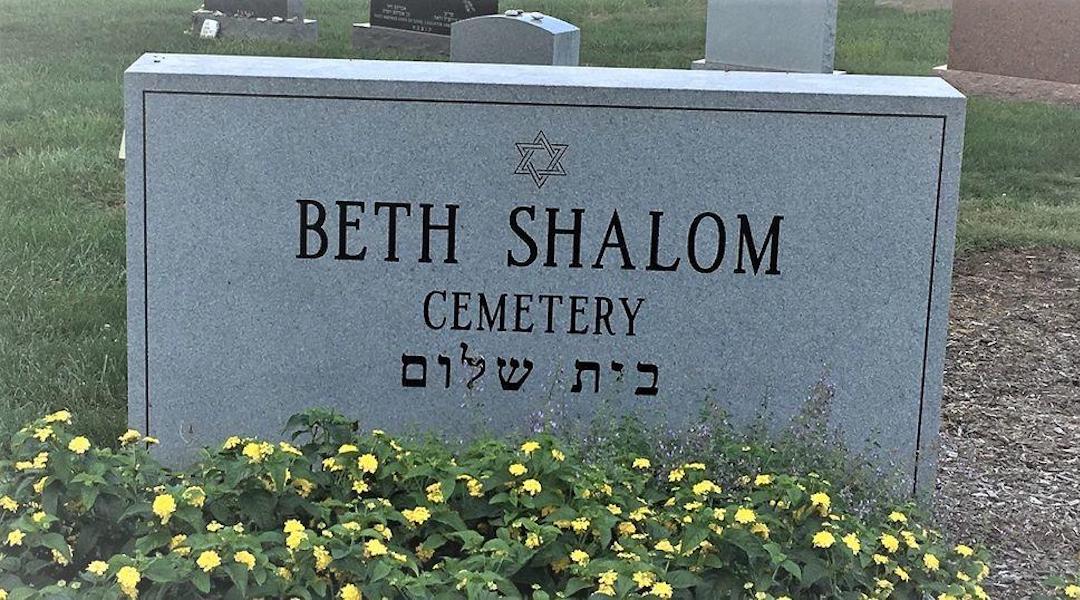 ST. LOUIS (St. Louis Jewish Light via JTA) — A Jewish cemetery in a suburb here has opened a section for the burial of cremated remains and will allow for the burial of non-Jewish, immediate family members of Jews who are buried at the cemetery.

The decision by the board governing Beth Shalom Cemetery in Chesterfield is an acknowledgement of two non-traditional trends in Jewish life: More Jews are ignoring the religious taboo against cremation and interfaith marriages have become more prevalent.

The cemetery is a separate entity located within the grounds and governed by the leadership of the Chesed Shel Emeth Cemetery, an Orthodox institution.

The change is an extension of another move toward inclusion: In 2001, Beth Shalom was created on the cemetery grounds to accommodate those who convert to Judaism under a non-Orthodox rabbi.

“We really look at trying to serve the community as a whole while still perpetuating the fact that Chesed Shel Emeth is an Orthodox cemetery,” Alan Simon, president of the cemetery board, said at the time. “I think everyone on the board has respect for that, yet we do realize that the majority of the community is not Orthodox, and we will do what we can to service it as a whole.”

The board decided to create the section, which opened March 1, “to better serve the entire greater Jewish community,” said Anita Feigenbaum, executive director of Chesed Shel Emeth. “The blended family and intermarriage have become very prevalent, and they need a place that will be inclusive.”

It also voted to accept cremations, which are allowed at local Conservative and Reform cemeteries but not at Orthodox burial grounds, including the neighboring Chesed Shel Emeth, because the practice is seen as a violation of Jewish law.

“It’s a trend that is no longer a trend but is part of the community,” Feigenbaum said. “By excluding them from Beth Shalom, you exclude the rest of the family as well.”

But the changes will be limited to only the new section, and the rules of the initial section of Beth Shalom will remain the same.

Simon, who is still the board president, said the cemetery had been receiving an increasing number of calls from people who were intermarried and looking to buy graves, or who have children who are intermarried and want to buy burial sites for them.

“They are afraid that maybe in the future their children will be intermarried and that they won’t be able to be buried close to where they want to be buried,” said Simon, who is also on the board of U. City Shul in St. Louis, an Orthodox synagogue.

The board did not vote unanimously in favor of the changes, with some members objecting to allowing cremations, Simon said.

“Cremations traditionally are not a Jewish thing,” said Simon, who served as director of Chesed Shel Emeth for eight years. “Some people felt very uncomfortable allowing cremations because they felt that perhaps this would encourage people to have cremations or identify cremations as a Jewish concept and really it’s not.

“It goes against my personal beliefs. However, I do realize that Beth Shalom is not an Orthodox cemetery, and the purpose of why it was started was to serve the community as a whole.”

Feigenbaum already has received inquiries about the new section. An interfaith couple visited last week to purchase a plot in the cemetery. She also received a call from someone whose mother had donated her body to Washington University for scientific research and now had her ashes.

“He was satisfied to know that we will accept her ashes for burial,” she said. “There is still a cost involved, so he hasn’t decided. He made his first inquiry. This is not an impulse-purchase situation.”

There has been a steady decline in the number of Jewish burials at cemeteries in St. Louis. From 1986 to 1990, there was an average of 529 burials each year at seven local Jewish cemeteries, according to data provided by the cemetery directors. From 2013 to 2017, the average was 377.

That decrease means cemetery associations have less money for upkeep of the grounds.

Could the creation of a new section help Beth Shalom’s financial situation?

“We will see,” Feigenbaum said. “The bylaws have been amended so that Beth Shalom Cemetery can do this from 7A [the new cemetery section] on. Depending on how the community responds to this, that will determine whether it will continue in future Beth Shalom sections. It depends on what the community needs.”