Only Jewish education can help bridge the Israel-Diaspora divide 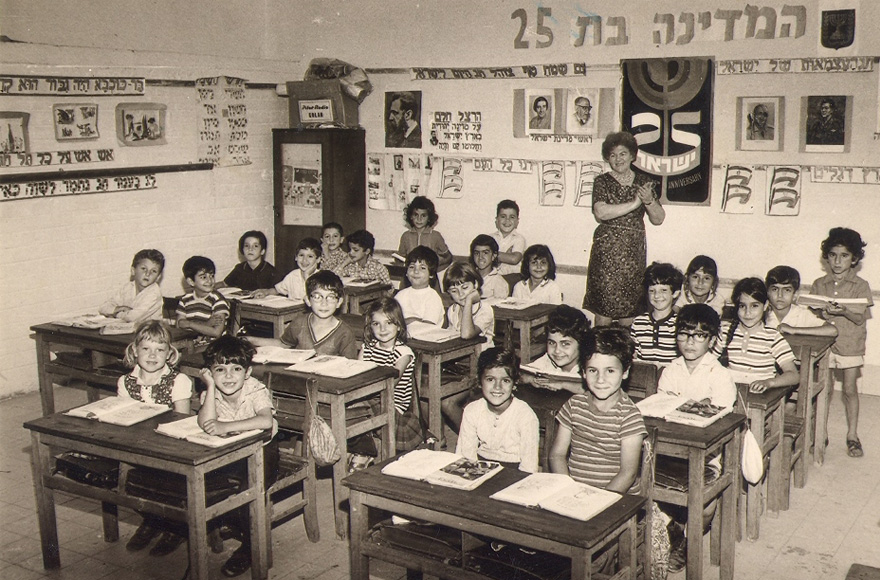 A first-grade classroom in the Vitkin School in Tel Aviv on Israeli Independence Day, 1973. (Wikimedia Commons)

MOSCOW (JTA) — Israel’s passage of the nation-state law brought another round of barrages across the Atlantic underlining the growing alienation of the world’s two largest Jewish communities. The issues are increasingly familiar: American pluralism versus Jewish exceptionalism, Orthodox versus Liberal, nationalism versus enlightenment.

Yes, we have a problem. Israel and American Jewry are growing apart from one other. It would be wrong to put the responsibility of this growing schism only on the Israeli government, or Israeli civil society, since Diaspora denominations have changed, too. The American Reform movement, for example, unilaterally introduced patrilineal descent, redefining Jewishness.

These tensions were aired in Ronald Lauder’s recent op-ed in The New York Times, in which the president of the World Jewish Congress argued that the nation-state law betrayed Israel’s universalist values and that the country’s religious establishment was alienating non-Orthodox Jews in the Diaspora. Reading between the lines, I sensed the anguish of a father and grandfather who sees his children distancing themselves from their people and ancestral homeland.

Naftali Bennett, Israel’s education and Diaspora minister, responded to Lauder’s op-ed with one of his own in the same newspaper, pushing back in defense of Israel’s right to pass such laws. Bennett seems uninterested in bettering relations with the Diaspora — in direct contradiction to his title and portfolio. He did not understand that the main question posed by Lauder was not “who is right and who is wrong,” but what can we do to minimize the divide between Israel and American Jewry.

As American Jews are grappling with the direction their country is taking, and struggling to identify with a non-utopian Israel, the search for fresh waters from the well of our Jewish sources is called for.

Liberal Diaspora denominations count fewer followers in the U.S., and the Jews there are being assimilated into an increasingly secular country. The empty synagogues will have to be replaced with the classrooms of Jewish schools. The challenge of giving over 1 million Jewish children a minimal Jewish education can and should be tackled if the government of Israel will take a lead and major Jewish philanthropists will join.

In the beginning of the 1990s, when the Jewish Zionist establishment vehemently opposed the idea of establishing schools in the former Soviet Union, Lauder was among the first to understand that Jewish continuity, especially in the secularized post-Soviet countries, can only be guaranteed by formal Jewish education. The establishment of two dozen schools in Eastern and Central Europe in the beginning of the ’90s by the Ronald S. Lauder Foundation guaranteed a positive Jewish identity for tens of thousands of children of Jewish families.

(Full disclosure: My wife, Dara, is the head of the Lauder Etz Chaim School in Moscow, the largest Jewish day school in the former Soviet Union with currently almost 600 children.)

Having the honor to meet and speak to many of the thousands of graduates of our schools in Moscow, I can attest to the impact on the identity and personal commitment to the Jewish cause of the students of the Lauder school. These children’s lives are forever changed.

What Lauder has achieved in Central and Eastern Europe should be applied now in the United States, where the continuity of the largest community outside of Israel is in danger.

Communities such as the United Kingdom, Australia and France have achieved great strides in recent years toward this goal. The great majority of their children receive a formal Jewish education; there is no reason why this should not be attainable in the U.S.

Every Diaspora Jew is the carrier of dual identities — the national one and the Jewish one — trying to juggle and reconcile and build a symbiosis. Trying to strike the balance between enlightenment and tradition has not been easy.

Harvard psychologist Steven Pinker, in his latest book “Enlightenment Now,” argued that the Enlightenment improved humanity by replacing “dogma, tradition and authority with reason, debate and institutions of truth-seeking.” Yoram Hazony of The Herzl Institute, in a response to Pinker, said that if the response of the Jews to the Enlightenment had been absolute, then the Zionist movement — which drew its passion and strength from the vast sources of Jewish tradition and history — would never have been born and we wouldn’t have had a Jewish state today.

(Pinchas Goldschmidt has been the chief rabbi of Moscow since 1993, serving at the Moscow Choral Synagogue and since 2011 as president of the Conference of European Rabbis.