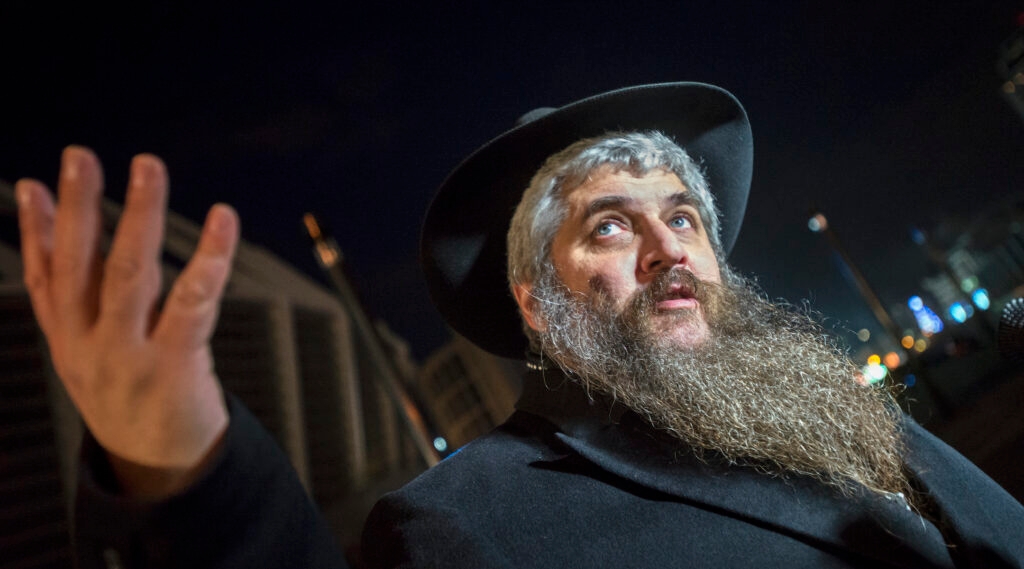 Following the storming of the U.S. Capitol by Trump supporters, Azman, a Hasidic rabbi who is one of several figures claiming to be the chief rabbi of Ukraine, posted on Facebook that the “Maidan has begun in the USA,” referring to the widespread protests that led to the ouster of pro-Russia President Viktor Yanukovych in 2014. “The people protesting against mass election fraud broke into the capital. God bless America.”

Yaakov Dov Bleich, who also is a chief rabbi of Ukraine and the only one recognized as such by the World Jewish Congress and the European Jewish Congress, distanced himself from Azman’s words.

“Rabbi Azman is voicing his own opinion,” Bleich said. “I don’t think Ukrainian Jewry has or should have a stand on U.S. politics.”

In May 2019, Azman was photographed in Paris smoking cigars with Rudy Giuliani, President Donald Trump’s personal attorney, fueling speculation among some in Kyiv that the president’s representative and his colleagues were using the rabbi to provide cover for illicit Ukrainian lobbying activities.

The Giuliani-Azman meeting seemed to have been arranged by Lev Parnas and Igor Fruman, two Jewish Giuliani associates who have been linked to those lobbying efforts.

Trump was impeached in December 2019 after it emerged that he had pressed his Ukrainian counterpart, President Volodymyr Zelensky, to investigate Biden and his son Hunter during a phone call five months earlier between the two leaders. During the call, Trump asked Zelensky, who is Jewish, to look into allegations that Hunter Biden had engaged in illegal behavior while serving on the board of a Ukrainian firm that was being probed for corruption. The Senate acquitted Trump in February.

According to the Organized Crime and Corruption Reporting Project, an international journalism network that tries to uncover political corruption, Giuliani was slated to deliver a paid speech at a fundraiser for Azman’s Anatevka project in May 2019. Anatevka — named for the shtetl in “Fiddler on the Roof”— is a gated compound outside of Kyiv housing Jews who were displaced by the war in eastern Ukraine.

Parnas and Fruman, who sit on the board of the American Friends of Anatevka, would have met with Zelensky “on the sidelines” of the Anatevka Project event, the report said. But Giuliani canceled his trip due to intense public scrutiny and the meeting never happened.

Instead he flew to Paris, where he attended a number of meetings — brokered by Parnas and Fruman — with senior Ukrainian figures. He also sat with Azman for two hours.

Azman, a staunch Trump supporter, presented Giuliani with a giant novelty key declaring him “honorary mayor of Anatevka.” Azman had previously told the Ukrainian news outlet Hromadske that he prays for Trump “every Saturday” because of the president’s support for Israel.

At least one person was shot during Wednesday’s violence, which saw lawmakers evacuated from the Capitol building, and several people have been reported hospitalized, including at least one member of law enforcement. Dozens of lawmakers, from the House and Senate, were contesting the results of November’s election that Trump has fraudulently claimed was stolen on behalf of Biden.

Bleich rejected any comparisons between what happened in Ukraine in 2013-14 and Wednesday’s events.

“The United States of America is a strong democracy with many checks and balances, there is no basis for comparing it to Maidan,” Bleich said. “Many people are upset about the elections, including myself,” he added, and in his view “it looks like Trump won the elections and the Democrats stole it.”

This opinion is “causing frustration and is making a lot of people, including Rabbi Azman, emotional, but there is no place for violence,” Bleich said.

Azman’s claim to the title of chief rabbi is disputed, including by the World Jewish Congress, which in 2005 said in a statement that Azman’s title was not endorsed “by any rabbinical authorities.”