On Sunday, the rabbi moved to Florida’s Panhandle. On Wednesday, Hurricane Michael hit. 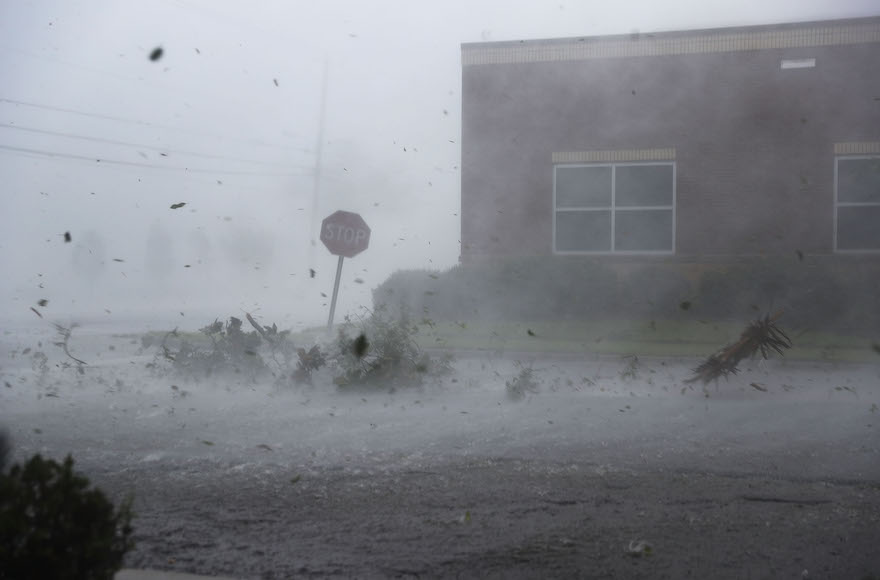 (JTA) — When he and his wife moved to Pensacola, Florida, on Sunday afternoon, Rabbi Mendel Danow expected to spend the following couple of weeks settling in and buying supplies for their new home.

Instead, two days after getting off the plane, Danow found himself driving to a Walmart in Alabama to buy five 40-packs of water bottles. By Wednesday, the windows and doors of his new home were being covered by metal plates provided by their landlord. And instead of spending their first week in Pensacola alone in their new and mostly empty house, the rabbi Danow and his wife, Nechama, cooked up a stockpile of rice and pasta — and prepared to host 10 overnight guests.

The Danows, who were married this year, had planned to move to Pensacola this week to begin a life as emissaries of the Chabad-Lubavitch Hasidic movement. They landed in the path of Hurricane Michael, an ominous Category 4 storm that hit the Florida Panhandle on Wednesday.

As Danow spoke to JTA by phone on Wednesday afternoon, he said trees already were swaying in the rain.

Hurricane Michael made landfall on Wednesday near Mexico Beach, Florida, roughly 100 miles west of the state capital of Tallahassee, and about 120 miles east of Pensacola, which is on the Alabama border. Maximum wind speeds topped 150 miles per hour. The storm is being called the worst the area has seen in a century.

In Tallahassee, which is further inland, Jewish leaders sounded relatively calm. Both the Reform and Conservative synagogues secured their Torah scrolls, but both expect to be open this weekend for Shabbat services. The Reform congregation, Temple Israel, is set to celebrate a bar mitzvah — of a boy named Michael.

“One way or another we will have Shabbat services this weekend,” Stefanie Posner, the synagogue’s education and music director, wrote JTA in a message Wednesday. “Even if there’s no electricity we’ll make something happen. What’s nicer than a Kabbalat Shabbat service by candlelight.”

Tallahassee Jewish Federation President Ellie Simon told JTA that local Jews, including students at Florida State University, which has a sizable Jewish population, appeared to be secure as of Wednesday afternoon. Before Hurricane Michael, the federation had been raising money for victims of Hurricane Florence, which hit the Southeast last month.

“I want to make sure the other areas of the southeastern part of the country that are on the coast have not suffered too badly, and that there has been no damage to human life,” she said. “I feel very lucky right now that I am inland.”

Mark Goldman, a past president of the local Jewish federation and Congregation Shomrei Torah, a Conservative synagogue, said most people in Tallahassee are staying put. While he said hurricanes may be becoming more frequent, he has no intention of moving away from the area.

“We’ve been through hurricanes before, but nothing of this magnitude in terms of potential damage,” he said.

But, Goldman added, “Most people feel like they’re OK. Unless you live in a low-lying area, a floodplain up on the coast, I feel like people’s houses are pretty decent. We’ll get through it.”

Danow, who grew up in Sweden, has no prior hurricane experience for comparison. He and his wife came to Pensacola after Danow had visited as part of a Chabad program. They hope to serve both the small local Jewish community and Jewish students at the University of West Florida.

Besides providing for their own needs, the Danows have checked in with local Jews they have already met ranging from seniors to young Israeli singles. Another Chabad family that evacuated from the nearby coastal town of Destin will be staying at their house.

The couple, three days after moving, does not have much furniture. But they do have sleeping bags, carpeted floors, a folding table, and crayons and paper for kids. And lots of food.

“We’re preparing over here at home, cooking up [food] to have ready to get out to people during and after the storm,” Danow said. “Maybe it won’t be hot, but at least it will be fresh and edible.”