On a day of remembrance, Chelsea soccer’s rising stars are shocked by what they see at Auschwitz

OSWIECIM, Poland (JTA) — On his first visit to the Auschwitz memorial museum, 17-year-old Armando Broja already knew a fair amount about the Holocaust.

The Jewish genocide is taught in schools in his native United Kingdom, and a spate of anti-Semitic incidents at sports matches across Europe in recent years has made it the subject of constant discussion in the world of professional soccer — Broja is a rising prospect with the under-18 division of the Chelsea club.

But that didn’t prepare him for the piles of human hair that he and five other Chelsea players encountered at the museum Thursday, which also was the day that Jews observe as Holocaust Remembrance Day. The Nazis sheared the heads of women, using their hair as pillow stuffing and pipe insulation, before their executions.

“The room with all the ladies’ hair, it really touched me,” Broja said outside the famous exhibit, which included many long braids of various shades. “It shows you how much, how much they, like, tortured the ladies and what they did to them.”

The players toured as part of Chelsea’s second consecutive delegation to the annual March of the Living — an event that has brought some 300,000 marchers to Auschwitz since it began in 1988. Players from the New England Revolution of Major League Soccer in the United States also participated in the march, which is held on Israel’s national day of mourning for the Holocaust. 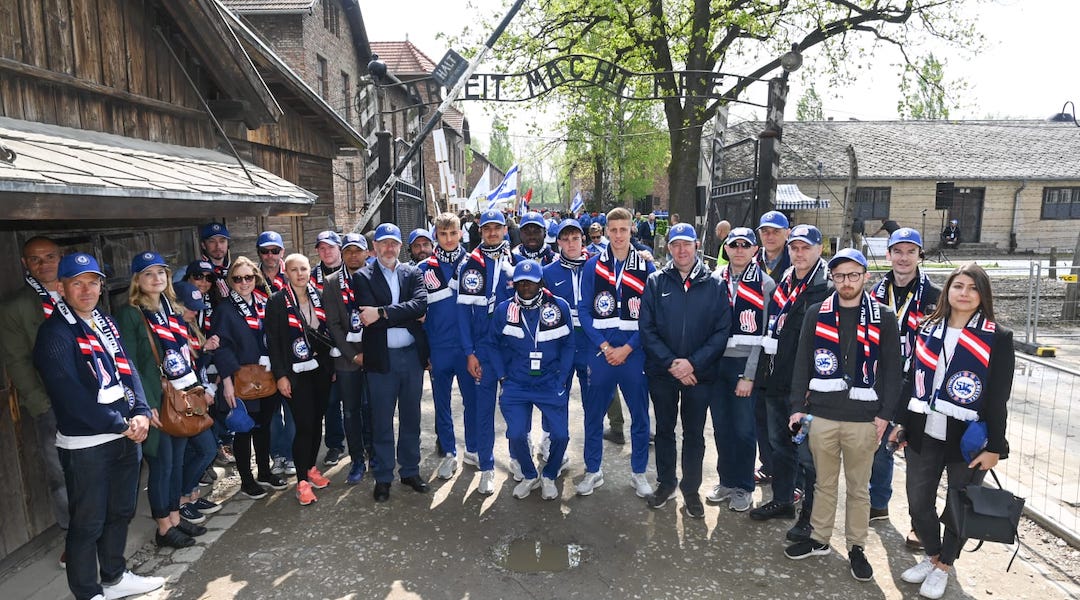 Players from the New England Revolution MLS team join the Chelsea players at Auschwitz, May 2, 2019. (Courtesy of March of the Living)

The visits and march underline how educators are increasingly turning to Auschwitz and other tangible objects and places connected to the Holocaust as aids for teaching tolerance and the dangers of racism in a world where Holocaust survivors and other witnesses are dying out.

Their shock was just the reaction that Chelsea was hoping to achieve by bringing its promising young talents here, according to Guy Laurence, the London club’s chief executive.

“Only when you come here you see the full horror,” said Laurence, who is not Jewish.

But the objectives of Chelsea’s participation since last year’s march go beyond educating merely its players.

“Anti-Semitism is on the rise today in Europe and beyond, and we feel we have a role to play in suppressing it, trying to eradicate it by making sure that not just our players understand what’s going on but that the wider public is, as well,” Laurence said.

Given soccer’s enormous role in British society, it’s not an unrealistic goal, said Clive Lawton, a founder of the Limmud festival of Jewish learning and a longtime participant in March of the Living.

“The popular power of the crowd in football is much greater than in other celebrity environments,” making players able to “go right to the heart of a whole community of ordinary people,” he said. Soccer is known as football in Europe and around the world.

Soccer communities in the U.K. and throughout Europe have had a dismal record on racism. In the 1970s and ’80s, fans would throw banana peels onto the pitch and make monkey sounds to insult black players, Lawton said. But that phenomenon has died down amid criticism.

“Now the anti-Semitic theme seems to be growing and taking the place of the anti-black one,” Lawton said. “Holocaust jibes are being heard particularly on the Chelsea terraces. Not only there but you’re very likely to hear them from Chelsea supporters.”

Chelsea fans often emit hissing sounds when their team faces the Tottenham Hotspur, who their own supporters and rivals view as being Jewish for historical reasons.

“There seems to be a perception, which I think is probably right, that soccer matches are fertile ground to do racist recruiting” by far-right groups, Lawton said.

Chelsea players visiting Auschwitz is “a good development,” he said, “but it remains to be seen if they succeed or even make an effort to address the problem.”

Laurence, the Chelsea executive, rejected the notion that his team or the soccer world in generally has any inherent racism problem. Chelsea, he suggested, was part of the solution rather than the problem.

In January 2018, the club partnered with the World Jewish Congress for a campaign titled “Say No to Antisemitism” to educate its players, staff, fans and the wider community about anti-Semitism in soccer.

“You have to remember that a club like Chelsea has millions of supporters who cover a full cross-section of society, and unfortunately there are elements of that society that hold racist and anti-Semitic views,” Laurence said.

The reason Chelsea feels “a responsibility to speak out,” he said, is that the fans “do listen.”