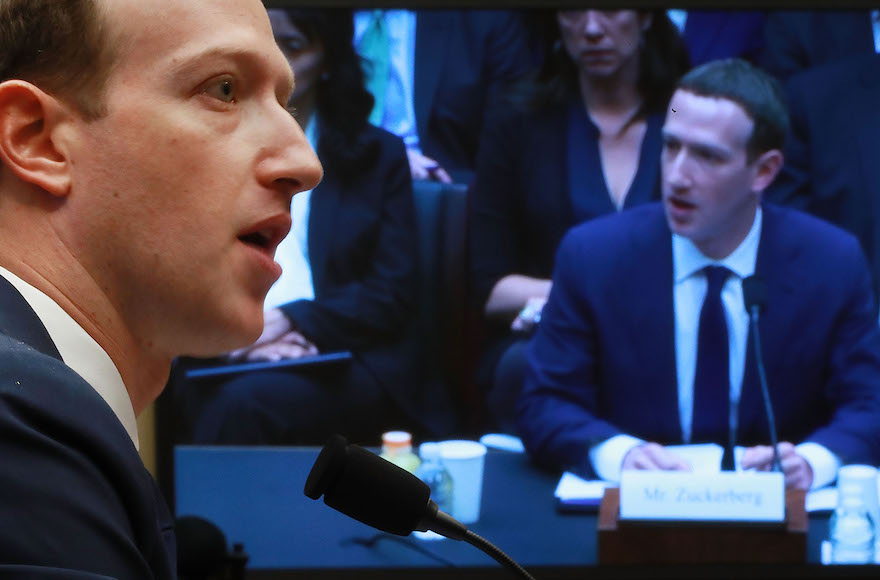 (JTA) — “Look who’s showing me the dirty pictures!” is the punchline to a great psychiatry joke about a patient who can’t stop thinking about sex.

We at JTA don’t think everything is about the Jews, but there is a strong Jewish thread — really, three threads — in the big New York Times investigation of Facebook. Wednesday’s story examined how Facebook struggled to fend off criticism over its role in the 2016 elections, its sharing of fake news from Russia and its oversharing of privacy data.

Dueling charges of anti-Semitism are part of the story, which has already led Facebook to fire a PR firm associated with its aggressive efforts at reputation repair. In a nutshell: Facebook complained that some of its critics were using conspiratorial anti-Semitic imagery even as it hired a firm that went after George Soros, who is frequently the target of conspiratorial anti-Semitic imagery that is sometimes spread on Facebook.

And Chuck Schumer puts in an appearance.

According to The Times investigation, Mark Zuckerberg, Sheryl Sandberg and other Facebook execs knew early that bad actors were manipulating their social media site to spread disinformation during the elections. But instead of directly addressing the issues and coming fully clean, they fought back against its critics with “delays, denials and a full-bore campaign in Washington.”

Among those critics was a group called Freedom from Facebook, which showed up at a hearing of the House Judiciary Committee weighing complaints against the company. As a Facebook executive spoke, members of the group “held aloft signs depicting Sandberg and Zuckerberg, who are both Jewish, as two heads of an octopus stretching around the globe.”

The Times reports that a Facebook official “quickly called the Anti-Defamation League” to complain that the imagery was anti-Semitic. That afternoon, ADL tweeted a warning that “[d]epicting Jews as an octopus encircling the globe is a classic anti-Semitic trope,”adding: “Protest Facebook — or anyone — all you want, but pick a different image.”

The Times notes that the criticism “was soon echoed in conservative outlets,” which also tried to link Freedom from Facebook to what one publication called “extreme anti-Israel groups.”

An ADL spokeswoman said the tweet was routine, and The Times says that while ADL and Facebook have teamed up in the past to fight online hate, ADL at times has also been sharply critical of the company. In a tweet Wednesday, Nick Confessore, one of The Times reporters on the story, reinforced that ADL’s tweet “was consistent with past warnings that ADL has made against employing similar imagery in other contexts.”

Some of the juiciest bits in The Times expose involve Facebook’s decision to hire Definers Public Affairs, a Republican-led firm that uses political campaign-style tactics to help companies with a PR problem. Among its efforts on Facebook’s behalf was a research document blaming the liberal philanthropist George Soros with funding Facebook’s critics, directly and indirectly.

The Times acknowledges that Soros was a “natural target”: He has been critical of Facebook. Definers urged reporters to probe connections between Soros and groups that were members of Freedom from Facebook.

Soros, of course, has also been cast as a villain in a web of conspiracies concocted by the right and far right. The ADL, among others, has noted that many of these conspiracies traffic in classic anti-Semitic themes about world domination (Soros himself has been depicted as an octopus in social media, and an alleged right-wing fanatic has been charged with sending a homemade bomb to his home).

On Thursday, Soros’ Open Society Foundations leveled the anti-Semitism charge explicitly. In a letter to Sandberg, its president wrote, “I was shocked to learn from the New York Times that you and your colleagues at Facebook hired a Republican opposition research firm to stir up animus toward George Soros. As you know, there is a concerted right-wing effort the world over to demonize Mr. Soros and his foundations, which I lead — an effort which has contributed to death threats and the delivery of a pipe bomb to Mr. Soros’ home. You are no doubt also aware that much of this hateful and blatantly false and Anti-Semitic information is spread via Facebook.”

Definers defended its oppo research on Soros, saying all of its work is “entirely factual and based on public records.”

Nevertheless, Facebook must have decided, among things, that identifying itself with an effort to discredit a public figure who too often is depicted as the head of a worldwide Jewish conspiracy (on their own site, no less) was not a good look.

On Thursday, the social media giant said it had ended its relationship with Definers.

Picture 3: Chuck Schumer for the defense

Among the friendly politicians whom Facebook turned to for help was Sen. Chuck Schumer, D-N.Y., who in 2016 “raised more money from Facebook employees than any other member of Congress,” The Times reports. Schumer also has a personal connection to the company: His daughter works at its New York office.

In July, a Facebook employee told The Times, Schumer confronted Sen. Mark Warner, D-Va., a Facebook critic and author of legislation to regulate the company and other big tech firms. “Back off,” Schumer told Warner, according to The Times account.