Nikki Fried, a former marijuana lobbyist with an office mezuzah, wants to be Florida’s first woman governor. She’s ready for a rough fight.

(JTA) — Before a news conference in May, Florida Agriculture Commissioner Nikki Fried stepped out from behind the podium outside her Tallahassee office to show off her shoes.

“I’m in sort of heels — wedges,” she said, kicking back an ankle.

Then she proceeded to call Gov. Ron DeSantis, who had just signed voting rights restrictions into law, “an authoritarian dictator who is borderline fascism.” Fried was speaking in her official capacity, at a podium emblazoned with her office’s crest, a riot of green and yellow depicting crops running up to a farmer herding cows by the seashore.

“Today he took away our rights to vote,” she said. “I am outraged. You should be outraged.”

Fried, a self-described “good Jewish girl from Miami” who can also mudsling with the best of them, is running to replace the Republican DeSantis in next year’s statewide elections. DeSantis, who has his eyes on a 2024 presidential run and is not afraid to plant his flags firmly in the middle of the culture war battlefield — see his threat last week to fine school districts that impose mask mandates or his sharp rebuke to President Joe Biden just this week — makes the matchup a prime test of the Trump doctrine and a chance for Fried to grab a national profile.

The campaign would also pit two of the state’s archetypes against one another: a gregarious Miami-raised Jewish liberal who reviles the state’s most famous resident (Donald Trump) and a Roman Catholic from Florida’s deeply conservative north who is one of the former president’s closest acolytes.

Fried would be the state’s first woman governor — she frequently enthuses that her election would “break the ultimate glass ceiling” — and its second Jewish governor since the New Deal era. A lawyer and former marijuana industry lobbyist, she is the first Jewish woman in a Florida Cabinet, and one of the state’s four top executives (along with DeSantis, Attorney General Ashley Moody and Chief Financial Officer Jimmy Patronis.) Fried is the only Democrat.

But first she will have to win what will likely be a tight Democratic primary against Charlie Crist, a former Florida governor and current House rep for the state’s 13th District in the central part of the state. A poll from this week found that if Crist were the nominee, he would  eke out a narrow victory over DeSantis, while Fried would barely lose. She says Crist’s run is reckless considering how narrow the Democratic majority is in the U.S. House of Representatives, and that his seat could swing to the GOP.

After the party fight Fried, who squeaked into office in 2018’s razor-close statewide election, would face a tough general election in a 50-50 state she says Republicans have controlled for decades through corrupt means.

“We have a one-party system, and that one-party system has suppressed votes, has destroyed our economy for working-class individuals, has done everything in their power to attain power,” Fried said in an interview with the Jewish Telegraphic Agency.

But Fried is up for the tussle. Her 10th birthday wish was a visit to the White House, and she ran and became her middle school’s vice mayor with the slogan “You have a friend in Fried.” She earned a master’s degree in political campaigning at the University of Florida before attending its law school, where she joined Blue Key, a century-old honor society that has launched a hefty portion of the state’s elected leaders.

She started in corporate law and soon grew heartily sick of it, becoming a public defender. In 2016, Fried opened a lobbyist shop, and though she was not well known she soon secured top clients, including the state’s marijuana industry. It was a timely get, as voters in a referendum that year overwhelmingly favored legalizing medical marijuana. She gave money to both Democrats and Republicans, including Moody, the attorney general who has been friends with Fried since their university days.

Fried cultivated the state’s Democratic establishment ahead of her 2018 run, surprising better-known candidates to win the nomination and then the election. She is close to high-profile Florida Jews of her generation, including Jared Moscowitz, who until April was the state’s emergency management director and earned bipartisan kudos for how he handled the pandemic, and Fred Guttenberg, the gun control activist whose daughter Jaime was murdered at the massacre at a Parkland high school in 2018.

Fried has been quite literally in DeSantis’ face since assuming office in 2019. One of her first acts was to slap a photo of her face (smiling, naturally) on gas pump inspection stickers, which none of her predecessors had done. (One of her office’s responsibilities is energy policy.) DeSantis was livid, and within a year the GOP-led legislature approved measures making her replace the stickers. 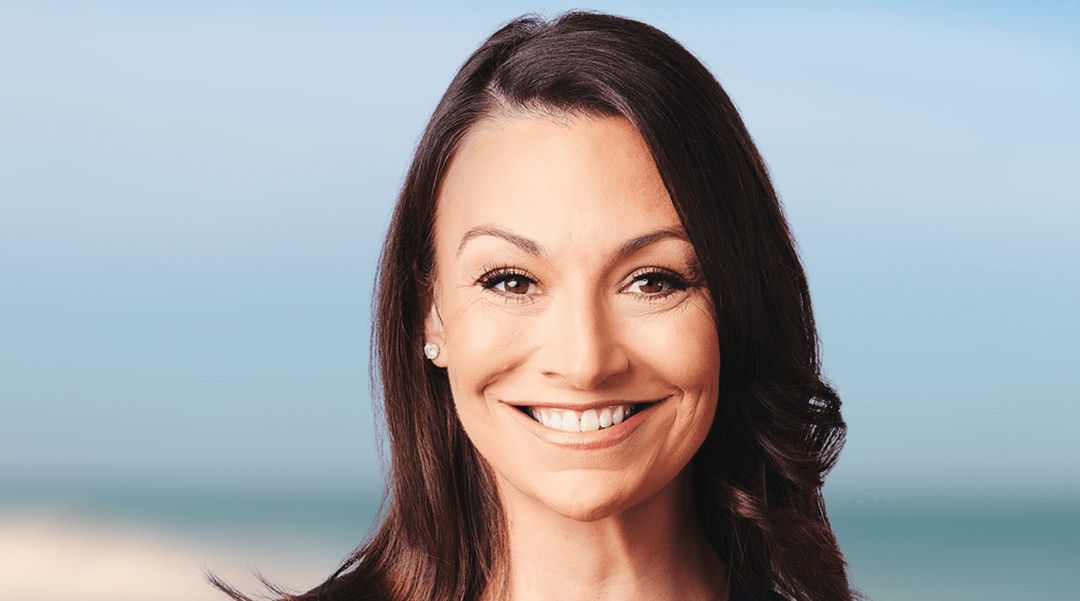 DeSantis, who refused to meet one on one with Fried for at least 14 months. makes plain his contempt for her. The day after she formally declared for governor, June 1, he lashed out at reporters who asked him for comment.

“Nikki Fried has done nothing in office, she does nothing,” DeSantis said. “She spent millions of dollars to put her face on every gas pump across this state purely to boost her own image at your expense as a taxpayer.” (Fact check: The stickers cost $5,027.16, $5.16 more than did her predecessor’s, sans punim.)

“I think we struck a nerve with @GovRonDeSantis,” Fried said on Twitter.

Conservatives accuse Fried of using her powers to undercut the conservative agenda embraced by the rest of the state’s leadership. For example Fried, who ran on a gun control platform, slowed down concealed weapons licenses for part of the pandemic, blaming restrictions on obtaining the necessary fingerprints. That triggered a lawsuit by gun rights advocates.

DeSantis and Fried do have their similarities: He is 42, she is 43, and both are lawyers. Fried was the student body president at the University of Florida law school and DeSantis went to Yale and then Harvard law school.

They are also both fending off potential fundraising scandals. DeSantis has been dinged by the Federal Election Commission for taking more than $100,000 from a donor who appears to be concealing the money’s true origins. Fried meantime faces questions about her ties to the marijuana industry, including through her medical marijuana entrepreneur fiance, Jake Bergmann. She dismissed the concerns to JTA, noting that she does not regulate the marijuana industry — that’s the province of the state Department of Health.

(Bergmann, meantime, could be a wild card: His relationship with Fried started while he was still married, and last year she fired three aides who told her they believed Bergmann was abusing her. Police filed a report after an incident but no charges.)

Fried said she ran on her record as a marijuana lobbyist, which she believes gave her an edge.

“The people of our state knew that I was a lobbyist for the marijuana industry well before I ran in 2018, and they thought that was a positive, that I understood the industry and was going to fight for its expansion,” she said.

Democrats, when they win in Florida, rally the state’s array of minorities and nibble at the Republican base by playing up economic disparity in a state that couples ostentatious wealth and the depths of poverty. It can work: DeSantis went into the election thinking he was a shoo-in, but former Tallahassee Mayor Andrew Gillum — whose primary win was seen as a fluke — came within a hair’s breadth of becoming governor.

It’s a strategy Fried has understood since she launched her campaign on June 1.

“Ron DeSantis has Fox News, but we have everyone else,” she tweeted.

In the first seven minutes of her first Facebook Live campaign event, on June 11, she checked off Black philosopher Cornel West (that’s his textbook, “Race Matters,” on the bookshelf behind her); her bat mitzvah (her theme was “Nik at Night,” a play on the Nickelodeon programming); her dad (a “diehard Republican”); the hub of Hispanic life in South Florida, Little Havana (“I was down in Miami in Calle Ocho a couple of weeks ago playing dominoes”); cannabis (more books on her shelf); and lighting up Florida bridges for Pride Day (the DeSantis administration nixed the lightings).

Fried told JTA that she plans to win the way she has endeared herself with the state’s farmers, opening county fairs, claiming a passion for country music and cheering the Gators, her alma mater’s football team. It’s a constituency that is just about everything she is not: white, male, older and Republican.

“When I first got elected, the main question was ‘How did a good Jewish girl from Miami become Florida’s commissioner of agriculture?’” she said. “And so we spent a significant amount of time my first year ingratiating ourselves with the Ag community that had been historically white older men of the Republican Party, and spending a lot of time showing them I will be a fierce fighter for them.”

Fried is an avid advocate of trade protections, lobbying in Washington recently against what she depicts as a flood of Mexican produce farmed by low-wage workers.

Gillum’s razor-thin loss, just over 30,000 votes, might be attributed in part to concerns about his Israel posture — there are 600,000 Jews in the state. During his campaign, Gillum criticized Israel’s treatment of the Palestinians and accepted money from a group that backs the Boycott, Divestment and Sanctions movement against Israel. Under attack from DeSantis, he was forced to reject BDS.

(Jews, not surprisingly, figured more than once in campaigning: In a notable debate moment, Gillum left DeSantis sputtering after he tied antisemitic and racist robocalls to DeSantis.)

Fried has made clear she is not about to give ground on Israel or any other Jewish issue. She posted a mezuzah on the door jamb of her office and said she was not worried about any potential pushback from the American Civil Liberties Union, which complained in 2007 when Crist, then a Republican and the state’s governor, who is not Jewish, did the same.

“Having a mezuzah on the doors shows, again, my commitment to my religion, my faith and protecting the ‘home’ in which we live today,” she told the Florida Politics website.

Fried was sworn in on one of the first printed Hebrew Bibles in the United States, which she borrowed from her alma mater, the University of Florida.

When DeSantis organized a trip to Israel in 2019 — the Cabinet met in May at the U.S. Embassy in Jerusalem — Fried arrived a few days early to research advanced agricultural technology. She scored a political twofer: Complaining about U.S. backwardness on cannabis — “They’ve been researching medical marijuana for 20 years and we can’t even start because it is illegal in the U.S.” — and claiming the pro-Israel high ground. Fried speaks with Cody Lastinger, left, and Jeff Kreiger at Corkscrew Grove in Estero, Fla., June 13, 2019. Fried toured orange groves that are dying from citrus greening that could potentially be replaced with hemp plants. (Scott McIntyre/For The Washington Post via Getty Images)

“When I started to see recently there was a partisan divide, I felt as the leading Democrat in the state of Florida as a swing state, as one of the largest Jewish populations in our state, it was my obligation to stand up and say ‘We are here. I am supporting Israel. I am supporting the American-Israeli relationship,” she told Florida newspapers.

Fried listed her bona fides to JTA, including her leadership in BBYO (she still gives back to the youth group), her many trips to Israel and her attendance at AIPAC policy conferences — but she also emphasized that she did not need to list her bona fides.

Despite that, Fried said she’s ready for a rough campaign.

“Their job is to attack us,” she said of Republicans. “But if we’ve learned anything in the last two years it’s that anytime they attack us, we turn it into a strength.”