New York’s ‘Snowvember’ and the kindness of friends and strangers 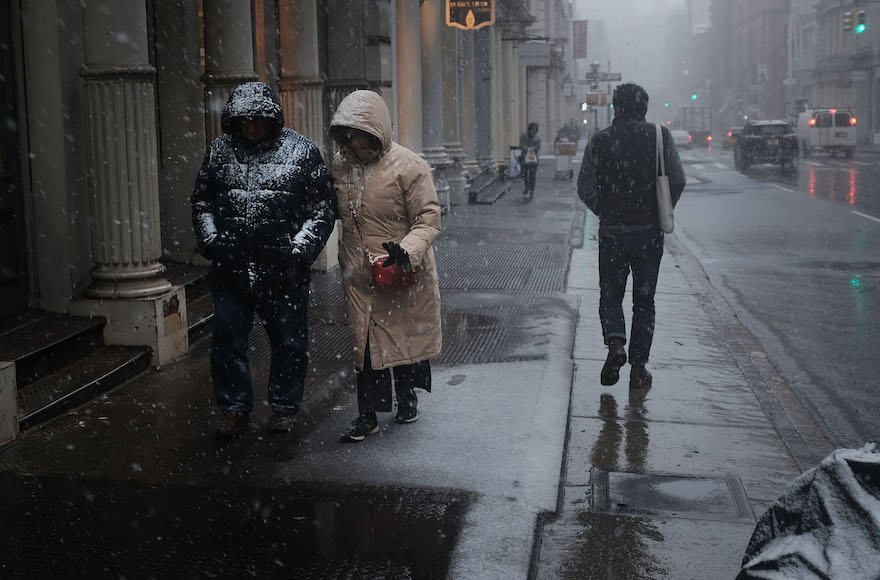 (JTA) — I don’t mean to get mushy about what for tens of thousands of people was a miserable night — and certainly won’t complain about an ugly snowstorm when dozens have died in California wildfires — but Thursday night’s “Snowvember” taught me a lot about the kindness of friends and strangers and the strength of Jewish community.

In case you don’t happen to live in the center of the universe, a recap: New York City and environs were expecting the first snow of the season Thursday afternoon. The predictions were for two to three inches, with sloppy but manageable conditions around the evening rush hour.

Instead, four to six inches fell, along with sleet, freezing rain and I think at one point a dusting of frogs and locusts. Trees fell and blocked side streets in Lower Manhattan, above-ground trains stalled, cars sat for hours in traffic.

I arrived at the Port Authority Bus Terminal around 5:30 p.m. to find a scene out of a zombie movie, and we were the zombies. Buses weren’t coming or going, and the top floors of the terminal, which on a good day have the charm and freedom of movement of the Chicago Stock Yards, were closed. Everyone bound for New Jersey and points north and west crushed into the ground floor, spilled out onto Eighth Avenue and queued all the way to Seventh Avenue in hopes that a bus would arrive.

I felt moving — anywhere — was better than being crushed to death between an accountant from Cresskill and an actuary from Monsey, so I hopped on a subway headed uptown for the other Port Authority Bus Terminal, at the foot of the George Washington Bridge.

Happily I ran into a friend and fellow congregant who had a few things I didn’t, namely a, a plan; b, some cash, since I rarely carry any; and c, a fully charged cellphone. (By the way, if the preceding confession doesn’t result in my wife divorcing me, nothing will.) Together we made it uptown, where we met her husband and a few other people from our synagogue.

Unfortunately the buses weren’t running from that terminal either, so I heartily seconded the suggestion that we walk across the bridge. Once on the Jersey side we could always — what? I hadn’t really thought that far, but figured moving was better than being crushed to death between a garment worker from Hackensack and an administrative assistant from Fort Lee.

It was kind of exhilarating to be hiking though the snow on a bridge clogged with cars and trucks. The bridge has a walkway that I have sometimes biked on a sunny Sunday. That night the snow and fog were so heavy you couldn’t even see the skyline, but there was a lot camaraderie among the dozens and dozens of others making the trudge. As you learn time and again in New York, common disasters have a way of bonding people who on a normal day pass each other without a word or smile.

Our gaggle, a few shy of a minyan, met up on the other side of the span. A few of us tried Uber (endless waits, high but not outrageous surcharges), and decided to wait it out in the lobby of a nearby office building. The Uber cars seemed lost in a space-time continuum, or perhaps on the New Jersey Turnpike. A friend called her husband, who sloshed and skidded the five miles from our town.

We made it home, slowly, slowly. The Turnpike was a mess of idling tractor-trailers and the odd bus that appeared to have skidded across a few lanes.

The rest of the night Facebook lit up with similar tales of horrendous commutes. Friends stuck in tunnels. Fifteen-mile drives that took five hours.

A few thoughts on “Snowvember”:

So to the friends who banded together and got us all home safely, I can hardly express my gratitude. To my friends and colleagues who commuted Thursday, I am glad you made it in one piece.

And to the stranger who let me know I had dropped my MetroCard at the 42nd Street station, many thanks. You were one link in a chain that gave me faith in the city — even if it often doesn’t deserve it.

The post New York’s ‘Snowvember’ and the kindness of friends and strangers appeared first on Jewish Telegraphic Agency.