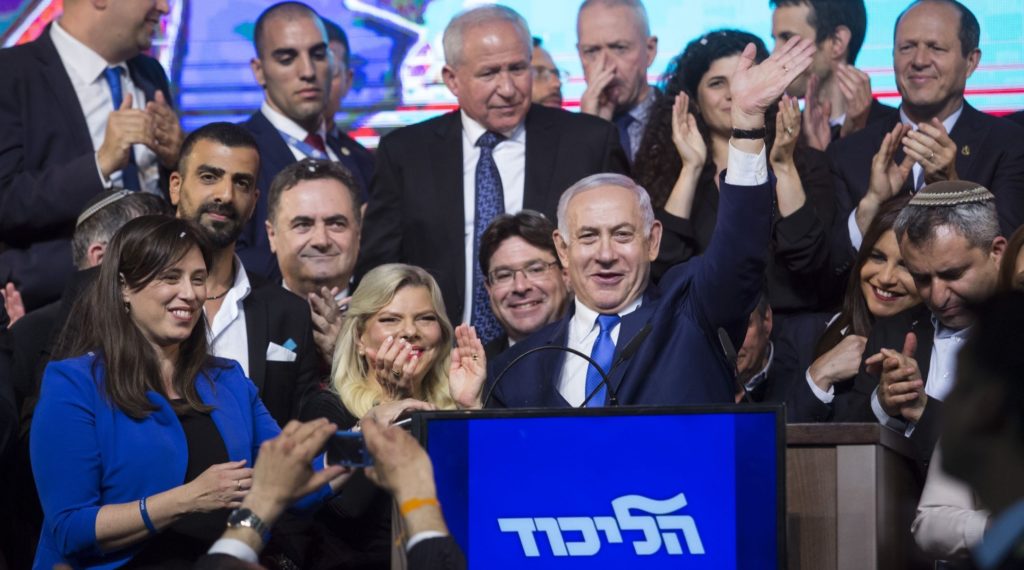 WASHINGTON (JTA) — Benjamin Netanyahu’s re-election Tuesday as the prime minister of Israel brought to a boil the simmering divides among Republicans and Democrats over the longtime leader’s nation.

President Donald Trump, a Republican, celebrated the victory as a win for peace. Democrats suggested it would be an impediment.

“The fact that Bibi won, I think we’ll see some pretty good action in terms of peace,” a clearly pleased Trump told reporters waiting Wednesday to speak to him on the White House lawn before he flew to Texas. “Look, everyone said — and I never made it a promise — but everybody said you can’t have peace in the Middle East with Israel and the Palestinians. I think we have a chance. And I think we have, now, a better chance with Bibi having won.”

Trump spoke with Netanyahu’s victory assured, but not yet affirmed, and no leading Democrat had yet pronounced on the election. But as Israelis went to the polls, some Democrats made clear where their preferences lay — and they did not believe Netanyahu opened a path to peace.

“As votes are counted in Israel today, Netanyahu should know that his fear-mongering and alliance with the ultra-right, racist Otzma Yehudit party has not gone unnoticed,” Sen. Chris Van Hollen, D-Md., said in a tweet on the morning of the election. “True friends of Israel will stand against efforts to unilaterally annex the West Bank.”

Netanyahu brokered a vote-sharing agreement with Jewish Power, or Otzma Yehudit, a far-right party that has its roots in the racist teachings of the late Rabbi Meir Kahane.

That Van Hollen posted such thoughts on Twitter is significant: He comes from a state with a substantial Jewish population, and during his run for the Senate in 2016 went to great lengths to distinguish his pro-Israel record from that of his primary rival, Donna Edwards.

“After asking multiple times, @SecPompeo refused to tell me if the United States would oppose @Netanyahu’s plan to unilaterally annex all or large parts of the West Bank even though it would clearly sabotage any prospect for a two-state solution,” he said.

Netanyahu’s election-eve pledge to extend Israeli law to Jewish West Bank settlements is at the core of explicit Democratic distaste for Netanyahu. At least five Democratic presidential candidates spoke out against Netanyahu after he made the pledge over the weekend, including two seen as close to pro-Israel groups: Sen. Amy Klobuchar, D-Minn., and Pete Buttigieg, the mayor of South Bend, Indiana. Some of the same candidates also spoke out against Netanyahu’s alliance with Jewish Power.

Leading Democratic presidential candidates already known as unfriendly to Netanyahu or the centrist pro-Israel community were even blunter: Beto O’Rourke, the former Texas congressman, called Netanyahu a “racist,” and Sen. Bernie Sanders, I-Vt., wished out loud that Netanyahu would lose.

Trump actively boosted Netanyahu ahead of the election, inviting the prime minister to the White House to watch as Trump signed a decree recognizing Israel’s sovereignty over the Golan Heights and reposting a Netanyahu campaign ad on Trump’s Instagram account. On Wednesday, Trump posted on Twitter a scene from Netanyahu’s victory rally, where a Netanyahu backer was hoisting a Trump banner.

Democrats, already unsettled by the close Trump-Netanyahu relationship, were not happy with Trump’s intervention.

“Israeli voters have spoken and we respect their decision,” the Jewish Democratic Council of America said in a statement. “But we cannot ignore that President Trump put his thumb on the scale in an attempt to influence the outcome of Israel’s election, and we reject his intervention in the strongest possible terms, just as we reject foreign interference in our own election.”

Another decision Trump and his team took in Netanyahu’s favor ahead of the election: It delayed releasing the peace plan drafted by Trump’s son-in-law, Jared Kushner; his top Middle East negotiator, Jason Greenblatt; and his ambassador to Israel, David Friedman. Any concessions in the plan might have been used by parties to the right of Netanyahu’s Likud to portray the prime minister as soft on Israel’s West Bank claims.

Trump in his remarks Wednesday was eager to press ahead with the plan. Netanyahu, savoring his election to a likely fifth term as prime minister, may have reason to be wary of its release both because of any concessions it would expect him to make, but also because of parts that would accommodate Netanyahu’s plans to annex settlements.

One of Netanyahu’s most emphatic vows has been to keep Jerusalem united. Trump’s plan, reports have said, accommodates Palestinian claims to some suburbs of Jerusalem, although team members have rejected those reports as speculative.

Less speculative is the prospect that the plan envisions Israel maintaining security control of the West Bank, an outcome that would at least mitigate, if not negate, full statehood for Palestinians.

Democrats, even the most pro-Israel among them, are not letting go of the two-state solution anytime soon. Expect more Democratic anger at the Israeli prime minister should he enthusiastically embrace a Trump peace plan that stops short of Palestinian statehood.