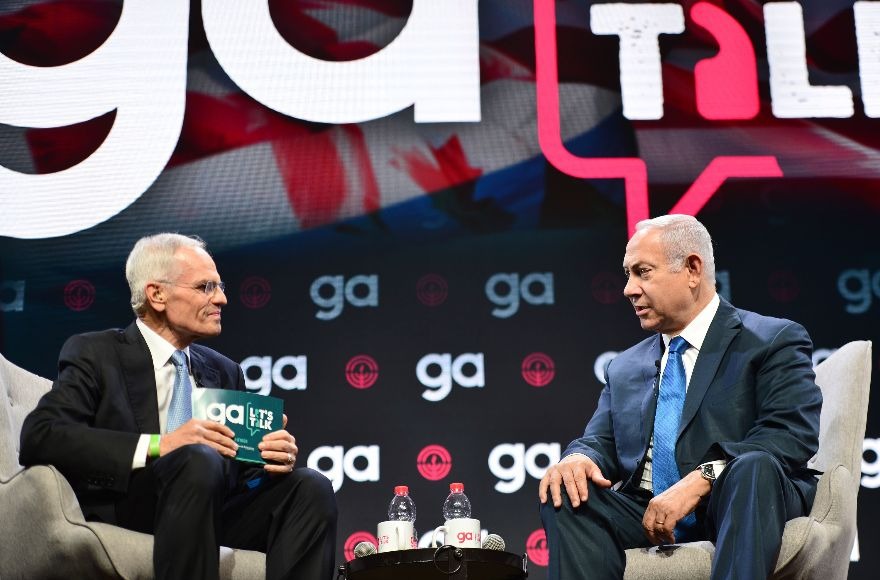 Netanyahu also said in a question-and-answer session Wednesday at the General Assembly of the Jewish Federations of North America that he suspended the compromise over the egalitarian section at the Western Wall last year because otherwise it would have meant the collapse of his government.

Near the end of his remarks, he cited an op-ed published in JTA.

The prime minister responded to a question about the two-state solution by saying “I don’t believe in labels.” He said that in any future scenario, Israel would not give up security control of all of the territory west of the Jordan River — an area that encompasses Israel, the West Bank and Gaza.

“A potential solution is one in which the Palestinians have all the powers to govern themselves but none of the powers to threaten us,” he said. “West of the Jordan, Israel and Israel alone will be responsible for security… It’s not just a question of hot pursuit. It’s also having the ability to be there all the time.”

“It is what it is. You can give it any name you want: state-minus, autonomy-plus, autonomy plus-plus … We’re not going to imperil the life of the state [of Israel], you know, for a label or a good op-ed.”

Netanyahu opposed a Palestinian state for much of his career before endorsing the idea in a 2009 speech at Bar-Ilan University. He backtracked in 2015, pledging before his re-election that a Palestinian state would not be established in his coming term.

Earlier in the session, he said that the compromise over the Western Wall — it would have expanded the non-Orthodox prayer area at the site — was frozen last year because haredi Orthodox parties in his governing coalition threatened to leave the government over a section of the agreement that implied tacit recognition of non-Orthodox Jewish movements.

Netanyahu said that faced with the choice of reneging on the deal or losing his government, he opted for the former. He added that construction of the non-Orthodox prayer area is continuing apace, even as the agreement itself was suspended last year.

“It was challenged immediately by the ultra-Orthodox street and they basically said, choose: You can have a government, no government,” he said. “This is the reality. So rather than cancel this agreement because of this explanatory note, I said, no, we’re not going to cancel it, we’re just going to suspend it, keep it there. Don’t cancel it but move with what the agreement actually says it will do, which is refurbish the plaza.”

Near the end of the event, Netanyahu said what worried him more than the Western Wall was loss of Jewish identity outside of Israel. He cited an op-ed in JTA by Reform Rabbi Ammiel Hirsch to illustrate his point.

“What concerns me in terms of the Jewish people is one thing, and that’s the loss of identity,” he said. “It’s not the question of the wall or conversion. I read an article by Rabbi Hirsch, I think it was published in the JTA, and there was a line that is, it said, ‘Those who are not concerned with Jewish survival will not survive as Jews.’ There’s some basic truth to that.

The line in the op-ed read: “In the modern world, those who are not committed to Jewish survival will not survive as Jews.”

Hirsch, senior rabbi of Manhattan’s Stephen Wise Free Synagogue, was among a small group of rank-and-file North American rabbis who were invited to meet last week with Netanyahu, who reportedly has been frustrated with criticism coming from the leadership of the Reform and Conservative movements.