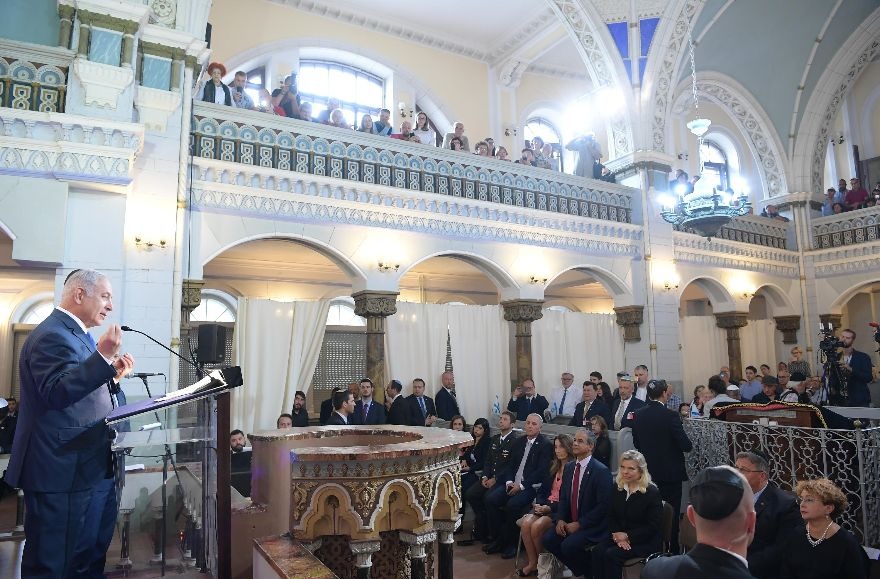 (JTA) — Israeli Prime Minister Benjamin Netanyahu told leaders of the Lithuanian Jewish community that many are still attempting to destroy the Jewish people.

Netanyahu and his wife, Sara on Sunday visited the Choral Synagogue in Vilnius, the only synagogue in the city that survived World War II.

He noted that he is a Litvak on both sides and called his visit is a return. “I come to Vilna, I return to Vilna as the head of a proud, strong, advanced Jewish state. For the Jewish people, what has changed in these 75 years? Not the attempts to destroy us. They’re still (trying) to destroy us. Iran says so openly. Hamas says so openly and others. What has changed is our ability to defend ourselves by ourselves. We are no longer defenseless. We are no longer helpless. We are a power that controls our own destiny with the State of Israel and the army of Israel.”

The Netanyahus visited the Vilna Ghetto on Saturday. “Yesterday we saw the glory of Jewish Vilna that was lost and in this visit we see an expression of what has been retrieved – the rise of the reborn Jewish state of Israel. What a distance we have travelled in 75 years from the death pits of Ponar to a rising power in the world,” he said.

Netanyahu was accompanied by Lithuanian Foreign Minister Linas Linkevičius, who he called a “great friend.”

“I want to thank you Linas for standing up for Israel and the truth in European forums, for telling your colleagues the service that Israel performs in saving so many European lives by our resourceful and brave intelligence people. We have saved so many European lives in so many countries. Israel in many ways is the defender of Europe and it’s time that Europe understood this,” he said.