Netanyahu campaign ad: A dis of Obama or show of strength on Israel’s security? 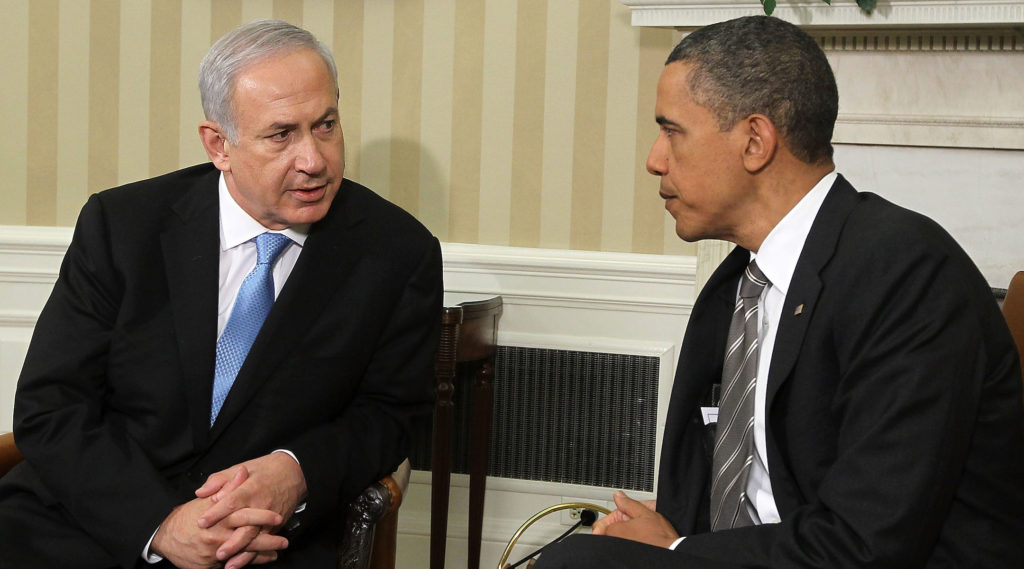 JERUSALEM (JTA) — Is Israeli Prime Minister Benjamin Netanyahu trying to convince the Israeli public of his national security bona fides? Or is he taking a cheap shot at Barack Obama?

Two weeks before Israelis go to the polls, a Likud party campaign ad shows Netanyahu lecturing the former U.S. president about the peace process in 2011 in front of reporters in the Oval Office.

Netanyahu posted the 60-second spot on Twitter and Facebook. The ad is a clip taken from the PBS documentary “Netanyahu at War,” which shows part of the prime minister’s Oval Office harangue, and includes remarks by former Obama aides who criticize Netanyahu’s public stand against the president over the peace process in Obama’s own office.

During that White House visit, Netanyahu told Obama that for Israel to make peace, “Palestinians will have to accept some basic realities.”

“Israel obviously cannot be asked to negotiate with a government that is backed by the Palestinian version of al-Qaida,” Netanyahu is seen saying in the video clip. He also talks about the Palestinians’ demand for a right of return.

In the Facebook post of the ad. Netanyahu wrote in Hebrew: “In the face of all pressure, I will protect our country.”

“Netanyahu has built his re-election campaign on racism, fear-mongering and outrageous smears,” J Street tweeted. “Now his new ad highlights his disrespect for Barack Obama and contempt for the peace process. Is this the bipartisanship AIPAC was touting this week?”

But Michael Doran, a senior fellow at the Hudson Institute who specializes in Middle East security issues, disagreed that the ad was designed to dis Obama. Doran said it was meant to reiterate the message that Netanyahu is tough when it comes to Israel’s security.

“In a campaign video, Netanyahu enlists the outrage of Obama officials at the way he spoke to Obama in the Oval Office. The message: I won’t be intimidated; I’ll hang tough where it really counts,” he tweeted.

A self-proclaimed Israel supporter seemed to agree with both, responding to Doran’s tweet: “(I)t’s smart local politics, but horrible for US consumption. I mean Bibi is right here, but it’ll be accepted here like a lead balloon in lots of quarters. If anything, he’s made AIPAC’s job a lot harder.”

Matt Duss, the foreign policy adviser for Sen. Bernie Sanders, a Democratic presidential candidate, couched the ad in racial terms, tweeting that it shows how Netanyahu “disrespected the first black president in his own house.”

“Joshua,” who describes himself as a Christian and a Nationalist, responded to Duss: “He was pleading for his countries [sic] existence. A return to the lines of 1967 would invite another war for the very existence of Israel. Yet you use the disgusting slander of racism to attack Netanyahu? Shame on you!”

“No denying Netanyahu & Obama did not get on, but it had nothing to do with Obama being black. Shame on you for even suggesting that,” he tweeted.