Nazi comparisons have long been off-limits for American Jews. A new political ad suggests that’s changing in the Trump era.

(JTA) — Is it OK to compare Donald Trump to a Nazi?

In line with their longtime opposition to such rhetoric, anti-Semitism watchdog groups are speaking out against the use of Nazi comparisons to attack Trump and his administration.

But that bright line appears to be blurring for many with the president stepping up his efforts to discredit the election results in November and refusing to promise a peaceful transfer of power should he lose to Joe Biden.

The immediate flashpoint in the debate is a new 30-second ad released Tuesday by the Jewish Democratic Council of America that draws parallels between the rise of fascism in Germany and the Trump presidency.

In swift and strong rebukes, the anti-Semitism watchdogs condemned the ad as offensive. One came from the Anti-Defamation League, which has been anything but shy in calling out a range of Trump’s statements and actions.

However, some endorsed the ad, notably the prominent Holocaust scholar Deborah Lipstadt and the ADL’s former longtime national director, Abraham Foxman, himself a Holocaust survivor. They expressed sympathy for such concerns about the state of America under Trump.

On Tuesday night, the Jewish Democratic Council was playing up its ad, connecting its ominous message to Trump’s failure to condemn white supremacists in his first debate with Biden, the Democratic nominee. Instead, Trump appeared to instruct an extremist right-wing group, the Proud Boys, to “stand back and stand by.”

The condemnations of the ad were part of the longstanding effort of Jewish groups to make Nazi and Holocaust comparisons taboo. But a growing number of historians, activists, politicians and journalists — many, but not all of them liberals or Democrats — have taken up the line that Trump and his administration are deploying rhetoric and breaking norms in a manner similar to the Nazis as they rose to power and took control of Germany.

The Jewish Democrats’ ad contrasts images from the rise of fascism in Europe in the 1930s with images from the nearly four years of the Trump presidency. They include neo-Nazi marchers in Charlottesville, Virginia, in 2017, Trump speaking at a rally and the massacre of 11 Jews in the 2018 Pittsburgh synagogue shooting. A synagogue defaced with graffiti in the present day is presented alongside photos of graffitied Jewish shops in the ’30s.

Titled “Hate doesn’t stop itself, it must be stopped,” the ad implies that Trump is responsible for the anti-Semitism of the far right. It comes days after Biden said Trump is “sort of like Goebbels,” referencing the Nazi propaganda minister Joseph Goebbels.

The ADL did not directly weigh in on Biden’s Goebbels comment, but it did issue a sharp condemnation of the Jewish Democratic Council’s ad.

“This has no place in the presidential race and is deeply offensive to the memories of 6M+ Jews systematically exterminated during the Shoah,” tweeted Jonathan Greenblatt, the ADL’s CEO, using a Hebrew word for the Holocaust. “[T]he hate [and] extremism in this race is alarming and should be repudiated unambiguously. Elected leaders who engage in lying, scapegoating, and routinely call for violence should be condemned, full stop. At the same time, we urge leaders & their surrogates to refrain from invoking the #Holocaust in the context of the current election. It is not the same. Stay focused on the issues.”

The American Jewish Committee and Simon Wiesenthal Center also called for the ad to be taken down.

The Jewish Democratic Council did not appear to be chastened by the condemnations from legacy groups. Its executive director, Halie Soifer, seized on Trump’s “Proud Boys moment” to reinforce the ad’s message.

“Trump just refused to condemn white nationalism,” she said on Twitter, reposting the ad. “He called on Proud Boys and others featured in this ad to ‘stand-up and stand-by’.” (Trump, in fact, said “Stand back and stand by.”)

Rep. Ted Deutch, a Florida Democrat who is a leader in the unofficial Jewish congressional caucus, said it was Trump who had pushed boundaries.
“Does the ad seem to push the boundaries? It does,” he said Wednesday. “But last night Donald Trump once again obliterated the boundaries when he refused to condemn white supremacists.”

Soifer said in an interview that the ad is set to play on web platforms in swing states with substantial Jewish populations, including Florida, and a TV ad buy was being considered.

In a text to the Jewish Telegraphic Agency, she noted the expressions of joy that Trump’s “stand by” call elicited from white supremacists on social media.

“The president’s blatant refusal to condemn white supremacists — which has clearly incited the Proud Boys — underscores the importance of our message,” she said. “I hope those who are concerned by the president’s words last night understand that the urgent warning in our ad — that hate does not stop itself, it must be stopped — is both accurate and timely.”

On Twitter, a rabbinical student named Talia Kaplan questioned the priorities of Jewish organizations that rushed to condemn the Jewish Democrats’ group.

“Jewish orgs: now would be a great time to express as much outrage about ‘stand by’ as about Holocaust analogies,” she said.

In a sign of how disorienting the discourse has become, Greenblatt found himself condemning Trump on Twitter hours after he had condemned the Jewish Democratic Council for analogizing Trump’s presidency to the rise of fascism.

Trump “owes America an apology or an explanation,” the ADL leader said.

On Wednesday, Trump told reporters that he had not heard of the Proud Boys, but added “they need to stand down.”

The ADL and the Wiesenthal Center stood by their statements condemning the ad after Trump’s Proud Boys episode on Tuesday, and the AJC had not answered a query by Wednesday afternoon. The Wiesenthal Center said it “is extremely disappointed and troubled that President Trump did not explicitly denounce white supremacists. He needs to.” 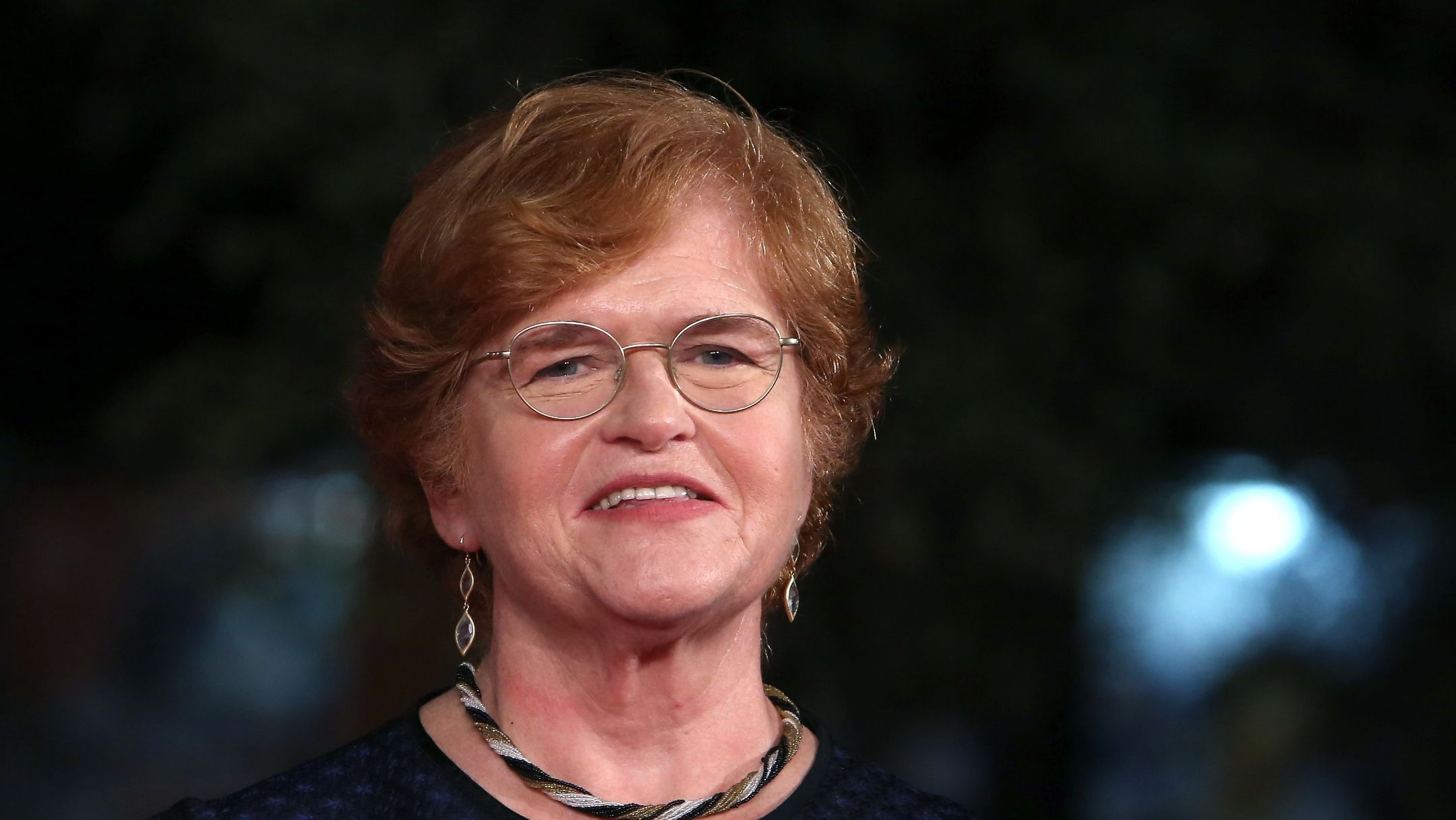 Deborah Lipstadt at a showing of “Denial” at the 11th Rome Film Festival, Oct. 17, 2016. (Elisabetta A. Villa/WireImage)

The Jewish Democratic Council did not exactly come empty-handed to the debate over whether invoking Nazi comparisons was legitimate when talking about Trump. Lipstadt, the Holocaust historian, argued that in fact it was fine to compare 1930s Germany and what critics call Trump’s breaking of norms.

Lipstadt, who endorsed Barack Obama twice but has been tapped by administrations of both parties for her Holocaust-related expertise, also stressed that the ad made use of images of Nazi Germany but not of the Holocaust itself.

“I would say in the attacks we’re seeing on the press, the courts, academic institutions, elected officials and even, and most chillingly, the electoral process, that this deserves comparison,” she said in a videoconference hosted Tuesday by the Jewish Democratic Council. “It’s again showing how the public’s hatred can be whipped up against Jews. Had the ad contained imagery of the Shoah, I wouldn’t be here today.”

Likening a political opponent to Nazis has long been a taboo that some leading Jewish institutions and organizations have sought to enforce: The Holocaust was unprecedented and unmatched since in the breadth of its horror and its ambition, the total destruction of the Jews. Comparisons, the argument went, diminished the Holocaust and deprived its lessons of the potency to prevent its recurrence.

Lipstadt has taken that stance in the past.

“When you take these terrible moments in our history, and you use it for contemporary purposes in order to fulfill your political objectives, you mangle history, you trample on it,” she told Haaretz in 2011.

But in the current era, Lipstadt said, the key to acceptable Holocaust comparisons is precision and nuance. Is it the Holocaust? No. But does the current era presage an authoritarian takeover? Maybe.

“People ask me, is this Kristallnacht?” she said. “Is this the beginning of pogroms, etc.? I don’t think those comparisons are correct. “However, I do think certain comparisons are fitting … it’s certainly not 1938,” when Nazis led the Kristallnacht pogroms throughout Germany. “It’s not even September 1935, and the Nuremberg Laws” institutionalizing racist policies.

Foxman, the former ADL director, also said comparisons to Weimar Germany are apt. Even more than Lipstadt, Foxman has long spoken out against Nazi comparisons.

“Germany did have institutions and they did have democracy and it did fall apart so, yeah, it’s not Germany, and it’s not Nazism, but our antennas are quivering,” Foxman told JTA.

“We’re not calling Donald Trump a Nazi,” she said. “We are warning against the ominous parallel of the rise of Nazism and the use of hatred for political purposes and the numerous signs that Donald Trump is doing the same.”

The Republican Jewish Coalition has condemned the ad, and called on Biden to retract and apologize for his reference to Goebbels.

“The rule in debate is that if your only argument is to call your opponent a Nazi, you have no argument at all,” RJC Executive Director Matt Brooks said in a statement.

The calls from Brooks and others for apologies would likely go unheeded, which has been the norm on both sides when one calls out the other for Nazi analogies. In 2017, Trump likened probes into his campaign’s alleged ties with Russia to “living in Nazi Germany,” with nary a Republican rebuke. Just this summer, in a Zoom meeting to rally its members, the RJC featured the right-wing radio host Mark Levin, who has called Nancy Pelosi, the Democratic House speaker, a “fascist” and Obamacare supporters “brownshirts.”

The Zionist Organization of America’s president, Morton Klein, in a tweet Tuesday called the Jewish Democratic Council’s ad “disgraceful.” In July, on the same social media platform, he had accused the liberal political donor George Soros, a Holocaust survivor, of “helping Nazis find Jews” — an extreme misrepresentation of one of Soros’ experiences as a child.

Brooks on Twitter called on Lipstadt to address the ad. Lipstadt directly replied in the Zoom call, saying Trump was emulating Goebbels in repeating a lie until his followers had internalized it.

“Goebbels was very successful at what he did, and I think the comparison by Vice President Biden was a very apt comparison because we’re seeing a lot of this now,” she said.

Foxman said the intensification of hatred, including the rise of anti-Semitic attacks and attacks on other minorities, did not have to rise to the level of Nazism to set off alarms.

“There is serious hate out there which is reminiscent of the hate that we lived through, part of our history,” he said. “Jewish antennas quiver — it doesn’t have to be Nazism to worry us that hate is out there, and hate is not being challenged.”