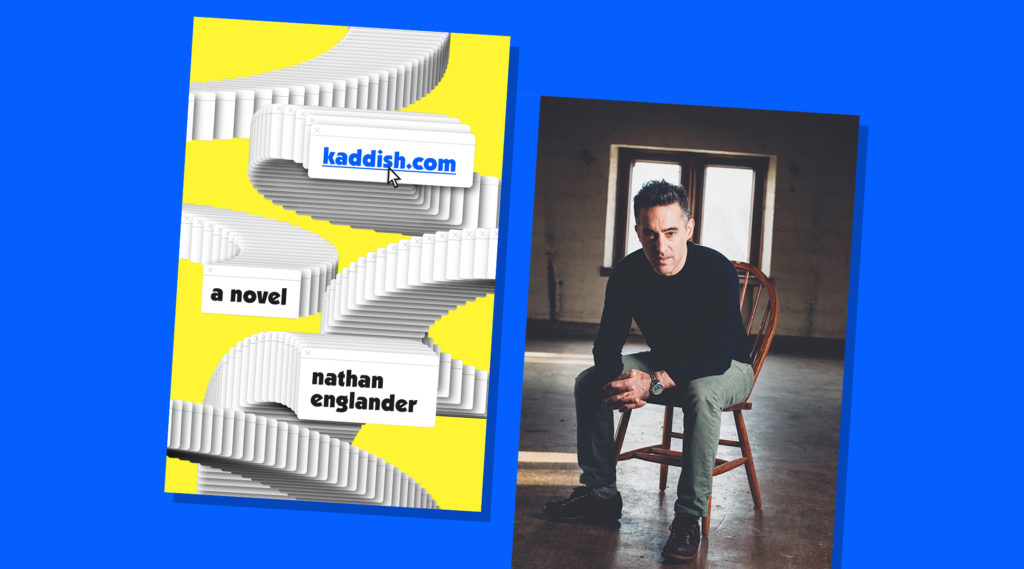 NEW YORK (JTA) — Sitting in a kosher bakery in the town of West Hempstead, on Long Island, Nathan Englander admits it: He sees the world through, in his words, “hummus-colored glasses.”

“Without being silly, every character, every setting, every food, every thought — the weather in my books is Jewish,” he says, speaking at a whirlwind pace and clutching a cup of coffee.

His Jewish roots are traced back to the small town with a sizable Modern Orthodox community about 45 minutes by car from his current home in brownstone-lined Clinton Hill, Brooklyn.

West Hempstead is even more Jewish than he remembers it — a half hour earlier, he pointed out a couple of Hatzalah first-responder trucks parked across the peaceful suburban street from his old modest-sized synagogue. The old Carvel ice cream store where he used to hang out now has signage on its window marking it as kosher. Decades ago, he explains, kosher certification wasn’t as big a deal — people looked through ingredients on packages to determine for themselves if something was kosher enough to eat.

Englander, 49, grew up wearing tzitzit and studying hours of Talmud a day, but now looks like just about any other secular Brooklyn dad (he has a 4-year-old daughter). He’s about 5-foot-8, with slight bags under his eyes that hint at a mix of child care and his obsessive editing process: He jokes that he has only recently lowered his average time in between publishing books to about four years from over twice that. His fuzzy gray sweater tastefully matches the same-colored hair that’s starting to spread from his sideburns to the top of his head.

He’s brought along his black dog, Calli, a rescue who periodically telegraphed her separation anxiety throughout the ride from Brooklyn from the back of his sedan.

“Sometimes I get introduced as a young writer, which I love, ’cause I’m not 50 yet,” he said.

Englander was gearing up for the publication of his fifth book, a darkly humorous novel titled “Kaddish.com” that hit shelves Tuesday. It features a formerly Orthodox man named Larry who goes to stay at his sister’s house in Memphis to sit shiva for his father. Secular Larry clashes with his still-Orthodox sister and the rest of the community there, and he won’t promise to say the Kaddish prayer three times a day for a year for his father — a requirement of Orthodox law.

So Larry, his sister and her rabbi come up with a plan: Larry can simply find a proxy to say the prayer for him. He does just that through the website Kaddish.com, which does not exist in real life, despite Englander’s attempts to buy the domain from its unwilling current owner (he does have Kaddish.com.com, however). But Larry starts to feel remorse about his decision over time and the story takes a sharp, unexpected turn.

“What I like about Judaism — Jewish law is very strict, but there are a lot of ways to make stuff OK,” Englander said. “There’s a lot of ‘we’ll figure it out,’ which I find very nice and comfortable.”

Englander certainly wasn’t comfortable growing up, studying through long days of Jewish and secular subjects, holding in his questions about God and being bullied by anti-Semitic kids from the other side of town. Literature was always a solace — he calls finding his sister’s copy of “1984” and his parents’ copy of “Portnoy’s Complaint” life-changing moments — but fiction writer was never a realistic career choice in his world.

“I felt like I was living this life, it’s not a fit for me, but … this is my lot in life, I’m going to live in a world where I don’t fit in, and I’ll just be an unhappy person,” he said.

That changed when Englander studied abroad in Jerusalem during his junior year of college and came in contact with secular Israelis.

“Obviously I knew secular Jews in college, but they were so different from what I was I couldn’t make the leap,” he said. “But it was in Israel [where people had the] same reference points … Seeing an atheist who’s speaking Hebrew and knows what Purim is and knows the same songs … I was like ‘Ah, this is what it means to be a cultural Jew, and that’s what I am.’”

That didn’t mean he only wrote about secular Jews. For instance, the titular story in his acclaimed debut book of short stories, “For the Relief of Unbearable Urges,” involves a Hasidic Jew whose rabbi allows him to see a prostitute. Another from that collection, “Reb Kringle,” involves a bearded Orthodox man who plays Santa Claus at Christmas.

But even more so than “Unbearable Urges,” Englander calls “Kaddish.com” the book he’s been waiting his “whole life” to write, and one that brought him back to where he started. Besides the secular-Orthodox tension, the book’s other major theme involves the interaction between God — a concept he has contemplated since his early teenage Shabbat nights, staying up late in the dark in his bedroom — and the internet, something he has a lot to say about these days.

“The omniscience of God … if you’re plugged in right now, we’ve already achieved that: They know everything you’ve done, everything you’re currently doing,” he said, referring to online personal data mining. “Everyone needs to buy in, but we have beta God.”

After walking by the town pond he used to skate on (where he laments that climate change has left it unfrozen in February) and his old day school (where a security guard and the principal immediately swarm us, in case we were somehow connected to the creepy possible anti-Semites who’ve been spying on the school recently), we get in the car to drive back. In a pocket of the dashboard sit a few Lactaid pill packs, which he says he drops all over Brooklyn like breadcrumbs.

“I’m tolerant of all things, except lactose,” he says.

Back in Brooklyn, we visit his writer’s studio — which turns out to be a small room lined with books in an artfully decorated Park Slope apartment owned by fellow writer John Wray. Wray lets some other famous writer friends, such as Marlon James and Akhil Sharma, write in other rooms on the same floor as Englander. The bottom main floor is spacious and the couch feels incredibly comfortable after a day of walking.

“How I relate Jewishly today is kind of fraught and confusing just because [of the question], ‘do you believe in God?’ I don’t know, I don’t even have to invest in that … but now that I’m a dad, it’s really interesting to decide what I’m passing on,” Englander says. “There’s a lot I have to figure out now.”

He’s not sure of the exact topic for his next book either, but he does know that he’s going to put a lesson gleaned from his late friend Philip Roth into practice and write constantly.

“[Philip] talked about finishing a book and going to the Natural History Museum [in New York] and standing under the big whale and thinking, ‘That’s what I’m going to do all day?’” Englander said. “And he went home and started the next novel.”