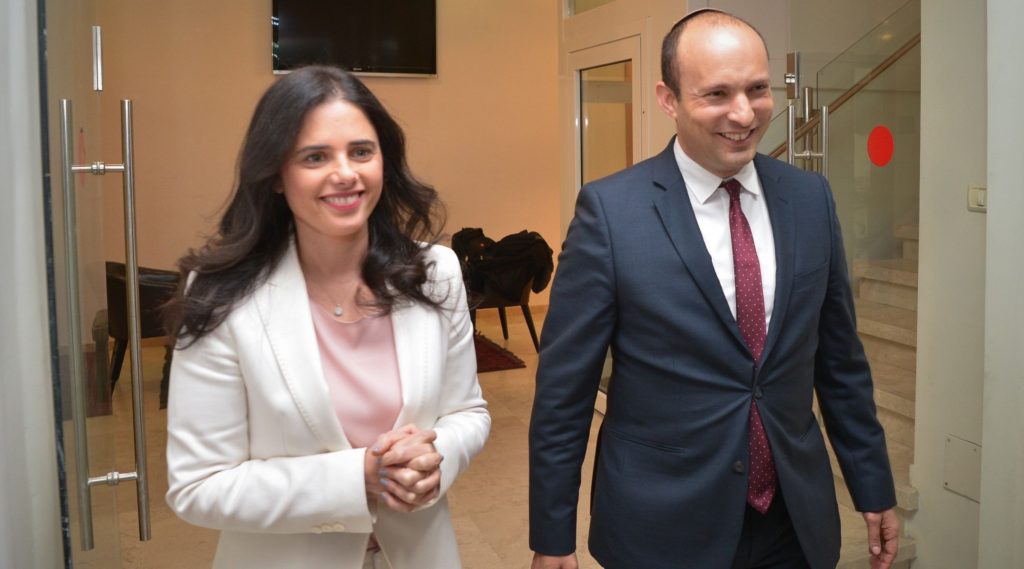 JERUSALEM (JTA) — Jewish Home Party head Naftali Bennett and party leader Ayelet Shaked announced that they would leave the party and form a new alliance ahead of national elections.

Bennett, who serves as education minister in Benjamin Netanyahu’s right-wing government, and Ayelet Shaked, who serves as justice minister, at a news conference Saturday night in Tel Aviv announced the founding of Hayamin HaHadash, or The New Right, which they said would be a party based on a “full and equal partnership” between Orthodox and secular Israelis.

“The prime minister thinks religious Zionists are in his pocket and no matter how much he harms the religious Zionists they will continue to go along with him,” Bennett told reporters in explaining the need for a new right-wing party.

The Knesset House Committee authorized the arrangement on Sunday.

The party list reportedly will alternate religious and secular candidates and its platform will oppose the creation of a Palestinian state.

Jewish Home is made up of several smaller Religious-Zionist parties, represented by the National Religious Party and the National Union. Bennett and Shaked have frequently butted heads with members of the small Tkuma Party, including current Jewish Home lawmaker Betzalel Smotrich.

Israeli media including the KAN national broadcaster are reporting, however, citing senior officials from the new party and Jewish Home, that Jewish Home and The New Right will form a bloc during coalition negotiations with Prime Minister Benjamin Netanyahu, should his Likud Party earn the right to form the new government after the April 9 elections, as is expected.

The split into two parties, the traditional Religious-Zionist party and one more welcoming to secular right-wingers, reportedly is designed to bring more votes into the right-wing fold.

Benny Gantz, the former chief of staff of the Israel Defense Forces, on Thursday registered his own political party, the Hosen LeYisrael party or, in English, the Israel Resilience Party. Though it has not yet released an official party platform, it is said to be honing a centrist line. Former Defense Minister Moshe Yaalon, who it is believed will be popular with voters, is said to be in talks with Gantz to join his party’s list. Several polls have shown Gantz’s party coming in second to Likud.

On Wednesday, the Knesset voted to disband and go to early elections.