Mitt Romney: Two-state solution is all there is 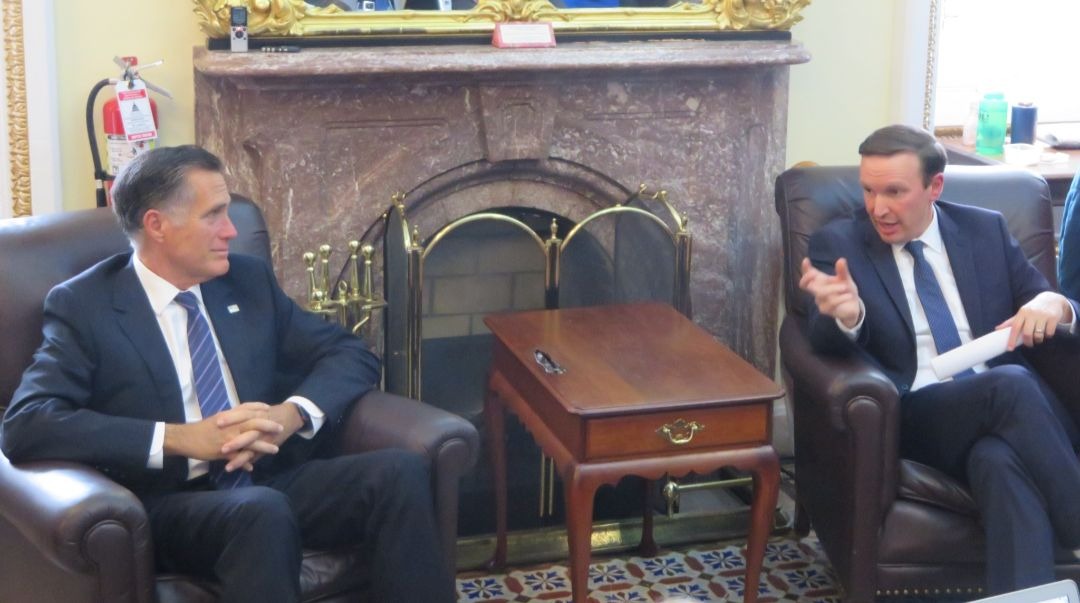 WASHINGTON (JTA) — Sen. Mitt Romney returned from a Middle East tour saying that he saw no alternative to the Israeli-Palestinian conflict other than the two-state solution.

The Utah Republican, his party’s 2012 presidential nominee, has just assumed the chairmanship of the Middle East subcommittee in the Senate. Romney’s conclusion could put him at odds with the Israeli government, which now says that the two-state solution is all but moribund, and with the Trump administration, which has retreated from U.S. policy endorsing a two-state outcome.

Sen. Chris Murphy, D-Conn., the ranking member on the subcommittee, traveled with Romney and sat at his side during the briefing in the Capitol. He nodded in agreement, saying “right.”

Their bipartisan unity on the issue could foreshadow tensions between the Trump administration and Congress should its long-awaited Israeli-Palestinian peace proposal count out a two-state solution. Drafters of the plan, including Trump’s son-in-law Jared Kushner, have been at pains to avoid using the term “two-state solution,” although when challenged they have said they have not discarded it. Kushner has said the plan will be released in June.

Romney went on to describe leaders he and Murphy met in the Palestinian areas and Jordan.

Israeli Prime Minister Benjamin Netanyahu said on the eve of last month’s election that there would not be a Palestinian state on his watch and that he planned on annexing parts of the West Bank. Romney would not comment on Netanyahu’s plans.

Romney and Murphy met with the new Palestinian Authority prime minister, Mohammed Shtayyeh, but not with Netanyahu, with whom they spoke separately over the phone. There was speculation in the Israeli media that Netanyahu did not want to alienate President Donald Trump by meeting with Romney, who has feuded with Trump. Netanyahu was with his family in the Golan Heights. Romney said he accepted Netanyahu’s explanation that he needed a vacation after the April 9 election.

Romney said Shtayyeh showed the delegation a map of Israeli settlements in the West Bank.

“He obviously communicated how difficult it would be to carve out a Palestinian state given the location of those settlements,” Romney said. “But he described the most extreme view in terms of what Israel might ask for in terms of territory. Time will tell, there will be a process of negotiation hopefully led by our country, and I hope that the framework that comes out is one that leads to that kind of fruitful discussion. But time will tell.”

Romney and Murphy both said the Palestinian Authority’s payments to Palestinian families of terrorists who had killed Israelis complicated congressional efforts to renew funding for the Palestinians, which have been slashed by the Trump administration.

“There is real worry about what the reaction on the Jordanian street will be to a peace framework that is not a true framework for discussion,” Murphy said. “There is a general worry around the region as to what the political fallout will be if this agreement, this framework, is a nonstarter.”