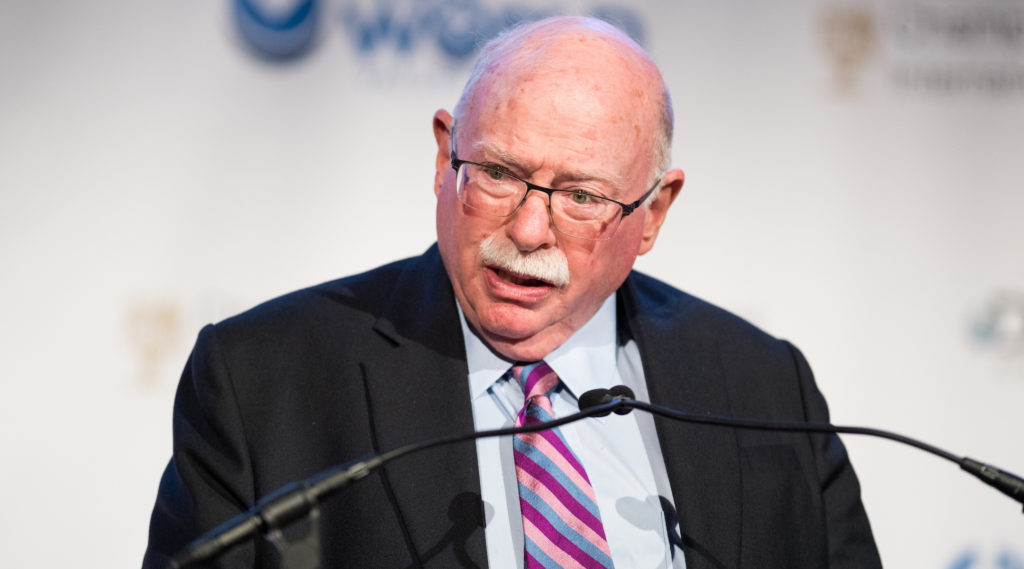 (JTA) — Michael Steinhardt, the megadonor who helped found Birthright Israel and supports a wide range of Jewish institutions, has been accused of a pattern of propositioning and making sexually inappropriate remarks to women who have approached him as part of their work in Jewish philanthropy or the arts.

The New York Times and ProPublica, the journalism nonprofit, interviewed seven women who said that “Steinhardt asked them to have sex with him, or made sexual requests of them, while they were relying on or seeking his support.”

Steinhardt, 78, issued a statement denying the accusations, but acknowledged a pattern of comments “that were boorish, disrespectful, and just plain dumb.” Friends and supporters of Steinhardt are quoted in the article saying that they knew of Steinhardt’s often crude comments to men and women subordinates, but they were surprised that he crossed the line into sexual harassment.

None of the women interviewed by The Times and ProPublica said Steinhardt touched them inappropriately, but they said they felt “pressured to endure demeaning sexual comments and requests out of fear that complaining could damage their organizations or derail their careers.”

Sheila Katz, a vice president at Hillel International, said she was a young executive at Hillel when she was sent to solicit a donation from Steinhardt. Katz said Steinhardt repeatedly asked if she wanted to have sex with him.

“Institutions in the Jewish world have long known about his behavior, and they have looked the other way,” Katz said. “No one was surprised when I shared that this happened.”

Natalie Goldfein, the national program director of Synagogue Transformation and Renewal from 2000 and 2002, said Steinhardt suggested in a meeting “that they have babies together.” Goldfein, now a consultant to nonprofits, said he repeatedly made inappropriate comments to her.

Rabbi Rachel Sabath Beit-Halachmi, professor of Jewish thought and director of admissions at the Hebrew Union College-Jewish Institute of Religion, said Steinhardt suggested that she become his concubine while he was funding her in a rabbinical fellowship in the mid-1990s.

“He set a horrifying standard of what women who work in the Jewish community were expected to endure,” she said.

Rabbi Dianne Cohler-Esses, another Steinhardt Fellow at the time, said that Steinhardt told her she should date a married rabbi at the institute. She said she and Sabath complained about Steinhardt’s comments to the head of the fellowship.

Two women who worked at a small Jewish nonprofit not identified in the article said Steinhardt, during a meeting at his office about a donation, suggested that they take part in a “ménage à trois” with him.

Two women at a Manhattan art gallery alleged that Steinhardt, an important client, had made sexually loaded comments. They filed separate sexual harassment lawsuits, which did not name Steinhardt as a defendant. One was discontinued, the other settled.

Steinhardt’s response: Steinhardt declined to be interviewed for The Times  article, but said his “boorish” comments were made in jest. Through a spokesman, Steinhardt “denied many of the specific actions or words attributed to him by the seven women.”

“In my nearly 80 years on earth, I have never tried to touch any woman or man inappropriately,” Steinhardt said in his statement, according to The Times. Provocative comments, he said, “were part of my schtick since before I had a penny to my name, and I unequivocally meant them in jest. I fully understand why they were inappropriate. I am sorry.”

The impact: Steinhardt, 78, a retired hedge fund founder, has given at least $127 million to charitable causes since 2003, according to The Times. His signature projects include Birthright Israel, which has sent more than 600,000 young Jewish adults on free trips to Israel; a network of Hebrew charter schools; and The Steinhardt Museum of Natural History in Tel Aviv. He has made major gifts to dozens of Jewish institutions large and small.

Last year, Hillel International launched an internal investigation of allegations that Steinhardt made inappropriate sexual remarks to two female employees, The New York Jewish Week reported. The investigation, which ended in January, concluded that Steinhardt had sexually harassed Katz and another employee in a separate incident. Hillel removed his name from its international board of governors.

Rabbi David Gedzelman, president and CEO of The Steinhardt Foundation for Jewish Life, is a member of the board of directors of 70 Faces Media, JTA’s parent company. The foundation’s most recent gift to 70 Faces was $5,000.

What others are saying: Rabbi Irving “Yitz” Greenberg, the president of the Steinhardt Foundation for Jewish Life for a decade, said he “repeatedly rebuked Steinhardt for using belittling language toward both men and women.” Tension over Steinhardt’s behavior was a factor when Greenberg, a major theologian of the Holocaust, left the job in 2007.

“I understand that the women felt more shaken or threatened than I recognized at the time,” Greenberg is quoted as saying.

Abraham Foxman, the former head of the Anti-Defamation League, acknowledged that Steinhardt had a “passion” for matchmaking and programs that encouraged Jews to marry and have Jewish children.

“Call it a passion, call it an obsession, call it a perversion. Some may. I don’t — I understand it,” Foxman said. “It’s just the way it comes out, which may disturb people.”

Shoshani, the former Birthright chief executive, said he had heard “rumors” of Steinhardt’s  inappropriate comments, but did not hear them himself.

“I appreciate him very, very much. Even if there were some comments, about sex, about women, I wouldn’t take it seriously,” Shoshani told The Times, “because he made important decisions in other areas concerning Birthright.”

Charles Bronfman, the co-founder of Birthright, wrote to The Times that “Michael has his unique sense of humour. He loves to tease males and females, and certainly his very good friends. I can attest to that! Always has. But to conjure up intentions that he never had or has is more than a disservice. It’s downright outrageous!”

Shifra Bronznick, who created an organization to include more woman in positions of Jewish leadership, recalls calling out Steinhardt for his behavior in 2004 and getting pushback from colleagues who recalled his generosity to Jewish institutions.

“When people say bad things about Jews, our community leaders are on red alert about the dangers of anti-Semitism,” she said. “But when people harass women verbally instead of physically, we are asked to accept that this is the price we have to pay for the philanthropic resources to support our work.”