Meet the rabbi-and-sabermetrician duo behind Virtual Dreidel, a game made for pandemic Hanukkah 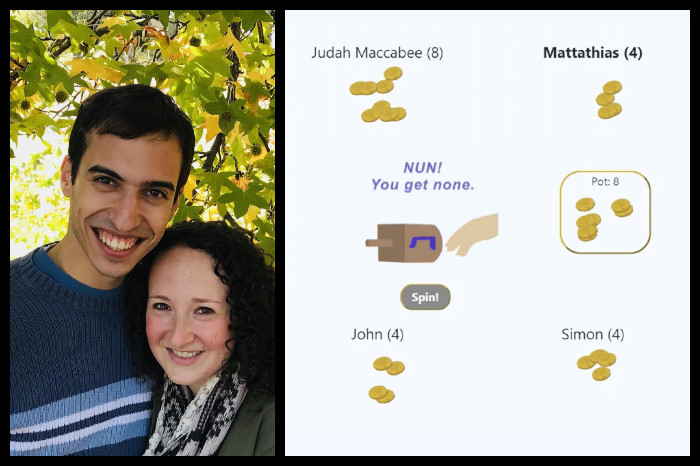 (JTA) — Back in the spring, when Jewish camps all canceled their summer sessions seemingly overnight, Rabbi Shayna Golkow knew she wanted to do something to help disappointed campers capture some of the spirit of the season.

So she worked with her boyfriend, Ben Zauzmer, to whip up Shabbat-o-Grams.com, a site that offered a digital rendition of handmade messages that Golkow remembered being a highlight of her summers at Camp Ramah in the Poconos.

By the end of the summer, camps were competing against each other to see how many messages would be delivered through the system. NCSY Camp Maor, an Orthodox girls camp in Pennsylvania, topped the leaderboard, but Golkow said everyone came away a winner at a time ruled by feelings of loss.

“Feeling like we’re able to make some tiny, tiny bit of difference in people’s level of happiness during this time has helped us,” Golkow said.

With Hanukkah approaching and the pandemic still making gatherings unsafe, Golkow and Zauzmer turned their attention to one centerpiece of holiday celebrations: competitive games of dreidel. They found sites that allowed users to spin virtual dreidels, but none that worked as a game for people competing in separate places.

So they made one, launching VirtualDreidel.com late last month. The site allows users to play against each other, trading images of gold coins as they click a button to spin their dreidels and build — or lose — their virtual pots. Golkow created the illustrations, Zauzmer coded the site, and the couple collaborated to engineer a positive user experience.

If Virtual Dreidel has some rough edges, that’s because it was a side project for Golkow and Zauzmer, who launched it while working full-time: Golkow as associate rabbi at Temple Aliyah, a Conservative synagogue in Woodland Hills, California, and Zauzmer as an analyst for the Los Angeles Dodgers who was at home when his team won this years World Series. (He’s also an Academy Awards forecaster whose book “Oscarmetrics: The Math Behind the Biggest Night in Hollywood” came out in 2019.)

When they met last year in Los Angeles, they learned that they both grew up in the Philadelphia area and went to Jewish camps in the Poconos. They designed Virtual Dreidel to be just as much fun to play with their families 3,000 miles away as with the young adults Golkow works with at her synagogue.

Users can select between non-Israeli and Israeli style dreidels — the difference is whether one letter is a shin, signifying that the miracle of Hanukkah happened “there,” or a peh, signifying that it happened “here.” (Only one type of dreidel can be used per game, in case you’re considering playing an Israeli friend or family member.) There’s even a leaderboard, once Zauzmer figured out a way to create one without storing significant user data.

And they built in a rule that anyone who has grown bored over the course of an endless match might appreciate.

“We did add a rule where the antes increase so the games don’t go on forever,” Golkow said. “We were trying to approximate the normal experience — with the added piece of hopefully people will be on Zoom with each other, connected in some way in addition to Virtual Dreidel.”

What’s next for the couple? For their own Hanukkah celebration, Golkow is considering making a batch of pickle latkes, this year’s it-recipe.

But you shouldn’t necessarily expect another online innovation to approximate experiences that Jews have traditionally had offline.

“With a little luck and a little science,” Zauzmer said, “whatever the next website we create is for post-pandemic times.”