(JTA) — The 16th-century kabbalist Moshe Cordovero and the Jewish philosopher Nachmanides both compared the universe to the size of a mustard seed. The biblical commentator Rashi – who lived 100 miles from Dijon, France – believed that Abraham served tongue with mustard to the three angels who visit him in the 18th chapter of Genesis.

Long before there were Jewish delis, mustard apparently was important to Jews — but not just Jews.

“Mustard is in almost every religion and every culture,” said Barry Levenson, the founder, curator and CMO (chief mustard officer) of the National Mustard Museum in Middleton, Wisconsin. “There’s a passage in the New Testament about the 1/8-inch of a mustard seed. There’s also something in the Quran about how the balance of your future could be determined by a mustard seed. Mustard is universal, not only as a condiment but in terms of its legends.”

Founded in 1992, the mustard museum is often listed as one of the most unusual museums in the United States, typically drawing around 35,000 visitors a year. But last year it closed for six weeks due to COVID-19. Both the museum’s revenue and Levenson’s mental health took a hit.

“It was devastating,” Levenson said. “We have a donation box because we don’t charge admission at the museum, so the donations totally stopped. It was very hard, but we’re recovering.”

To distract himself, he focused on his part-time teaching position as an adjunct professor of food law at the University of Wisconsin Law School, where he has taught for seven years.

Fortunately the museum is recovering. Since May, it’s had a steady stream of visitors, and Levenson is relieved to welcome back the crowds. He describes the museum and its visitors as his “congregation.” 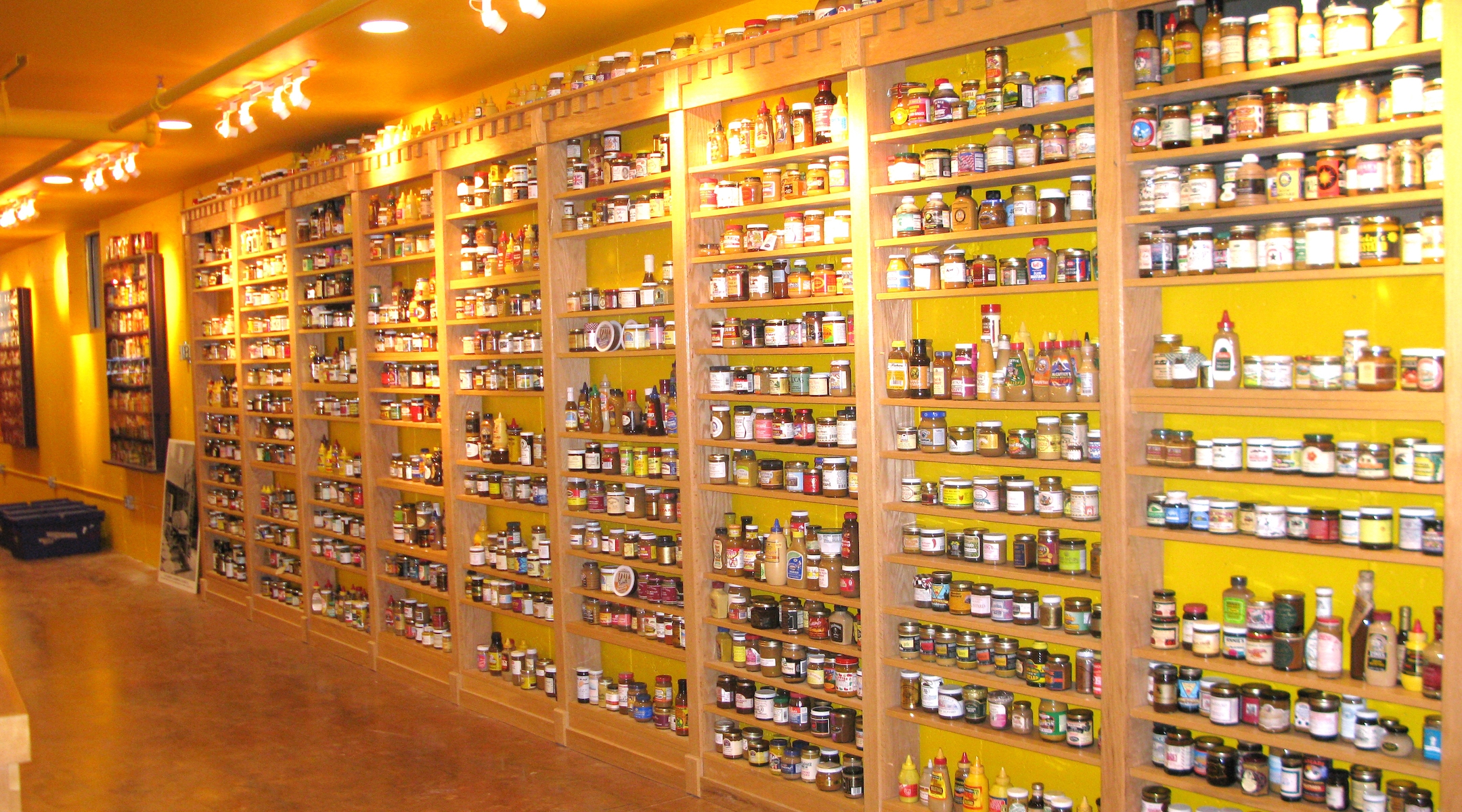 A view of some of the museum’s shelves. (Courtesy of Barry Levenson)

Levenson first started collecting mustards after his favorite baseball team, the Boston Red Sox, lost in the 1986 World Series. Despondent, he went grocery shopping after the game and was drawn to the bottles of mustard.

“It was just something about the mustards,” he said. “I heard a voice coming from them, ‘Collect us and they will come.’”

Today, the nonprofit museum contains some 6,090 mustards from over 70 countries along with a gift shop and exhibits about mustard’s history. Levenson also hosts the annual World-Wide Mustard Competition, which judges the condiment in 17 categories.

Levenson loves mustard on everything, even doughnuts and ice cream. He suggests a sweet variety – like cranberry and raspberry – for desserts and says that pecan-flavored mustard is delicious on ice cream.

“There are other uses besides putting it on a sandwich,” he said. “It’s good in sauces and dressings. Mustard is really versatile.”

Levenson has created his own concoctions, too. His most recent experiment was a mustard pudding, and he’s working up to a crème brulee.

“I’ve tried just about everything, different ingredients, flavors and spices,” he said. “I’m kind of a mustard mad scientist.”

But Levenson is a purist when it comes to deli sandwiches, only using brown mustard. Ten years ago he did an informal survey of several New York delis about what makes a good mustard. Some said it needed to have horseradish, while others preferred garlic. In Levenson’s opinion, a really good brown mustard will have a horseradish bite because both contain the compound allyl isothiocyanate, which provides the pungent flavor in both brown mustard seeds and horseradish root. Many delis serve both brown and yellow mustard to appease varying tastes.

The delicatessen originated in Germany in 1700 as a shop that sold exotic items, like bananas, mangos and plums. When Ashkenazi Jews immigrated to America, they brought the deli with them. Katz’s Delicatessen in New York – one of the world’s most famous – is credited as the first in the U.S., established in 1888. Around that time, delis expanded into offering lunch, creating a lunch break staple of sandwiches filled with corned beef or peppery pastrami.

Those fatty meats may not be healthy, but mustard is. It has few calories and contains antioxidants and other beneficial nutrients, akin to broccoli and brussels sprouts, which are members of the same plant family. It can even help with respiratory and muscular pain. Fun fact: Runners sometimes carry packets of yellow mustard to relieve leg cramps. 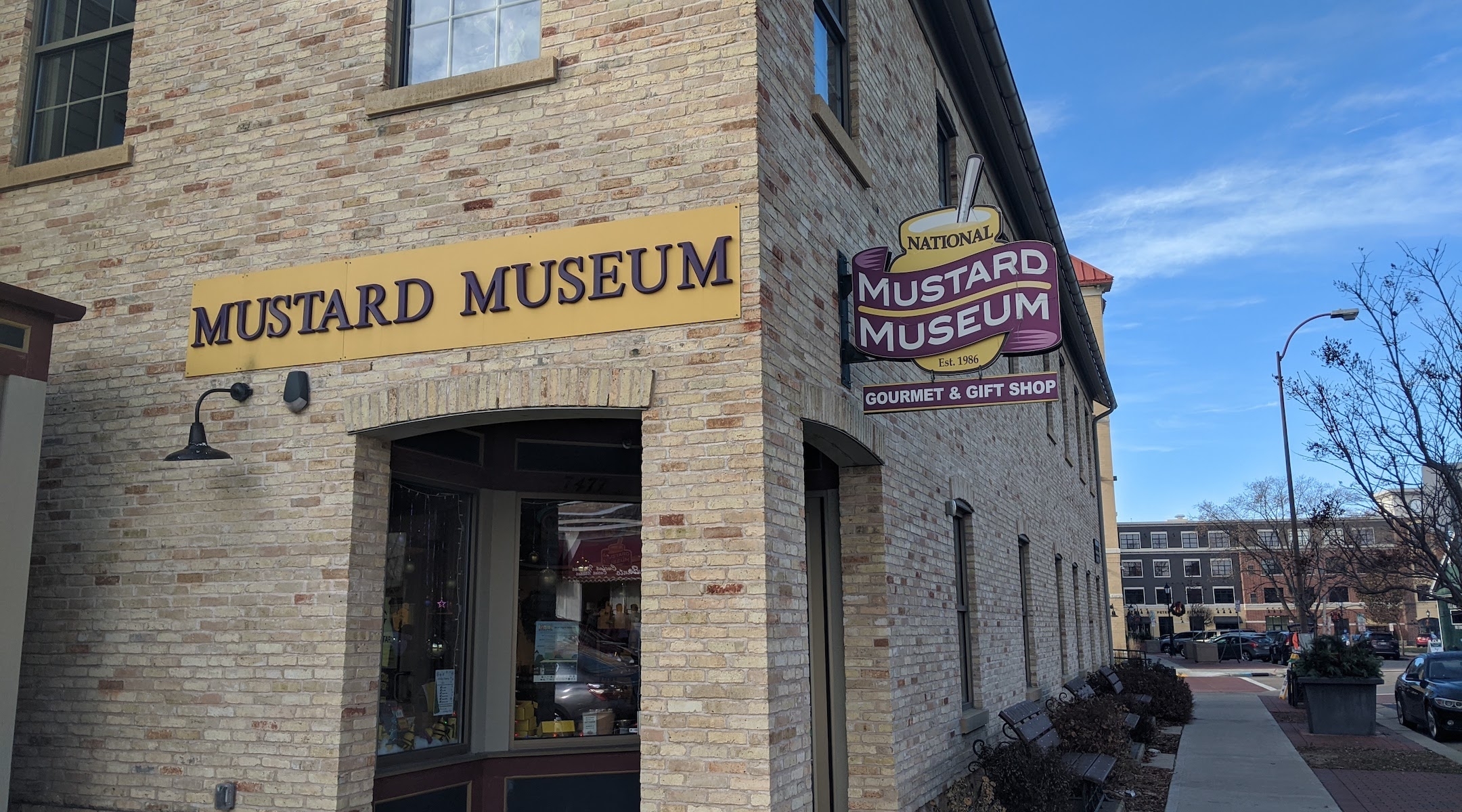 The museum is located in Middleton, Wisconsin. (Wikimedia Commons)

Mustard wasn’t always on the menu for Levenson, a native of Worcester, Massachusetts, who attended rabbinical school for a time but “chickened out” and shifted to law. Before opening the museum, he worked as a lawyer for 15 years, including a stint as the assistant attorney general for Wisconsin.

While he never became a rabbi, Levenson is active in the Jewish community and attends several synagogues. At Temple Beth El in Madison, he led the youth group and taught at its religious school.

“It’s not a very large Jewish community, but we do what we can here in Madison,” he said.

Even though he doesn’t keep kosher, carrying kosher mustard was important to Levenson, who insisted on selling dozens of kosher varieties in the museum gift shop. Some are premium offerings, like Silver Spring Foods’ Deli-Style Mustard, which was crowned grand champion and won several other awards at the World-Wide Mustard Competition in 2008. It’s a brand that Levenson uses himself, which is high praise in the condiment world.

The only thing Levenson dislikes about mustard is its relationship with ketchup. The popular, royal red condiment is much younger than mustard and sometimes steals its spotlight.

This seeming slight on his favorite ingredient is blasphemy to Levenson: “You never hear anything about ketchup in the Torah, right? No, nothing!”