Meet the Jewish founder of the world’s only bobblehead museum, and his Hanukkah bobbles

In February 2019, another niche museum opened around 90 miles east of the mustard mecca: the National Bobblehead Hall of Fame and Museum, located in Milwaukee.

Co-founded by Phil Sklar, a Jewish Illinois native, and his friend Brad Novak, the institution is the world’s only museum dedicated to bobbleheads. Its collection holds 7,000 unique bobbleheads, including some manufactured by Sklar and Novak.

Bobbleheads date back to the late 1700s, Sklar explained in an interview with the Jewish Telegraphic Agency. A famous painting of Queen Charlotte — a replica of which hangs in the bobblehead museum — shows two figurines behind the monarch, with heads that bobble.

Fast forward to 2021, when the museum has unveiled its first-ever Hanukkah items: a Bobble Menorah that features nine bobbling “flames” (sans real fire, of course) and comes in three color patterns, and a Bobble Dreidel on a gelt-shaped base.

“Having the candles with the flame bobbling and the dreidel on a spring, we thought was pretty unique,” said Sklar. “It was something that was tasteful and that people would enjoy displaying on Hanukkah, or with their Judaica collection.”

We spoke to Sklar about how a unique collection turned into a one-of-a-kind museum, how he uses bobbleheads for a good cause and, of course, which famous Jews have their own bobbleheads.

JTA: With any collection like this, the first question has to be: How did you get into bobbleheads?

Sklar: My dad collected baseball cards, and he got me into collecting when I was growing up. Brad was working for a minor league baseball team in the early 2000s, and they gave away a bobblehead for the first time in 2003. We decided the bobblehead was sort of cool, and the [Milwaukee] Brewers and Bucks and local soccer and hockey teams were giving out bobbleheads. So we started to circle the bobblehead dates on the calendar, since we were already going to several games a year anyway as big sports fans. The collection sort of grew from that.

How did this interest turn into the world’s only bobblehead museum?

The collection grew out of traveling. We went on a journey to try to go to all the Major League Baseball stadiums, and as we traveled we’d go to different museums in local places. Several times we’d either go to the stores in the area of the stadium, or antique malls, and just pick up some bobbleheads from the area to bring back.

Before we knew it, we were doing some buying, trading and selling on eBay, in our free time. Then in 2013 we set out to produce a bobblehead for the first time, of a friend of ours who was a manager for the University of Wisconsin-Milwaukee sports teams, and also a Special Olympian. We thought it would be a cool way to honor him. During that process we realized there was a need in the market, an opportunity to produce bobbleheads — people or things that otherwise haven’t had bobbleheads produced — and market them.

At the time, our collection was numbering in the 3,000 range. I don’t even know how we got that many. We were running out of room for them. It’s a lot easier to store 3,000 baseball cards — you can get one box and store them. But 3,000 bobbleheads take up a lot more room. We started brainstorming, and realized, hey, there’s no museum in the world dedicated to bobbleheads. There’s museums dedicated to mustard and spam, and a bunch of other random things. So we started to do market research on the museum side, and in November 2014 was when we announced the idea for the museum.

Tell me about the collection. How many bobbleheads do you have now, and what are some of the highlights?

We have 7,000 unique bobbleheads on display in the museum. The collection itself is now numbering in the 10,000-11,000 range. We’re getting in new bobbleheads pretty much daily. There are teams sending them in, organizations, people across the country. It’s really everything from sports to pop culture, politics, music, movies, TV, comics. Really anything and everything that can be turned into a bobblehead, including the menorah and the dreidel. 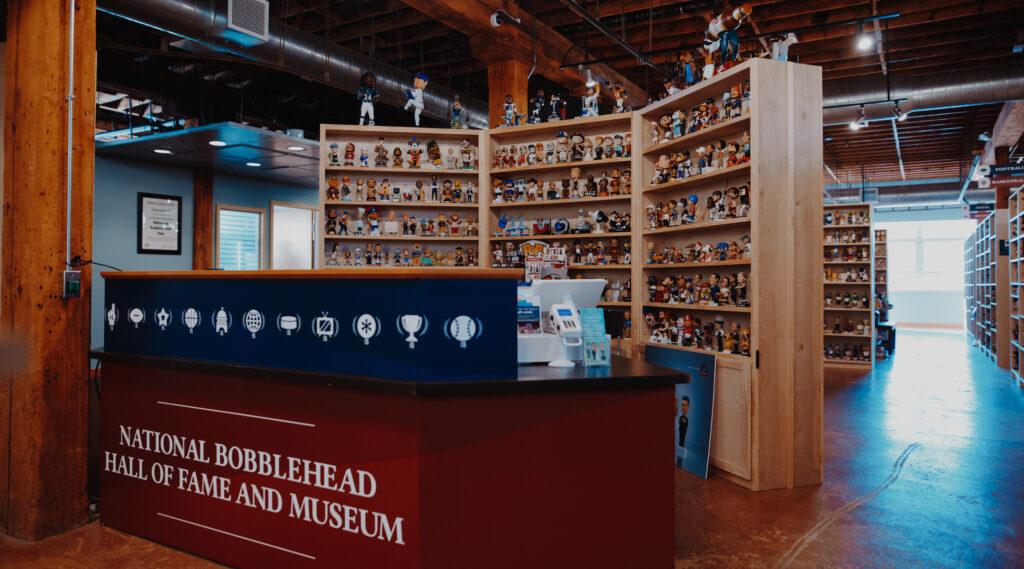 The National Bobblehead Hall of Fame and Museum. (Courtesy of the Bobblehead Museum)

Do you have a personal favorite bobblehead?

The one of [our friend] Michael is sort of the one that sparked the whole idea for the museum, so that’s my sentimental favorite. He’s also Jewish. We didn’t meet because of being Jewish, we just saw him around campus when we started going to school and got to know him. Then we got to know his family, and found out we went to the same congregation.

What has the reception been to the museum? How did the pandemic impact your work?

We’ve been blown away by the reception. We’ve had visitors from all 50 states and I think 25 different countries.

We opened on February 1, 2019, and then closed for about 14-and-a-half months in March 2020 because of the pandemic. Luckily we were able to produce a ton of bobbleheads during that time. In the beginning of April was the first Dr. [Anthony] Fauci bobblehead. That one became our best-selling bobblehead within like a week. Now we’ve raised over $300,000 for Protect the Heroes, which is administered by the American Hospital Association to get resources to first responders. So we were able to keep busy, keep everybody employed that works for us, and also do something for a good cause during the pandemic.

With some unique collections, there can be subcultures that develop within particular groups — the cult-like popularity of the band Phish among Jews comes to mind. Is there any bobblehead subculture that you’ve seen?

There definitely are various bobblehead subcultures. There’s definitely people out there who collect Jewish figures and bobbleheads. Or usually it’s their favorite team or player. There are definitely Grateful Dead [bobbleheads] — quite a few different bobbleheads, and people try to collect all of them. There are people who are political, they want all the presidential- or historical-related.

The Wisconsin Jewish Chronicle did a story, and we sent them pictures of the different Jews that have been depicted in bobbleheads. Sandy Koufax, Ruth Bader Ginsburg, a member of KISS, a wide variety of people. It’s sort of fun to see, there’s more [Jews] than we had anticipated when we were going through the list.

How do you decide who to make?

Every day we’re coming up with new ideas. Staying in tune with the news, social media and trending topics is definitely helpful. But then we have a long list of general ideas. Like, there hasn’t been a turkey bobblehead in a long time, and we have a series of bobbleheads where holiday characters are sitting on a shelf. So we have a turkey on a shelf coming out for Thanksgiving. Things like that, we’ll identify sometimes years in advance. A lot of them take some time to come to fruition. But it’s more, what do we think people will enjoy or buy? And we go from there.

How did you decide to create the Hanukkah bobbles? What is your goal with the products?

It was probably around this time last year, sort of close to Hanukkah, and we were thinking, there hasn’t really been anything Hanukkah-related when it comes to bobbleheads. And I mentioned to my aunt who lives in Omaha, she works at the [Jewish Community Center] in childcare there, and she really liked the idea and mentioned it to a few other family members and they thought it was pretty cool. So we had a rendering made, and we went through some different iterations of the design, and thought, yeah, this would be pretty cool.

You go to Target or different stores, and you see a little small display of Hanukkah-related merchandise and then aisles of Christmas stuff. We could definitely help increase that assortment. They’re not going to be at Target or Walmart this year, but it could be something that in future years could be added to that assortment for a broader audience to see and to purchase. 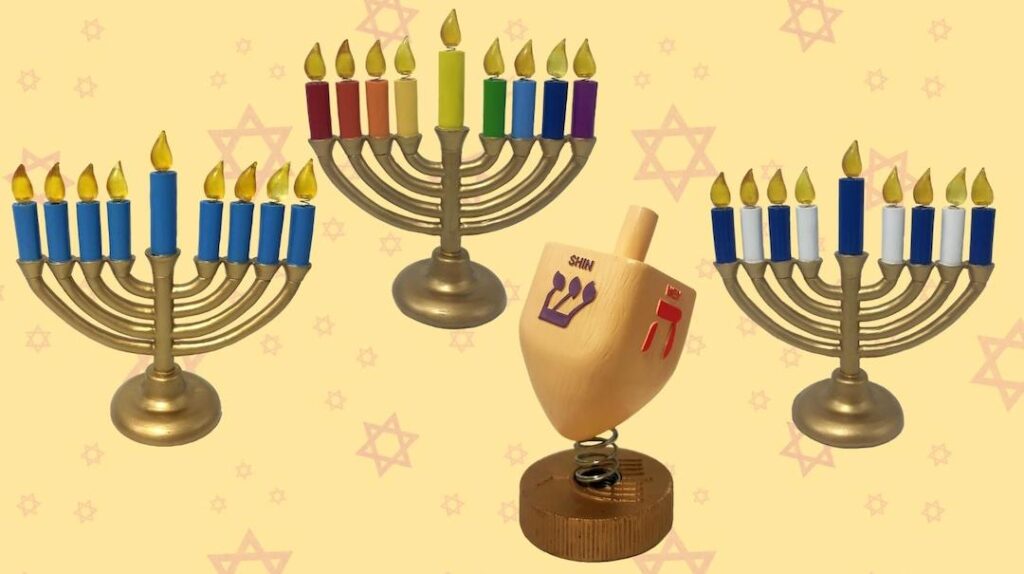 Are there any other Jewish holidays that you think would be particularly conducive for a bobble?

Yeah, I think my aunt actually sent a list. There were some characters like Judah Maccabee. We could do Purim. We’re sort of waiting to see how the Hanukkah bobbleheads go. There’s also some other fun things that we could turn into bobbles. A bobble hamantaschen just came to mind. But I don’t know, it might get people to try to eat it or something. We’ll put a warning on the package.

A lot of your products and launches are connected to charities. Why is it important to you to use the bobbleheads to support these causes? Does your Jewish identity have any impact on that?

I think it probably does have something to do with my upbringing. Being taught to give back, and taught about tzedakah [charity]. And we’ve seen other bobblehead companies start to do the same thing, and they hadn’t done it in the past, so I think we’ve actually inspired other people. We’re not doing it to boost the sales, but we’ve seen that when it has that good cause, it can definitely help boost the sales and boost the excitement around it as well. But we’re really doing it to give back to causes and to get people engaged.

Is the Hanukkah launch connected to a charity?

We haven’t connected this one to anything as of yet, but we’ve done things after the fact as well. Bernie Sanders, we did the inauguration bobblehead with his mittens, and we didn’t realize it was going to take off like crazy. We ended up making a five-figure donation to Meals on Wheels Vermont, which is the cause that he donated to from the proceeds of the mittens. There’s a good chance we’ll do something after the fact.