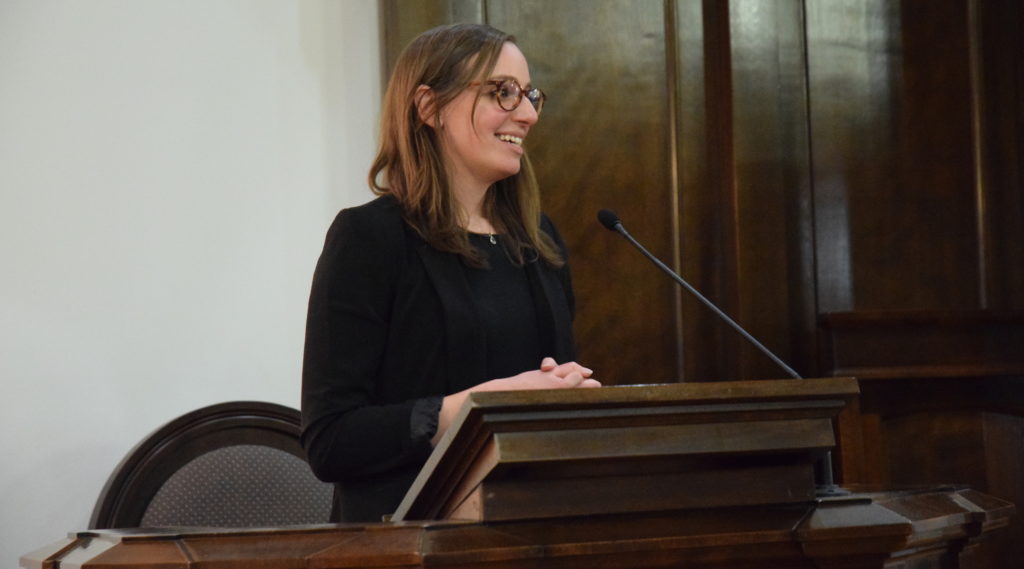 NEW YORK (JTA) — Rabbi Rachel Rubenstein knows that in the age of Kickstarter, getting young people to give to a Jewish federation can be a hard sell.

“In today’s culture, we can go straight to the GoFundMe, and fund so hyper-specifically what you want to fund,” she told JTA last month. By contrast, “donating to a Jewish federation is your statement saying that ‘I’m part of a larger community, and there are needs other than my own and priorities other than my own that I want to support.’”

That’s the kind of thing you would expect to hear from a typical fundraising executive. But Rubenstein is not your typical fundraising executive: At 27, the new executive director of the Jewish Federation of Greater Orange County in New York State is perhaps the youngest top professional in the system, and is trying making the case to her peers that donating to a local federation is in some ways “counter-cultural” in its own right.

Rubenstein was named to her current position in September. She had been working at the federation part-time for a year, coordinating its PJ Library program for engaging young families.

Shortly after Rubenstein came on full-time as director of education and engagement after her ordination, the executive director at the time stepped down abruptly, and the federation, which has a $400,000 budget, was left scrambling for options.

Rubenstein emerged as a frontrunner, but the board was concerned that she was ordained only months earlier and had limited work experience, said its president Carla Wise. But those worries were quickly allayed.

“Without being asked, she just picked things up. She took initiative,” Wise told JTA.

Rubenstein had also worried that her age could be seen as an impediment.

“I had that fear, coming in, that people would look at my age and look at my stature and think ‘what’s going on?’” she said.

But her fears didn’t materialize.

“At least in our community the older people who have been involved forever are so excited and hungry for a younger person to come in and reenergize the community,” she said.

Federations act as community chests raising money for local Jewish agencies and Israel. In recent years their base of support has shrunk dramatically, even as they continue to raise in excess of $1.5 billion a year. The decline of interest among younger Jews for umbrella giving is seen as a factor.

Federations aren’t the only ones dealing with low engagement from young Jews, according to Gary Zola, the executive director of the Jacob Rader Center of the American Jewish Archives and a professor of at the Hebrew Union College-Jewish Institute of Religion in Cincinnati.

“All established Jewish organizations are feeling this decline of interest, particularly acute in the younger generation, and the established leadership is very aware of this and is groping for answers to this problem,” he told JTA.

The trend isn’t unique to the Jewish community — religious groups around the country are facing similar issues, Zola said. Pew surveys have shown a decline in people affiliating with religious groups, with a 2012 study finding that a third of American adults under 30 are religiously unaffiliated. Jewish federations aren’t religious groups per se, but historically there has been a high correlation between Jews who belong to synagogues and those who give to local and global Jewish causes.

In a small community like Orange County, federations also work as conveners. Rubenstein has focused on engaging young families, through a monthly meetup program for parents of Jewish preschool-aged children and social media campaigns.

Another program she is exploring would bring training sessions on how to use naloxone, an emergency drug used to treat opioid overdoses. Orange County has one of the highest opioid abuse death rates in New York state.

Rubenstein also spends a significant amount of time on combatting anti-Semitism in the area, which is an hour or more north of New York City. Several times a month, she receives calls from parents whose kids have been targeted in school including with anti-Jewish comments and swastika graffiti. She works with school officials to bring Holocaust and anti-bias education training to their schools.

Witnessing anti-Semitism was a first for Rubenstein, who grew up in Northbrook, outside Chicago, and attended Jewish day schools in the area.

“I had never experienced any of this overt anti-Semitism,” she said. “It really came as a shock to me when I moved here.”

She attributes the incidents to the fact that the county has a small Jewish population and that there is a lack of education about Judaism.

After graduating from Washington University in St. Louis with a degree in international studies and political science, she worked for a year at a local coffee shop before moving to Los Angeles to attend the Conservative movement’s Ziegler School of Rabbinic Studies. There, she met fellow student Marcus Rubenstein, who later would become her husband.

In 2015, Marcus was ordained and received an offer to serve as rabbi at Temple Sinai in Middletown, in Orange County. The couple relocated there and Rachel transferred to the Jewish Theological Seminary, where she completed her rabbinical studies.

She always knew that she did not want to work as a pulpit rabbi and says she “fell in love with the nonprofit world” after doing internships in day schools.

Rubenstein, who in her free time enjoys crafts, crocheting and hiking with her husband and their two dogs, says that she has found it rewarding to work in a community of which she considers herself a part.

“To get the opportunity to work in my community, “ she said, “to really help foster and to help it grow, that has been really exciting.”