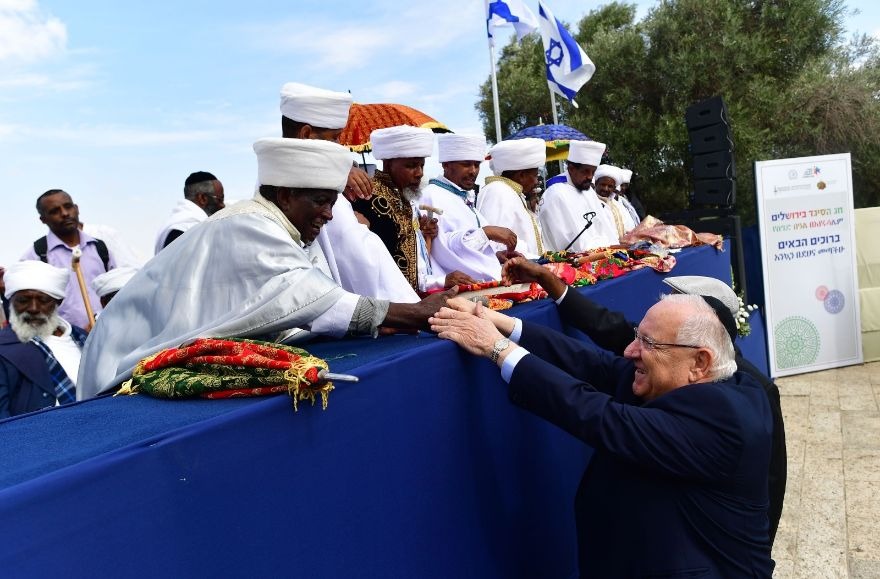 JERUSALEM (JTA) — On a national holiday for Ethiopian Jews, before a crowd of tens of thousands, the president of Israel vowed that the citizens of his country will not discriminate on the basis of skin color.

“We are brothers and sisters, and anyone who tries to undermine that has no place amongst the tribes of Israel,” Reuven Rivlin said in his address Wednesday to mark Sigd, a state holiday since 2008 that marks the Ethiopians’ yearning to return to Jerusalem and Zion.

Ethiopian Jews living in Israel and their supporters gathered for a mass prayer at Sherover Promenade in the Armon Hanatziv neighborhood of Jerusalem to mark the holiday. The promenade offers a wide view of the Temple Mount, and was designated by the Ethiopian community as the central meeting place for the holiday when the first immigrants began to arrive in Israel.

“’Jeena, Jeena, Ierusalem,’ ‘Longing, Longing for Jerusalem’ – this is what we sing to Jerusalem in the prayers of the festival,” Rivlin said. “And those prayers: those ancient, wonderful prayers that you kept hold of and held dear to you and learned by heart and taught your children and passed down the generations. They are prayers of wonder and expectation all the way to Jerusalem.

“You brought a spirit of heroism and nobility that was sorely tested on the difficult journey you undertook, and over the long years of expectation and yearning. And you brought with you an ancient and passionate love for Zion, a love without bounds,” he said.

The holiday had been first observed in Ethiopia, where the Jews led by their elders went to the mountains 50 days after Yom Kippur for prayer and fasting. A festive meal and singing and dancing to celebrate Jerusalem followed the fast.

Rivlin, the first Israeli president to visit Ethiopia, assured the crowd that Israel was working to secure the release of Avera Mengistu, the Ethiopian Israeli being held by Hamas in Gaza.

On Monday, Rivlin and Justice Minister Ayelet Shaked issued a special appeal to the Ethiopian-Israeli community to submit requests for pardons for public order offenses in honor of Sigd. They noted that a government report adopted two years ago described discrimination against the Ethiopian-Israeli community in various fields including law enforcement, health, education and employment. The report found that criminal investigations were opened and charges were brought against Ethiopian Israelis at a significantly higher rate than their representation in the population.

The call for pardon requests was made “Out of a desire to complete a process of healing and closing gaps, as well as to strengthen the trust between the Ethiopian-Israeli community and law enforcement and justice authorities, in honor of the Sigd holiday,” the statement said. “The requests will be considered positively, out of a belief in the significant contribution made by these young people to Israeli society as a whole.”

There are some 135,000 Ethiopian Jews living in Israel.

Some 8,000 Falash Mura, who claim Jewish descent, remain in Ethiopia awaiting permission to immigrate to Israel, most of whom have some family members in Israel. In October, Israel’s Cabinet approved a plan to bring some 1,000 of the Falash Mura who have children living in Israel to the country.

The 2019 state budget, which was approved by the Knesset in March, does not include funds for Ethiopian immigration, including the long-term costs of acclimating the immigrants.