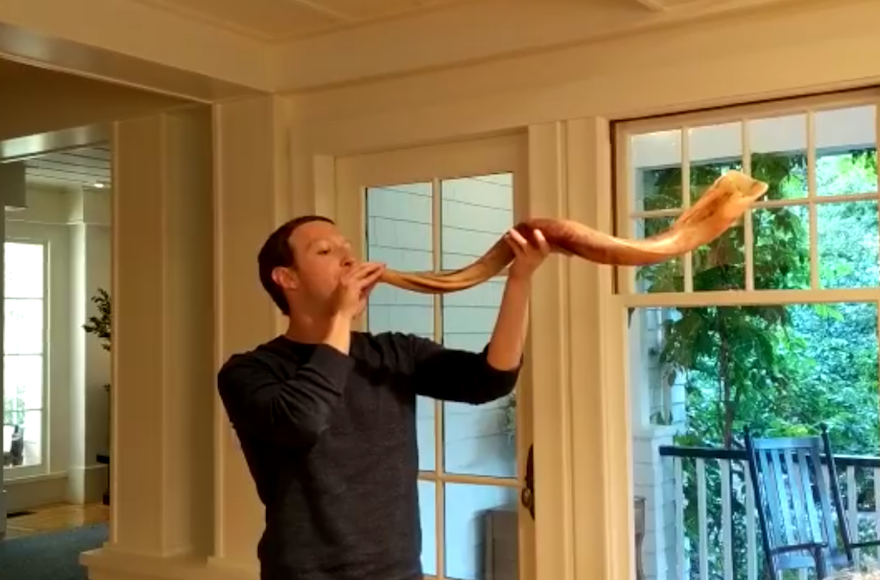 (JTA) — Facebook founder and CEO Mark Zuckerberg posted a video of himself blowing a several-foot-long shofar.

Zuckerberg executed a perfect tekiyah-teruah-shevarim combination on the twisted ram’s horn as one of his daughters is heard crying in the background.

The video was posted on Monday evening, the second night of Rosh Hashanah, under the heading “Shana tova and a sweet new year!”

“I got a little carried away on my teruah,” he later quipped in the comments section.

Many of the comments wished the billionaire a shanah tova (happy new year) in return.

“It’s ok to toot your own horn once in a while,” read another comment.

Zuckerberg had the opportunity to educate some of his Facebook followers, after several asked about the shofar and what Rosh Hashanah is. One follower pointed out that it was also the New Year on the Muslim calendar, educating Zuckerberg as well.

The post has had some 1 million views and more than 8,200 comments.

Zuckerberg has posted snippets of his Jewish life in the past. In May he posted a photo of himself and his wife holding a tray of homemade hamantaschen. “Baking hamentashen. Chag sameach! — celebrating Purim with Priscilla Chan,” read the post.

In a Facebook post in December 2016, Zuckerberg said he was once an atheist but now believes that “religion is very important.” The post came after he wished his followers a “Merry Christmas and Happy Hanukkah” on Dec. 25, 2016. Zuckerberg’s wife practices Buddhism.

In September 2017, Zuckerberg posted a photo on his social network of himself giving his baby daughter Max a kiddush cup that he said was a century-old family heirloom that belonged to her great-great-grandfather, also named Max. In October 2017, he posted an after-Yom Kippur message on his social network in which he asked forgiveness for the misuse of Facebook in the past year — a reference to criticism the social site received after the extent of how deeply Russian hackers used Facebook to manipulate the 2016 election was revealed.