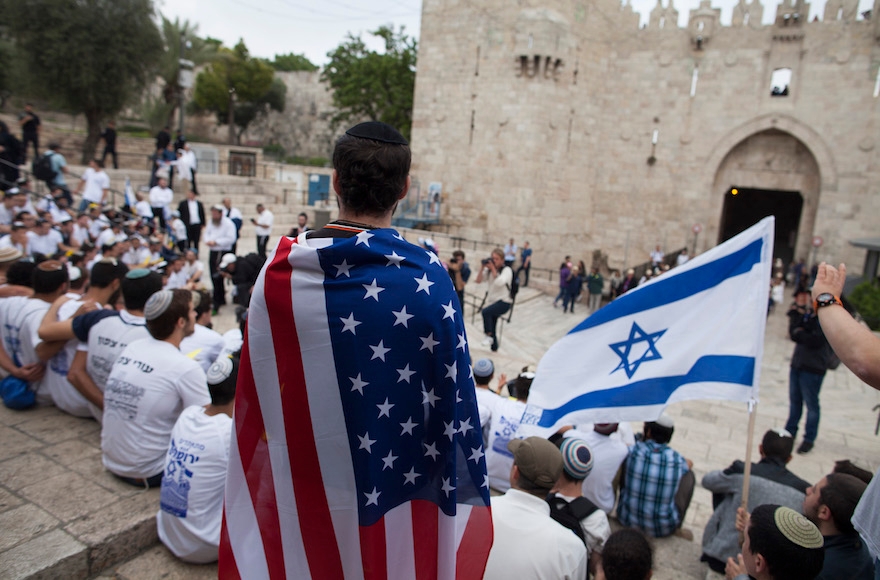 A man wearing an American flag outside Damascus Gate in Jerusalem, May 13, 2018. (Lior Mizrahi/Getty Images)

This article first appeared in The Tell, JTA’s weekly newsletter that highlights all the important Jewish news from Washington. Sign up here to get it in your inbox every Thursday.

(JTA) — A poll commissioned by a new group founded by Jewish Democrats, the Jewish Electorate Institute, found that Jewish voters favor Democrats over Republicans, 74-26 percent. Only 25 percent approve of the job Trump is doing, while 75 percent disapprove.

The numbers on Democrats and Republicans line up with polling since the George W. Bush presidency. Jewish disapproval of Trump has been a thing since his 2016 campaign.

That’s a majority of 59 percent who say they are comfortable supporting Israel and also criticizing its government. (Also, 92 percent of voters say they are supportive of Israel, belying the noise generated by fringe anti-Israel groups who say they are more representative of where Jewish Americans are heading.)

That may not go down well on the Israeli right, which has traditionally bristled at Jewish criticism of Israeli policies as a special kind of betrayal.

Nevertheless it’s a posture that will likely define U.S. Jewish-Israel relations going forward, as seen in our roundups this week of Jewish nominees — Democrats and Republicans — in the U.S. House of Representatives and last week’s roundup of Jewish Senate candidates.

Of 41 Jewish Democrats running in the midterms, 17 accept the endorsement of J Street, the liberal Jewish Middle East policy group whose very ethos is supporting Israel while criticizing its government.

J Street came up when Republican Sen. Ted Cruz debated Rep. Beto O’Rourke this week: Cruz blasted his Democratic challenger for accepting support from a group he called “rabidly anti-Israel.” That kind of attack may resonate among Christian evangelicals in Texas (the home state of Christians United for Israel), but seems less likely to make inroads among liberal and centrist Jews.

The post Majority of American Jews say you can support Israel and criticize its government appeared first on Jewish Telegraphic Agency.